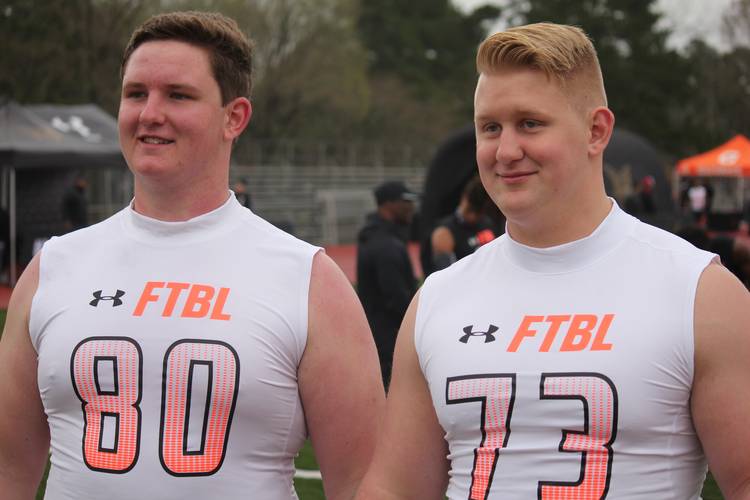 Chad Lindberg (left) and Logan Parr are among the state's top offensive linemen in the 2020 class. (Mike Craven)

Broughton is the best defensive lineman in the state for the 2020 cycle. He’s still new to football compared to most prospects, giving him a higher ceiling to reach once on campus. Broughton can play end or tackle, though his frame suggests that he can carry 300 pounds without losing athleticism. Texas is clearly in the lead for Broughton and a strong official visit gets Texas one step closer to landing its top priority along the interior of the defensive line.

Lindberg is one of two missing pieces for Texas’ offensive line class in 2020. Lindberg and Galena Park North Shore four-star offensive tackle Damieon George are the top two targets with three interior linemen already committed to the Longhorns. Lindberg is the top-rated tackle in the state. His brother attends Texas and he’s grown close with the current commitments.

Texas wants more recruiting success in DFW and Thompson is one of the top prospects in that area. Duncanville is home to multiple Texas targets in the 2020 and 2021 classes. Landing Thompson could help with the other targets. Thompson is a hybrid safety/linebacker. He’s perfect for the Joker position manned by B.J. Foster.

Garth plays offensive tackle for Port Neches-Groves, but he said this week that UT offensive line coach Herb Hand wants him at guard once he arrives on campus. Garth is due for a rise in the rankings in June after reshaping his body. He’s gained strength and remains one of the most athletic big men in the 2020 class.

Majors is a bully along the offensive line with the potential to play guard or center once he gets to Austin. His lower body is massive and strong. He’s continually improving his technique and is used to pass blocking since he plays left tackle for Prosper.

Parr is a similar prospect to Majors. He can play guard or center. Majors and Parr are close to Lindberg and plan to convince the big offensive tackle to join them in Austin. Parr was the second commitment of the 2020 class.

‘We’ve got to come play and we’ve got to ball’: Texas heads to Kansas for crucial Big 12 series

No. 2-ranked Texas men sweep past Tennessee Tech in first round of NCAA tennis