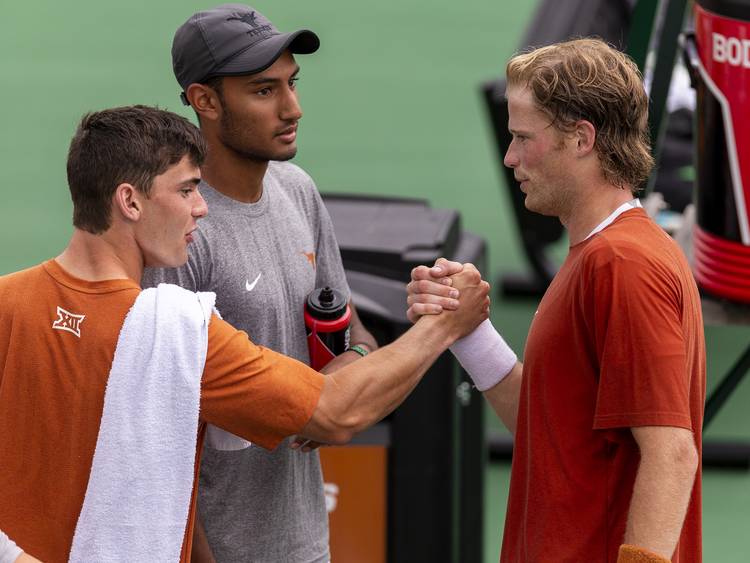 Texas Christian Sigsgaard, right, celebrates finishing singles competition against Tennessee Tech with Johnny Goodwin, left, and Nevin Arimilli in the first round of the NCAA Tennis tournament with at the Texas Tennis Center in Austin, Friday, May 3, 2019. [Stephen Spillman for Statesman]

Instead, everything went smoothly and quickly. The No. 2 ranked Longhorns played well enough to beat the afternoon rain, and Tennessee Tech, advancing through the first round of the NCAA Tournament with a 4-0 victory at the Texas Tennis Center.

“I think our guys did a pretty good job of being ready, and playing hard,” said Berque, an assistant who became head coach when Michael Center was fired in March for his role in a national college admissions scandal. “For the most part we played at a pretty good level.”

In a second-round match scheduled for 3 p.m. Saturday, the Longhorns (24-3) will meet the winner between Alabama and South Florida, Nos. 23 and 37, respectively, in the Intercollegiate Tennis Association rankings.

Alabama and South Florida began at the same time as Texas and Tennessee Tech, noon, but their match was longer, more competitive, and delayed by rain after five of the six singles matches had completed the first set. After a delay of more than two hours, they began again but then had another delay. The matches were moved to indoor courts Friday evening at the UT Golf Club.

The rain actually helped out in one way, forcing postponement of Texas A&M’s match in College Station, which made officials available to work in Austin, allowing for 12 simultaneous matches instead of six, all four teams on courts.

“We had to have an official on every court,” Berque said. “Otherwise, we probably would have had to wait for the other match to finish. Could be an extremely long day, or long night.”

“It’s never easy playing the first match in the NCAAs, but it helps when you are hosting,” Sigsgaard said. “You are kind of used to the courts and everything.”

The Longhorns’ No. 5 guy, Colin Markes, was next to finish, beating Wenceslao Albin 6-0, 6-2. Then Yuya Ito clinched the match for Texas by winning No. 2 singles against Carlos Vicente 6-2, 6-3 before Longhorns Harrison Scott and Chih Chi Huang, leading 5-3 and 5-4, could finish.

Ito said there is no competition among teammates to finish off the other team, as he did, adding, “We all want to win, but all I can focus on is working hard every point.”

Texas captured the doubles point that is awarded for winning two of the three one-set matches. The Longhorns’ No. 1 team of Scott and Sigsgaard, ranked No. 5 in the country, defeated Vicente and Elias Grubert 6-2.

Close behind them, the Longhorns’ No. 3 team, Ito and Johnny Goodwin, polished off Tosetto and Lucca Silva, also 6-2, leaving the No. 2 match unfinished with Texas ahead 5-2.

Berque made some alterations to his singles and doubles lineups Friday. Goodwin, a senior, was promoted from the bench to playing doubles with Ito.

“He hasn’t had that many opportunities this year, and he’s been consistently one of the hardest workers on our team,” Berque said. “He not only got a chance to play but clinch the doubles point for us.”

Huang, a freshman, was removed as Ito’s doubles partner but replaced senior Rodrigo Banzer in No. 6 singles.

“I did want Chih Chi, as a freshman, to get that experience,” Berque said. “And he was playing above Rodrigo for most of the season.”