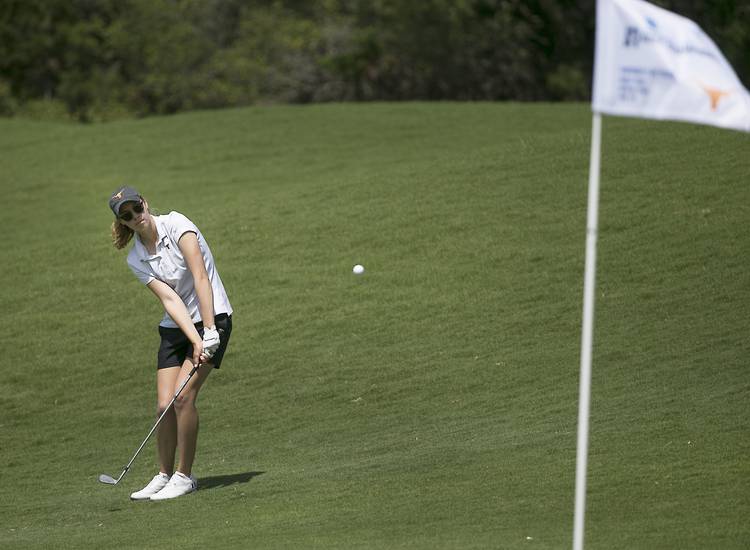 Texas junior Emilee Hoffman is only 21 years old, but she might feel a little older whenever she steps into the tee box these days.

Since the roster for the women’s golf team at Texas has only three juniors and one senior, Hoffman is a veteran among the Longhorns. She is the only upperclassman who will travel with the team to its NCAA regional, which gets underway in Norman, Okla., on Monday. Joining Hoffman at the Jimmie Austin OU Golf Club will be sophomores Kaitlyn Papp and Agathe Laisne and freshmen Hailee Cooper and Sara Kouskova.

“It doesn’t really feel like I’m the old lady, but they probably think I am,” Hoffman said last week.

Don’t let Texas’ youth confuse you. These Longhorns have grown up quickly. UT enters its regional ranked second in the WGCA poll. Only USC, which is in a regional hosted by Washington, is ranked higher.

The top six teams from each of the NCAA’s four regional tournaments will compete for a national title May 17-22 at the Blessings Golf Club in Fayetteville, Ark.

Joining Texas and the host Sooners in the 18-team regional field are No. 5 Wake Forest, No. 11 Florida and No. 15 Arizona State.

Texas is coming off a 37-stroke victory in the Big 12’s tournament. Led by Laisne, the Longhorns claimed the first four slots on the individual leaderboard. Laisne became UT’s first conference champion since Madison Pressel in 2011.

“I think we’re all doing pretty well individually,” said Papp, who competed at Lake Travis as a high school golfer. “All of our games have been in good shape this season. Everyone’s been working really hard. Hopefully (it will be) a good experience at regionals.”

The Big 12 tournament was UT’s fourth victory of the season, a feat last accomplished by the program during the 1992-93 season. Cooper, Laisne and senior Maddie Luitwieler have all posted the lowest score for UT during those four wins.

“It helps a lot because we had more pressure there,” said Laisne, a native of France who has already participated in three of the LPGA’s major tournaments. “For the other tournament, we can implement what we learned from that tournament to the others. It was good also to see how good we were compared to the people that play only in Europe or only in Asia.

Texas coach Ryan Murphy admits he has a tough time living in the moment and is often thinking about what’s next. With the possibility of those young golfers sticking around for a while — “They all want to graduate, I think” Murphy said — Texas could be primed to make a run in the upcoming years. UT has never won a women’s golf national championship; its best showings were runner-up finishes in 1993 and 2002.

But why can’t the future be now?  Is this Texas team capable of contending in the upcoming weeks?

“Yeah, for sure,”  Laisne asserted.