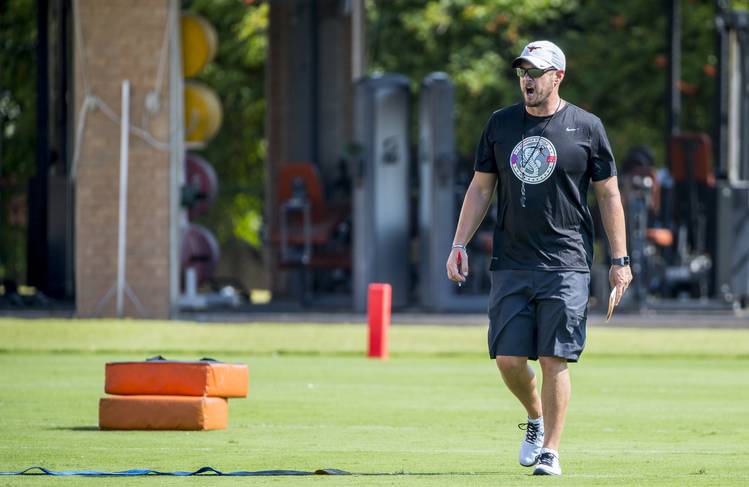 Texas coach Tom Herman directs plays during a practice at the Denius Fields on Aug. 3, 2018. RICARDO B. BRAZZIELL / AMERICAN-STATESMAN

The power brokers in Texas high school football have always been the head coach. To recruit a player, a college went through the head coach to gather information and offer a scholarship. The growing industry of recruiting services and 7-on-7 national teams is slowing eroding that power. The response by the Texas High School Coaches Association is a term called straight line recruiting.

The premise is simple: Texas high school coaches want college coaches to go back to using them as the avenue between a prospect and a university. The goal is to keep high school football from going the way of high school basketball. The AAU circuit neutered the importance of the high school basketball coach because it’s easier to deal with one AAU coach with 20 top prospects than travel to each of those 20 schools and build individual relationships.

The top trainers and 7-on-7 coaches in Texas are on a similar path and offer college coaches the same thing as an AAU coach. It’s easier to build contacts with a 7-on-7 coach who spends time with 30 of the best prospects in the area than it is for a college coach to get to 30 different high schools. Texas A&M’s Jimbo Fisher famously met with Ro Simon of Fast 7v7 before any head coach in the state when he took the job with the Aggies.

“For me, it’s nothing against the recruiting sites or 7-on-7 organizations because I think they do a great job promoting kids, but as a college coach, that can’t be your first stop for information on a player,” said Ricklan Holmes, head coach of Tyler John Tyler. No one knows these kids better than the high school coach. You get to know kids by talking to the people who are around them every day, all year long.”

This issue isn’t black and white. The 7-on-7 circuit is painted as shady and reckless despite plenty of shady and reckless behavior in high school athletics. We can’t pretend like transfers just started. More fortunate schools poached top talent from poorer schools before 7-on-7 became a national sport with shoe money. There are worse things for teenagers to do on their off weekends than practice football. The hope of the high school coaches is that college coaches remember that 7-on-7 isn’t real football.

This might be true at John Tyler and Highland Park, two storied programs with plenty of attention on the recruiting circuit. Not every school promotes their student-athletes properly. Social media has changed the game and not every program has kept up by pumping out videos and offer updates. Some schools like Cedar Hill employ recruiting coordinators. It’s something each school needs to curtail the trend toward private assistance.

“The goal is to cut out the middle man,” said Cedar Hill recruiting coordinator D.J. Mann. “It won’t be successful unless the college coaches buy in.”

And that’s the rub. The high school coaches are at the mercy of college coaches continuing to value the relationships with individual head coaches. A coach can’t keep his star player from choosing a school just because that coach doesn’t like the way the school recruited his player. Winning is important, but getting kids to college should be the ultimate goal. The private sector is sneaking into football recruiting within Texas because there was a need, rather it was perceived or real.

“A lot of college coaches feel there is enough info out there about kids with social media and recruiting sites, but you need to come to the source,” Holmes said. “You need to come see who these kids are and where they’re from. Then we wonder why so many guys transfer so quickly. I respect the coaches who call me first. No head coach should find out a school is recruiting one of his players through social media.”

Some of this is admittedly about power. Every one of us who played any level of football knows that a head coach is as much a general of men as he is a coach. The uprising of individuals outside of the profession with influence bugs the coaches. It feels like trespassing. That isn’t the only reason, however. We’re in an age of programs throwing out offers like street flyers and the person most equipped to figure out where a college truly stands with a prospect is the head coach.

“We can figure out what is real and what isn’t with a phone call,” Mann said. “Recruiting is a hard process for young men and the more communication we get with a school, the easier it is for everyone involved.”

Young and the restless: No. 2 Texas heads to OU-hosted regional with eyes on a bigger prize