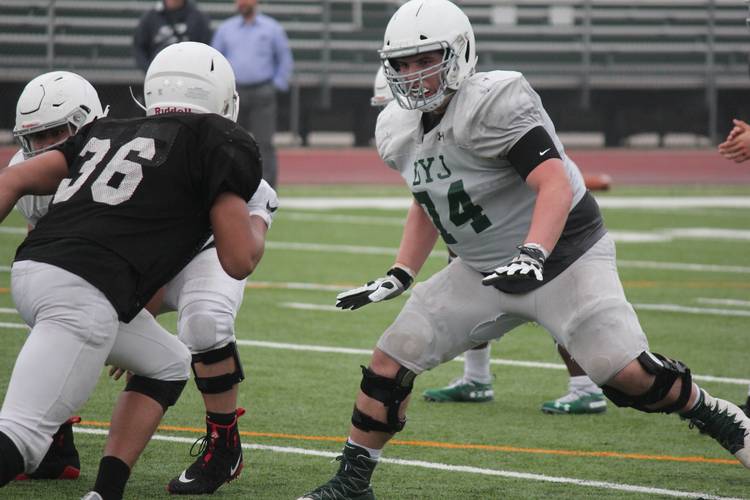 The final whistle of the Orange-White game last month signaled the beginning of a full-court press by the Texas coaching staff in recruiting. The Longhorns hosted six official recruits and a number of unofficial visitors last weekend. The focus was on big men, with Texas playing host to its three offensive line commits, top offensive tackle target Chad Lindberg and defensive tackle Vernon Broughton.

Jake Majors was one of those interior linemen in Austin. The 6-3, 283-pounder plays left tackle for Prosper, though he’s predicted to move inside to guard or center at Texas. Majors is the No. 3-ranked center prospect in the country despite never having played the position at the varsity level. That upsides has him ranked No. 27 on the Fabulous 55.

“When I met Jaylen, we clicked right away. Same with Logan. Getting to hang out with Chad was important,” Majors said. “I want him to know I’m not recruiting him. I want to be friends with him and build a bond with him, and if we do play together, we’ll cherish those years.”

Majors and his Prosper teammates are back in pads working toward 2019 with the dawn of spring practice. The two-time all-district performer is ready to lead with his recruitment in the rearview mirror.

“I’ve taken over a leadership role. I can’t be the young pup anymore,” Majors said. “That means keeping my teammates accountable.”

“It gets you ready for those defensive tackles that are undersized and elusive,” he said of playing left tackle. “It helps you get used to working in space.”

Majors pledged to Texas on Jan. 24, becoming the third member of what is now a five-man 2020 class. He says the decision was easy.

“I wanted to stay in Texas,” Majors said. “Coach (Herb) Hand is a great guy and one of the best offensive line coaches in the nation. If the opportunity presents itself to go to the NFL, he’s the guy to prepare me.”

Prince Dorbah is another UT target who’s planning a position switch. He began spring football with his Highland Park teammates with hopes of repeating as Class 5A Division I state champions. The 6-2, 208-pound four-star prospect excels at defensive end in high school. He’ll use those skills as an outside linebacker with a focus on rushing the passer. That would be the B-backer position that Joseph Ossai is ready to inherit in 2019. It’s a position Dorbah played in the past.

“Feels good back here with a new team and get better,” Dorbah said. “Overall, my game improved a lot since my freshman year. I played outside linebacker when I was younger, so I’ve learned the position and grown as a player.”

It’s currently a two-team race for Dorbah’s commitment, which he plans to make in mid-June or late-July after he receives his ACT score back. He takes the test on June 4.

“It’s definitely between Texas and LSU. It’ll come down to those two,” Dorbah said. “Texas has been doing it for awhile, so LSU has some catching up.”