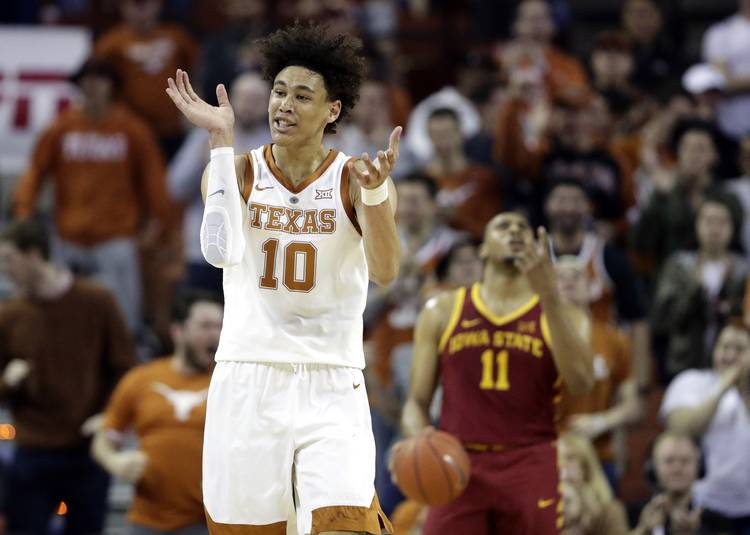 Every college athlete always has that same dazed, just-left-class look whenever they reach the east side of the Texas campus. NBA-bound freshman Jaxson Hayes set his backpack down on Wednesday with a heavy sigh.

“Just left class,” Hayes said, practically grunting. You truly get the sense he’ll pick it up again some day when his basketball career is over.

While most NBA prospects are busy getting ready for the draft, Hayes chose to finish out the spring semester specifically so he would remain in good academic standing.

Oh, sure, the 6-11 big man has been working out and preparing for his future, too. Thursday is his last day in class, and then the real work begins in earnest. The NBA draft scouting combine begins next week, and then he’ll do private workouts for specific teams.

“I don’t think I’ve ever really been nervous for anything,” Hayes said, “so I’m not nervous for this.”

Hayes met with the Austin media one last time on Wednesday before embarking on this journey that Myles Turner (2015), Jarrett Allen (2017) and Mo Bamba (2018) took before him. All were one-and-done big men who were probably not totally NBA ready when they declared for the draft.

Hayes isn’t totally ready, either. Then again, how many 18- or 19-year-old athletes truly are? He was supposed to be a foundational piece for UT’s future. He averaged 10 points and five rebounds per game and flashed wicked athleticism.

He’s a big body with big hands who can protect the rim (71 blocks). Most of Hayes’ points came off dunks and layups, a big reason why he posted a sky-high .728 shooting percentage. He must develop a mid-range shot and get stronger — arguably a lot stronger physically — on the defensive glass.

But NBA scouts love Play-Doh, and that’s what Hayes is, floppy hair and all. The team that drafts him will have someone coaches can shape and mold into whatever they need.

“Obviously, it’s the NBA. Every kid dreams of that,” Hayes said. “I just feel like the position I was in was really good. Kind of hard to pass up on, being possibly top 10. We’ll see how everything goes at the combine and all that, but hopefully it’s top 10. It’s kind of hard to pass on.”

Several mock drafts have Hayes slotted in the teens, just outside the top 10. Even the 15th overall draft pick receives life-changing money, typically in the $6 million range for two years.

Hayes said the knee injury suffered at the Big 12 tournament made him think about the future. Hayes confirmed the injury likely would have kept him out of the team’s NIT championship run even if he was returning for a sophomore year.

He was supposed to be sidelined eight weeks but did not need surgery. “I just didn’t want to do anything to make it worse,” he said.

After Texas won the NIT, Hayes said he’d meet with his parents and coach Shaka Smart, who obviously made a case for staying in school. “We just kept it real with each other,” Hayes said. “I have a great relationship with him, so it’s easy to do that.”

Hayes said he spoke with Turner and Bamba about jumping into the NBA, and they likely gave him pros and cons. He made the final decision fairly quickly, making the decision public on April 11. Hayes signed with an agent and set his plan in motion.

“It was kind of a relief just getting it off my chest and not hiding it from anyone,” Hayes said. “Just getting out it there was good.”

With school out of the way this week, Hayes feels good about leaving UT. He’ll start his NBA journey with a clean slate.