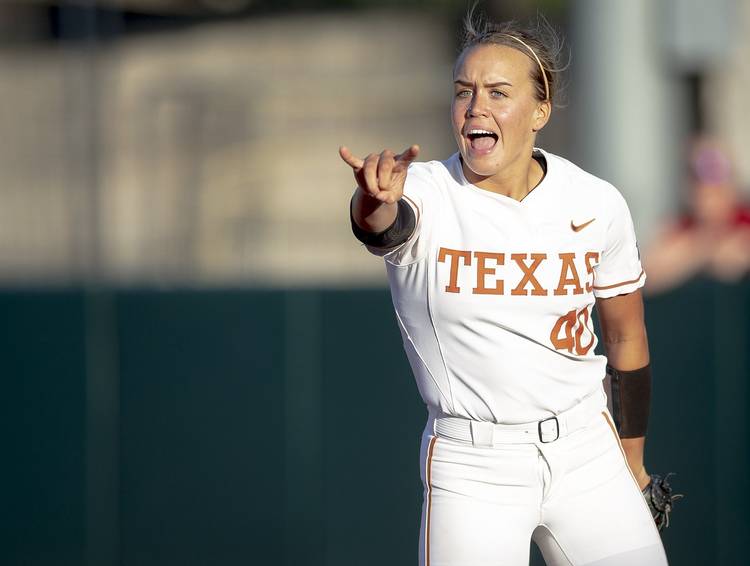 Texas pitcher Miranda Elish (40) communicates to a teammate during a game against Oklahoma on April 18, 2019 in Austin. [NICK WAGNER/AMERICAN-STATESMAN]

Miranda Elish has gotten a chance to pitch on several stages in her college career.

A conference tournament, though? That’s something new.

Elish, who transferred to Texas this season from Oregon, has never played in a conference tournament since the Pac-12 doesn’t have one. The Longhorns are seeded third in the Big 12 tournament, which starts Friday in Oklahoma City.

“I think it’s a good opportunity to improve your game and see where you’re at compared to when you first played the team earlier in the season,” Elish said. “The Big 12 is filled with great teams. What better way to lead us into postseason than playing teams that the Big 12 has?”

Texas (41-12), which went 12-6 in the Big 12, will face Oklahoma State and Iowa State on Friday before moving on to play the team with similar results from a pool featuring Oklahoma, Texas Tech and Kansas. The Longhorns are chasing their first conference title in 14 seasons.  Texas also is attempting to make one last statement to the NCAA selection committee.

The NCAA tournament bracket will be revealed Sunday night. Sixteen teams will be awarded a regional. Should they advance, the bracket’s top eight seeds would additionally have dibs on hosting a super regional. Texas hasn’t hosted a regional since 2013 but likely will get one this year; the Longhorns are currently ranked eighth, ninth and 12th in the NFCA, USA Softball and Softball America polls. Texas boasts the nation’s sixth-best RPI.

Where things get interesting is whether Texas can secure one of those top eight seeds. In its postseason projections this week, Softball America and Fastpitch News respectively had the Longhorns as the sixth and seventh seeds.

“I would be very disappointed if we weren’t in the top 16. I think we have a strong shot there,” UT coach Mike White said. “The (top eight seed), I can understand whatever they come up with.”

Elish is among the players that Texas will lean on as it makes its NCAA case. On Wednesday, she joined second baseman Janae Jefferson on the first team of the Big 12’s all-conference squad. This spring, Elish is 14-8 with a 1.71 ERA with a conference-leading 188 strikeouts. Opponents are hitting just .167 against her and she no-hit Iowa State on March 22.

UT catcher Mary Iakopo, who played with Elish at Oregon last year, said her teammate is the “most competitive person I’ve ever met in my entire life and that says something. No one’s going to beat her in anything.” Elish has indeed not been beaten by many batters this season. She also has been a thorn in the side of her fellow pitchers.  Limited to 16 at-bats by an ailing ankle in 2018, Elish is hitting .330 with 25 RBIs and six homers.

“My pitching isn’t dependent on my hitting; my hitting’s not depending on my pitching,” she said. “I like it because if I’m not pitching well or I feel like I’m not doing what I can for my team, I can pick them up with my bat and vise versa. If both are working that day, then hey, I’m in luck and I’m doing the most that I can for my team.”

Elish won’t be the only pitcher making an introduction in Oklahoma City this weekend. Thanks to the less-punitive rules in softball, transfers have become more commonplace. In fact, the Big 12 tournament’s top four seeds are led by talented arms who played elsewhere in 2018.

Oklahoma has two pitchers in Giselle Juarez (21-0, 1.32) and Shannon Saile (10-1, 1.08) who previously pitched at Arizona State and Florida International. Oklahoma State’s Samantha Show (16-7, 2.49) spent the past three seasons at Texas A&M. Missy Zoch, who starred at nearby La Grange, leads Texas Tech in ERA (2.51) and strikeouts (150) after starting her career at DePaul.

“(Show is) never satisfied, and that makes us better. We needed a fireball personality in the circle to make us good, and make us who we are,” Oklahoma State utility player Taylor Lynch told the Oklahoman in April.

The Dotted Line: Texas squarely in mix for uncommitted members of the Fabulous 55