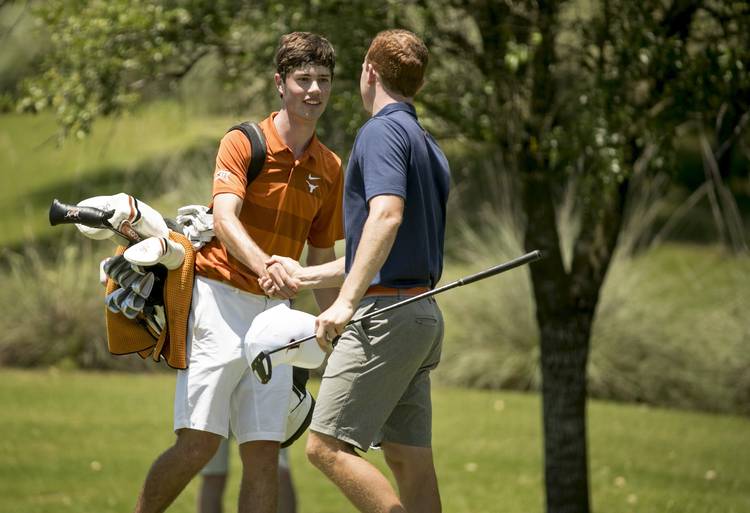 Cole Hammer of UT shakes hands with RJ Manke of Pepperdine after their round at the NCAA Austin Regional golf tournament at the University of Texas Golf Club on Monday May 13, 2019. [JAY JANNER/AMERICAN-STATESMAN]

The Texas men’s golf team doesn’t have an abundance of experience. But talent, well, that’s a different story.

The Longhorns, led by three freshmen, shot 6-under-par 278 on Monday to tie Pepperdine for the first-round lead in the NCAA Austin Regional at the UT Golf Club. TCU is two shots behind them and Arkansas trails by four.

Advertisement
Fourteen teams are competing in the event, with the top five, and one of five individuals who qualified without a team, advancing to the NCAA Championship scheduled for May 24-29 at Blessings Golf Club in Fayetteville, Ark. USC, the No. 2 seed here behind Texas, is tied for sixth at 6-over, six shots out of fifth place.

Texas struggled at the start, falling to 2-over par around the time that all five Longhorns — the best four scores count — completed the front nine in different groups. They trailed the early leader, Arkansas, by eight to 10 shots at times. But serving as host school allowed the Longhorns the benefit of context.

“We play a lot of golf out here,” Hammer said. “And I wasn’t worried because we shoot a couple over on that front nine every now and then, and the back nine is gettable.”

Pierceson Coody scorched the back nine with four straight birdies beginning at No. 12, and then another one at 17. His birdie binge began with a chip-in at 12.

“After that, things fell into place and the game seemed easy,” Coody said.

Hammer started a streak of five birdies in six holes beginning with a downhill, 18-foot putt at the par-5 ninth. After making it to 4-under at the par-5 14th, he hit a snag — some brush, actually — pulling his tee shot on the par-3 16th to the edge of a hazard.

Rather than take a drop, and a one-stroke penalty, Hammer got down on his right knee and smacked the ball left-handed. The ball skidded across the green, off the putting surface, and he made double-bogey.

“It would have been a tough up and down even if I had dropped,” he said.

Ghim and Scheffler, trying to earn regular playing status on the PGA Tour, tied for 12thand 35th Sunday at the Byron Nelson in Dallas.

That type of talent and experience made life easier for Texas coach John Fields.

“Those are two of the best players who have ever played at Texas,” Fields said. “When you have three young guys like we do, they have a lot of enthusiasm that might make up for inexperience.”

The Dotted Line: Texas squarely in mix for uncommitted members of the Fabulous 55