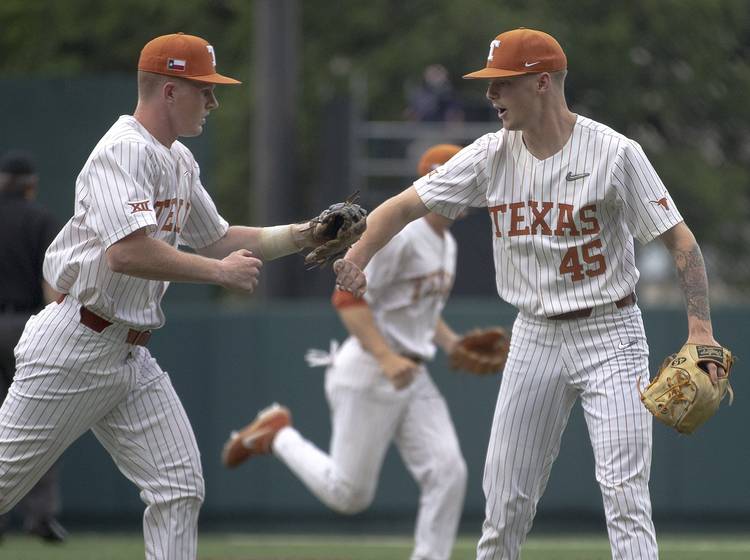 On Tuesday, Texas announced a crowd of 4,672 for its midweek meeting with Incarnate Word at UFCU Disch-Falk Field.

One of the attendees, though, was more than just an ordinary fan. No, this onlooker may have crossed paths with his bust outside the ballpark. Before the first pitch, the special guest signed the program’s “T wall” and met a few players.

And with former coach Cliff Gustafson — he of 1,427 wins, 17 appearances in the College World Series and two national titles from 1968-96 at Texas — watching from a suite, the Longhorns then recorded a 9-0 win. The shutout opened the final week of the regular season for Texas, which starts a crucial three-game series with Oklahoma on Thursday.

Kennedy said he did not get a chance to meet with Gustafson before the game. But with Gustafson at UFCU Disch-Falk Field for the first time this season, the freshman made a good first impression.

Kennedy popped out in UT’s first at-bat, but that was the only time he was retired by one of Incarnate Word’s seven pitchers. Kennedy singled in his next two at-bats, and that second hit plated two teammates. He later scored twice after doubling and drawing a walk.

Kennedy entered the week with a .300 batting average and Tuesday’s effort added 10 points to that total. Kennedy is the only Longhorn within 25 points of a .300 batting average this season. Over the previous 99 years, Texas has no record of a baseball season in which it didn’t have one player hit at least .300.

“I was just seeing the ball well,” Kennedy said. “Our coaches prepared me well for the pitchers we were going to face. We knew what their tendencies were, so I was ready for it.”

Kennedy’s two-run single in the fourth frame gave Texas a 3-0 lead, and the team tripled its score with six runs over the seventh and eight innings. That was enough offense to support the first win of freshman Coy Cobb’s collegiate career. Cobb, who lost his job as UT’s Sunday starter in mid-April, scattered four hits over six innings. The right-hander struck out two members of an Incarnate Word team that ranked 10th nationally in batting average and had not been shutout in 2019.

“Whatever role is given to me, I’ve got to accept it and thrive in it,” Cobb said.

Incarnate Word twice loaded the bases but came up empty on both occasions. With three pitchers mulling in the bullpen in the eighth inning’s top half, Texas kept reliever Kamron Fields in the game after a mound visit with pitching coach Phil Haig. Fields responded and preserved a 5-0 lead with a threat-ending strikeout of designated hitter Lee Thomas.

“We had a little bit of a cushion to deal with, so that was good for him to get out of that,” Texas coach David Pierce said. “We didn’t want to go to the pen there, so it was a big strikeout to end the inning.”

Texas’ record improved to 26-25 with the win while Incarnate Word’s record dropped to 34-18.  Tuesday’s result, though, doesn’t matter much to the big picture. Both Texas, which plays in the Big 12, and the Southland Conference’s Incarnate Word will likely have to win their conference tournaments in order to secure an invitation to the NCAA tournament.

Currently in ninth place in a conference that allows eight teams into its year-end tournament, Texas has two paths to the postseason. If UT sweeps Oklahoma, the Longhorns will extend their season. Texas can also secure a tournament berth if it beats Oklahoma twice and Kansas upends Kansas State three times.