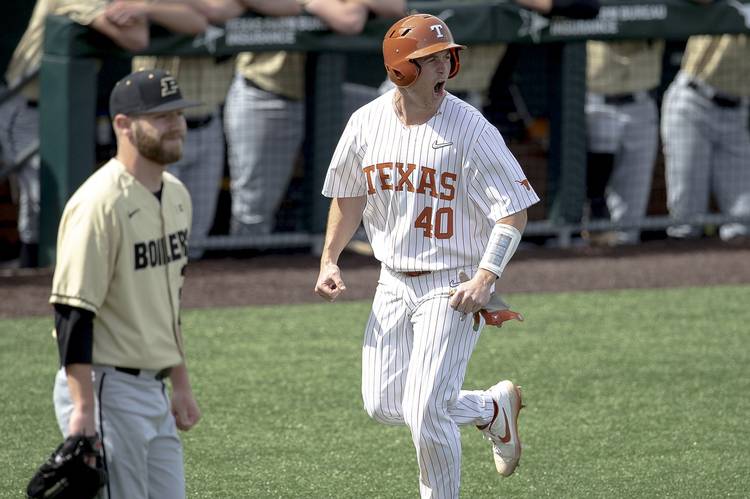 Last week, not much baseball was played on Texas’ campus.

A midweek game against Texas State was called off because of rain. Texas didn’t have any conference games scheduled over the weekend, so the players focused on their upcoming finals while coaches hit the road to recruit. The team was given three days off before a four-hour practice was held on Sunday.

Texas coach David Pierce said Wednesday that he wished such a break would have occurred a few weeks ago, but freshman Eric Kennedy suggested that it was good for the Longhorns.  “(It was important to) refresh our minds, refresh our bodies,” the outfielder said.

One question remains, though. Will that time off help the Longhorns avoid an even longer hiatus?

Texas opens a three-game series against Oklahoma on Thursday night. This installment of the Red River Rivalry will close out the regular season, and Texas (26-25, 6-14 Big 12) is chasing one of the final invitations to the conference’s eight-team postseason tournament. In order to be placed in the bracket, the ninth-place Longhorns must either sweep Oklahoma or win twice while having Kansas State lose three times to Kansas.

Texas returned to the field with a 9-0 win over Incarnate Word on Tuesday. Seven starters drove in a run, and a 13-hit performance was tied for the team’s fourth-best effort of the season. Defensively, Texas had its only error taken off the board by a post-game scoring decision. Four pitchers shut down a Cardinal offense that held top-30 national ranks in batting average, scoring and home runs.

The victory was only UT’s second in a 12-game span. After the game, Pierce dismissed the idea of dismissing Incarnate Word (34-18). A former coach at Sam Houston State, he noted that “I was in the Southland (Conference) for three years and the top of that conference is good.”

“If we just carry what we did last night into this weekend, there’s a very good chance for a sweep,” outfielder Duke Ellis said.

Led by former UT assistant coach Skip Johnson, the Sooners (31-20, 9-12) have dropped five of their last six conference games, their lone victory an extra-inning conquest. Oklahoma has not yet secured a trip to the conference tournament but can do so with a win.

The Sooners lack both power and speed as they have collected the Big 12’s fewest home runs (23) and steals (27). The fielding and pitching statistics, however, rank among the conference’s best. Levi Prater (2.93 ERA, 90 strikeouts) and Nathan Wiles (7-3, 3.81 ERA) have both been honored by the Big 12 this year, and Cedar Park native Jason Ruffcorn leads the conference with 10 saves.

“We have to make them earn it,” Pierce said. “I think they’re a quality team that can play in a regional and win a regional as well as we can. You don’t know where their confidence and their mindset is right now, either.”

Texas will keep its eye on both scouting and weather reports. Rain is in Saturday’s forecast, which is unwelcome news for a Texas team that desperately needs to find three wins. Earlier this season, rain cancelled a game at Baylor in which UT had built a 6-0 lead.

Big 12 rules state that a series’ three games must be played within a three-day window, so Sunday is not an option for Texas-Oklahoma. Pierce said UT has been in contact with Oklahoma. Several options — including a Friday double-header — are on the table.

A tie for individual honors, but Texas men cruise past regional golf field to qualify for NCAAs

The Dotted Line: Who will become Texas’ first defensive commit in the 2020 class?