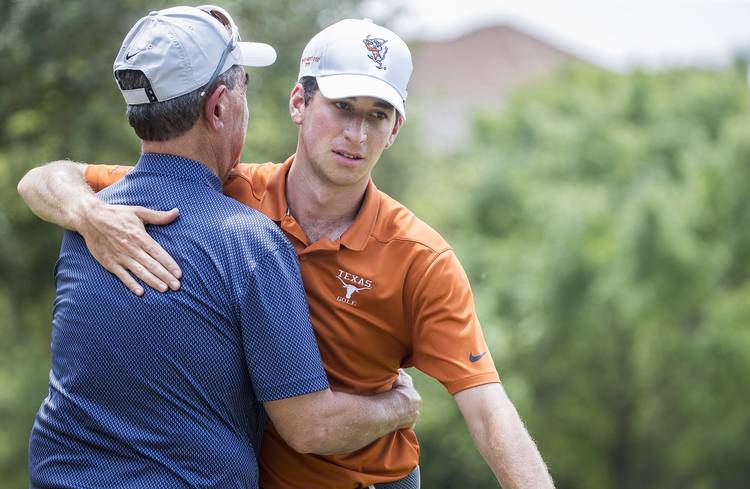 Spencer Soosman of UT hugs his father Dan on the eighteen hole at the NCAA Austin Regional golf tournament at the University of Texas Golf Club on Wednesday, May 15, 2019. [RICARDO B. BRAZZIELL/AMERICAN-STATESMAN]

Just when Texas teammates Cole Hammer and Steven Chervony were asked how they planned to privately break a two-way tie to determine the NCAA Austin Regional golf champion, an intruder showed up.

With Hammer and Chervony finished on Wednesday at 9-under-par 204, TCU senior Stefano Mazzoli made a birdie on his 17th hole — No. 8 at the UT Golf Club — to grab a share of the lead.

So Hammer, a freshman, Chervony, a senior, and Mazzoli will settle for status as tri-champions.

Mazzoli shot 7-under 64, the best round of the week by anybody and two better than Hammer and Chervony on Wednesday, but that didn’t ruin the day for the sixth-ranked Longhorns. Texas conquered its difficult home course to shoot 25-under par for the 54-hole event, beating TCU by 20 shots and Clemson by 24.

Pepperdine finished fourth and USC fifth, the last spot to qualify from Austin for the 30-team NCAA Championship scheduled for May 24-29 at Blessings Golf Club in Fayetteville, Ark. The Razorbacks did not qualify for the tournament they will host, finishing sixth in Austin.

Before this week, the Longhorns had one individual title this season, a tie for first by Hammer, and no team championships. They finished second four times in 11 tournaments.

There is no playoff to break a share for medalist at the regional level. While Mazzoli was still on the course, and the Longhorns didn’t know his score, a reporter asked Chervony and Hammer if they would arm wrestle to determine the unofficial champion.

Chervony, who earned his first individual championship as a Longhorn, countered that he and Hammer might play 18 holes.

Hammer did not go for the arm wrestling suggestion, either.

“That wouldn’t be good for either of us,” Hammer said. “We’re both pretty skinny.”

Joking aside, Longhorns coach John Fields was thrilled with the result.

“I’m happy that we did what we came here to do: Advance to the national championship,” Fields said “The cool thing is the guys really played well. We are always trying to approach our talent level. I think we came close this week.”

Indeed, only 15 of the 75 golfers in the regional shot under par, and four of them were Longhorns. Pierceson Coody finished at minus-2, and his twin, Parker, at 1-under.

Chervony made six birdies and only one bogey on Wednesday. But missing a putt from inside five feet for par at No. 16 cost him the outright title.

Even so, Chervony said, “You could pick at a shot here and there, but I hit so many good ones, it would be a bad thing for me to nitpick. You can always do that.”

One of his best shots, and most daring, came at the par-4 13th. The hole plays 375 yards for golfers who hit the fairway. But there is also the temptation of a shortcut by driving over a pond to the left, reducing the distance to 320. Chervony went for the glory, his ball stopped just short of the green, and he chipped up and made a short putt for birdie.

Chervony said he thought twice about the risk of landing in the water.

Hammer had a chance for solo medalist at 17, but he missed a six-foot attempt for his sixth birdie. (He did not make a bogey).

Hammer then needed to two-putt from 30 feet, downhill, at 18 to preserve his spot atop the leaderboard. He lagged superbly, finishing with a 3-footer.

“I’ve hit that putt a thousand times,” Hammer said. “I knew what I was going to do.”

Back after a lengthy break from baseball, Texas is rested, relaxed — and in need of a rally