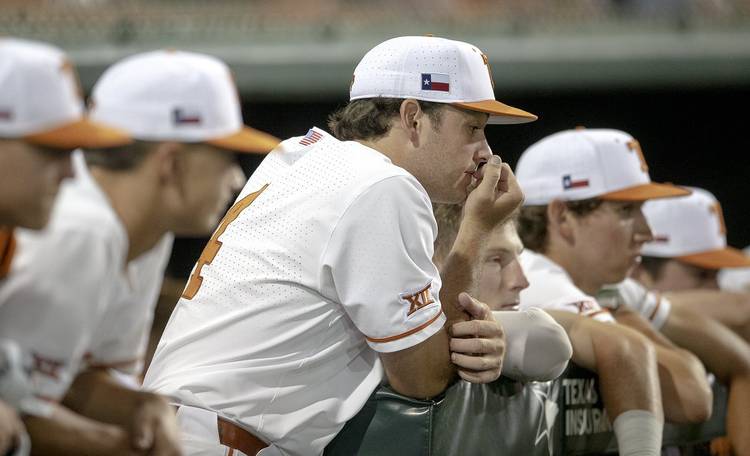 No, the Longhorns’ season isn’t dead yet. But it no longer has much of a pulse, either. Texas’ 4-2 loss means the Longhorns must now beat the Sooners twice on Friday AND Kansas (28-24, 9-12) would need to sweep Kansas State (25-28, 8-13) this weekend in Lawrence just to qualify for the Big 12 tournament next week.

The Longhorns (26-26, 6-15) approached the regular season’s finish line in control of their own destiny, but they were doomed in Thursday night’s Red River opener by a key error and three costly walks.

“Basically, we got what we deserved,” UT coach David Pierce said.

Over the course of a game that lasted only 2 1/2 hours, Texas repeatedly got in its own way. Oklahoma’s first-inning run was set up by a fielding error by shortstop Masen Hibbeler. One inning later, OU’s Tyler Hardman got around the bases on a walk, a balk, a groundout and a two-out soft single. UT starter Bryce Elder then walked two batters who eventually scored in the sixth.

“If you go out and you play clean and you don’t get a timely hit, it’s frustrating, but at least you know that you played both sides of the ball. We just didn’t do that,” Pierce said. “We didn’t pitch well enough. We didn’t play well enough (on) defense to win the game.”

Bested by Oklahoma starter Nathan Wiles, Elder allowed four hits in his 13th start of the season. The right-hander struck out six Sooners. Three of his four walks led to runs and he was also called for two meaningful balks.

Texas committed two errors behind him. Elder, though, put the loss on himself.

“I’ve got to pick people up there,” he said. “Tonight, I didn’t pick up Hibbeler in the first inning and that’s something I’ve got to be better with. I can’t put it on them because they go out and compete for me every single outing.”

Texas stranded runners at second base two times in the first five innings, but finally scored twice in the sixth to cut OU’s lead to 4-2. The Longhorns got singles in each of the final three innings, but couldn’t generate any runs.

In the bottom of the ninth, Ryan Reynolds chased Wiles with a leadoff single. Oklahoma coach Skip Johnson called Jason Ruffcorn out of the bullpen, and the Cedar Park native quickly earned his conference-leading 11th save. He needed only one pitch to get pinch-hitter Peter Geib to hit into a double play to also erase Reynolds. Then Michael McCann grounded out on an 0-1 pitch to end the game.

Texas outhit Oklahoma 8-6. That wasn’t enough to lift the Longhorns, who have lost eight of their conference games by two runs or less.

Around the bases: Oklahoma (32-20, 10-12) qualified for the Big 12 tournament with Thursday’s win. … Due to concerns about Saturday’s weather, Texas and Oklahoma will play twice on Friday. The first game will get underway at 1 p.m., followed by the second game at 6:30 (both will be carried on LHN and 104.9). … With his parents in attendance, Italy native Matteo Bocchi pitched two inning of scoreless relief for UT. … Texas will celebrate its senior day ahead of Friday’s second game. Bocchi, Hibbeler and McCann will be honored alongside fellow seniors Brandon Ivey and Tate Shaw and junior pitcher Donny Diaz.

Having ‘studied for the test,’ Texas softball prepares for three familiar foes in its NCAA regional

‘A void in your life’: How Mack Brown rediscovered himself and his purpose