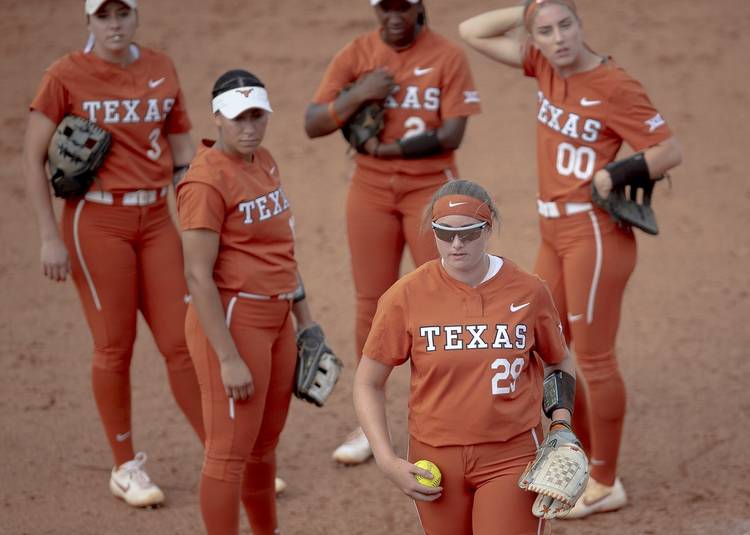 Texas pitcher Shealyn O'Leary (29) walks out of the pitching circle after giving up a two-run home run to Sam Houston State during a college softball game on Friday, May 17, 2019, in Austin, Texas. [NICK WAGNER/AMERICAN-STATESMAN]

Lindsey McLeod grew up across town from McCombs Field. It was the place to be for all local little girls who dreamed of playing softball.

McLeod was a standout at Westlake High School and attended a couple of Texas Longhorn pitching camps.

But she never received a recruiting call from the Longhorns. “They were never interested in me,” she said. Instead, McLeod signed with Sam Houston State.

On Friday afternoon at McCombs, McLeod, the team ace, was in the circle. She helped lead her Bearkats possibly to their biggest NCAA win, a 2-1 victory over the Longhorns.

“I take one pitch at a time, I don’t let all the outside things get in my head,” McLeod said of her complete game in which she allowed only four hits and a walk. “I go out there and do my best, let the chips fall where they fall.”

She kept UT, the region’s top seed, off schedule most of the day. Teammate Tiffany Thompson swatted a two-run homer to deep center field in the top of the sixth to give Sam Houston the lead.

Then McLeod protected the advantage by retiring the final five Longhorn batters she faced. Four of the outs were benign pop ups.

Texas and Texas A&M will face each other in an elimination game. The Aggies are the third seed.

For the first five innings, the Longhorns looked to be in control of the game, although their lead was only 1-0. Catcher Mary Iakopo put Texas on the scoreboard in the fourth inning with a solo homer to left field.

UT’s Brooke Bolinger started the game. She allowed only one hit as she headed into the sixth inning. But Texas coach Mike White thought Bolinger was growing tired in the hot, muggy conditions. So after her 69th pitch, White pulled her in favor of freshman Shealyn O’Leary.

The move made sense, considering O’Leary was the winning pitcher the last time the two teams met. That was back in late February, when the Longhorns won 9-1 in a game shortened to five innings because of the run rule.

With a runner on first because of a Texas fielding error, O’Leary was up 0-2 in the count on Thompson. But O’Leary’s next pitch was high and right over the plate. She said she immediately knew she was in trouble.

Thompson knew it, too.

“I was down in the count — I really wanted to move the runner,” Thompson said. “I saw a good pitch and had a good swing on in it.”

White said it wasn’t fair to blame the Longhorn pitchers for what unfolded Friday. He said the offense needed to help them out. He said the Texas batters did well in practice.