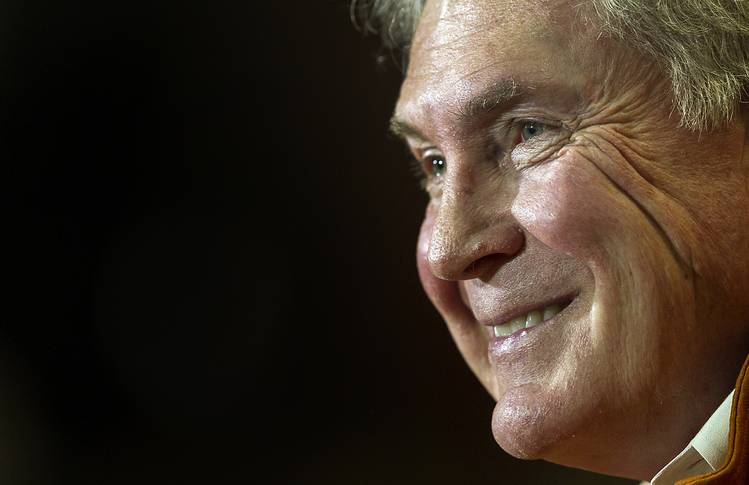 Former University of Texas head coach Mack Brown will be inducted into the College Football Hall of Fame later this year. (Rodolfo Gonzalez/American-Statesman)

Nestled away on the third floor of an upscale Charlotte hotel, the cups runneth over — literally.

Gin. Vodka. Whatever your preference, the lone guarantee is a hefty pour.

As the drinks flow at this soiree, the guest of honor waits in a side room sipping a miniature bottle of water. He’s the lone reason dozens of Charlotte’s wealthiest men and women have gathered here, all of them dolled up in their finest baby-blue blouses and button-downs:

“North Carolina has been trying to fill the void of Mack Brown since 1997, and they are huge shoes to fill.”

That partially explains the turnout. What the former Texas coach accomplished in his decade at Chapel Hill remains untouched in the Tar Heel State. Even factoring in two 1-10 seasons when he inherited the downtrodden program in 1988, Brown won nearly 60 percent (69-46-1) of his games at UNC. The five coaches who followed him didn’t even win half (124-135).

Now, that’s not to say Brown is definitely going to reach the same heights he once did at UNC. Oodles of high-profile college coaches have returned for a second stint at the same school — Bill Snyder at Kansas State, Bill Walsh at Stanford, and Bobby Petrino at Louisville, to name a few — and none have had the same success their second go-round.

Most quietly fade into retirement, leaving their programs as desolate as they found them.

UNC’s higher-ups and donors hope Brown bucks that trend. He arrives with a five-year contract after the Tar Heels’ consecutive nine-loss seasons, so there won’t be panic if the turnaround isn’t immediate… but there does have to be one, and soon.

Functions like these, chock full of bulging wallets, are part of that solution. They’re also Brown’s master craft — even if he doesn’t necessarily think of them that way.

“I’ve always liked it, and I’ve never even thought about it until you asked,” Brown says with a grin, every word coated in his Tennessee tenor. “You know, I’ve done it my whole life. I’m very comfortable with it because it gives us a chance to meet friends who are paying for our program. At the same time, it gives me a chance to say thank you.”

That cuts to the heart of Brown’s second stint at North Carolina: thankfulness. Not that alone, but why he’s thankful.

He gets to schmooze with donors again. He gets to visit recruits’ living rooms, everywhere from Waynesville, N.C. to Wilmington, N.C. He gets to mold young men, teach them go routes and life lessons.

He gets to have purpose again.

And he’s so thankful for that, because it was never a given he’d find it again.

For all the optimism in that hotel lobby, Brown has heard plenty of criticism the first few months on the job:

He’s too old. Out of touch. Gone from the game for five years!

National pundits openly questioned the hire, too. Pat Forde at Yahoo! Sports wrote that UNC should “beware the second act.” USA Today’s Dan Wolken said, “the job of North Carolina’s Bubba Cunningham is supposed to be identifying the next Mack Brown, not reaching for the one who existed two decades ago.”

Those critiques, whether fair or not, at least stem from a logical place. After a decade at North Carolina and then 16 years at Texas, including a national championship, Brown unceremoniously retired from UT in 2013. Never mind that the man helped produce a Heisman Trophy winner and countless NFL draft picks — in a “what have you done for me lately?” sport, Brown’s effectiveness had seemingly passed his expiration date. A scathing Sports Illustrated article in 2015 even blamed Brown’s deteriorating foundation at Texas as the reason for the program’s continued struggles after he left.

The next year he joined ESPN as a college football analyst: tortuously close to his life’s work, but just distant enough to fade to black.

In the meantime, other schools did come calling (Brown declines to mention which). His wife Sally told her husband his options to coach again were in Hawaii, the Bahamas (which does not have a football team) … or back in Chapel Hill.

It’s a Sunday in late November 2018. Brown walks off an ESPN set and sees Bubba Cunningham’s name on his phone.

Larry Fedora, after consecutive 3-9 and 2-9 seasons at UNC, is out.

The Browns were on a plane to Chapel Hill the next day.

So where did this love for North Carolina come from? Brown’s a Tennessee native who went to Florida State, then he coached at seven other schools before ever stepping foot in Chapel Hill. Yet, he sings its praises like some long-lost city. Like some forgotten mecca.

Some of it is Sally. Inside linebackers coach Tommy Thigpen, a three-time All-ACC linebacker during Brown’s first UNC stint, calls her the team’s “associate head coach.” This is the place she and her husband built their life together, after all, their first real stability. A decade’s a long time for memory-making. And …

“Nobody leaves Chapel Hill,” Brown remembers Sally telling him. “People raised their kids when I was raising my kids, and they’re still there.”

Re-assimilating, then, would be easier. Much easier. Even more so considering that the couple has always kept a house in the mountains of North Carolina. After Brown left Texas, they’d even spend January through October every year in little ole Linville, where they could play golf and reminisce in the shadow of Grandfather Mountain.

Friends are one thing — connections are another. Brown has both in spades, blessed with what Brewster calls a near-photographic memory and what Thigpen calls “a genuine love for people.” The coaches Brown knew in the ’80s and ’90s are still around, some with children following their footsteps. It’s not uncommon for Brown to have recruited or coached a current high school coach anytime he makes a home visit.

Even on the off chance Brown doesn’t know the people he’s going to meet, he quickly amends that.

“When you walk away from Mack,” Thigpen says, “you walk away and say, ‘I felt like I’ve been knowing that guy all my life.’ That’s his human connection.”

Inside Mack Brown’s return to recruiting

That natural networking — specifically, how Brown harnesses it — is perhaps his greatest asset to the Tar Heels.

Yes, it helps that he became a precise, detail-oriented note taker at ESPN. And it certainly doesn’t hurt that his employment there gave him a hall pass to probe and explore college football’s most successful locker rooms.

But human interaction… that’s just something you’ve got, or you don’t.

Brown does, in spades.

And it manifests itself most clearly in recruiting, the lifeblood of any collegiate entity. In his six months in Chapel Hill,

Brown has already rocketed UNC’s 2020 class into the top 10 nationally, ahead of traditional powerhouses like Oklahoma and Ohio State.

Which begs the question: What’s it like to get recruited by Mack Brown?

“When you get him into a household, you just sit back. You ain’t have to say a word,” Thigpen says. “If he was selling religion, he’d have his own cult.”

But what’s the exact message? And why does it still ring true coming from a man five years removed from coaching?

“He recruits a little differently,” says Duke Howell, father of UNC quarterback and former Monroe Sun Valley star Sam Howell. One of the most highly sought-after prospects in the class of 2019, Sam Howell was originally committed to Florida State before Brown returned to UNC. Then one of Howell’s favorite assistants left FSU, leading him to reopen his commitment.

Brown, intent on enforcing his strategy of winning the state’s top recruits, pounced — only, not how you’d think.

“‘I’m gonna ask you questions’ — I know it was four questions — ‘and I want you to tell me what school is the better situation,'” Howell remembers Brown telling Sam. “And as he went through it, Sam would answer the question and it would be Carolina.”

Those questions could have been anything: coach stability; coach prestige; proximity to home; academics; playing time; campus lifestyle. The point is, Brown didn’t push. He led Sam to make his own decision based on his own judgments. And sensing Sam’s exhaustion at the end of their talk, Brown even told his assistants to cancel their subsequent at-home visit.

“Mack just made a big impression on (Sam),” Howell says of that meeting. “From that point on, we kind of knew.”

‘We weren’t going anywhere else’

There’s a library trove worth of Mack Brown stories worth sharing — Thigpen’s own recruiting visit, when Brown carried his parents’ luggage to their hotel room, especially stands out — but there’s one that ties everything together better than the rest.

It’s August 2018, and Fedora is still the head coach at North Carolina. Some context: When Fedora was the offensive coordinator at Oklahoma State years ago, he met Brown at a state track meet in Dallas and the two connected. Later, Brown recommended Fedora to Cunningham for the UNC job. Now, Fedora reaches out to Brown and invites the ex-coach to speak to his team.

Brown, who was already in Chapel Hill for his College Football Hall of Fame tour, obliges. Anything for Larry, the kids, that school.

Sally comes with Brown, and a number of his former UNC players show up, too. The night goes well. Really well. For a guy who never thought he’d coach again — especially not at this place — it went almost too well.

“When we walked out that night, Sally says, ‘I understand a little more about why you would want to coach again, because that’s what you do,'” Brown recalls his wife saying. She continued. ” ‘There’s a void in your life — you love the TV, you love your media — but it’s still not what you’ve done your whole life. It’s not the same.’ ”

Brown was missing purpose. Coaching, in all its facets — teaching young people, gathering with longtime friends, challenging himself intellectually — gave him that. At Texas, but especially at North Carolina.

Now he has it again. The void is gone. And this time, knowing what he stands to lose, Mack Brown isn’t letting go.

“Sally made a good point,” Brown says, “and we weren’t going anywhere else but here.”