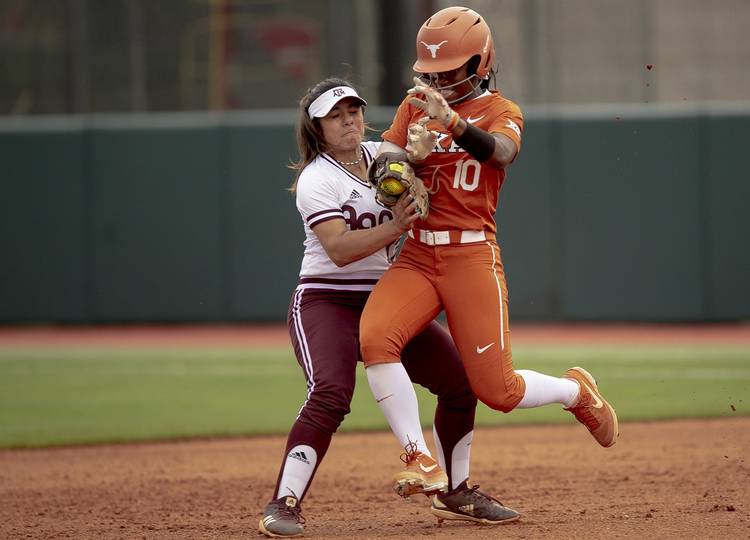 Two years ago, Texas A&M made sure that Texas’ summer vacation started in May.

On Saturday, the Longhorns returned the favor.

Texas fought back from a seventh-inning collapse for an extra-inning victory over the Aggies in an NCAA Tournament game at McCombs Field. The Longhorns’ 3-2 win eliminated Texas A&M from the Austin Regional. In 2017, the Aggies ended UT’s season in a regional they hosted in College Station.

Texas (42-15) led for much of the game as Shannon Rhodes’ two-run homer over the left field fence put UT up 2-1 in the second inning. Rhodes’ swing should have been enough for the Longhorns. However, the team was betrayed on multiple occasions by its defense.

In the first inning, Kelbi Fortenberry drew a full-count walk and then stole second base when UT catcher Mary Iakopo was unable to get off a clean throw. After moving to third on a fielding error by shortstop McKenzie Parker, Fortenberry came home after Iakopo threw away a pickoff attempt.

Six innings later, Texas found itself one out away from a victory. But Rhodes, the Longhorns’ third baseman, committed a throwing error on what should have been the game’s final out. On the play, La Grange native Blake-Ann Fritsch scored from second base and tied the game.

Texas A&M’s momentum swing would be temporary. After a one-out double by UT second baseman Janae Jefferson in the top of the eighth inning, Reagan Hathaway executed a perfect bunt. The beneficiary of too many UT mistakes, Texas A&M threw away the softball while trying to gun down Hathaway, and Jefferson scored the winning run.

Given the lead again, Miranda Elish closed out the Aggies (28-27). Elish surrendered a one-out single, but a highlight-reel play by Jefferson set up the game-ending catch by Parker.

The right-handed Elish allowed six hits over a 146-pitch outing. She struck out 10 Aggies. In the fifth inning, Elish managed to get out of a jam that saw Texas A&M place runners on first and third with no outs.

Around the bases: A  second-inning double by Parker was UT’s school-record 87th of the season. The Longhorns, who bested a standard set in 2012, eventually added two doubles by Jefferson. … Elish recorded her 200th strikeout of the season in the triumph. … Jefferson, Hathaway and Rhodes each had two hits. The Longhorns outhit Texas A&M 9-6. … Houston, which beat Sam Houston State 5-0 and is unbeaten over its two days in Austin, will play the winner of the Texas-Sam Houston State game Sunday.

With its offseason unexpectedly underway, Texas to look for ways to prove that 2019 was ‘a fluke’