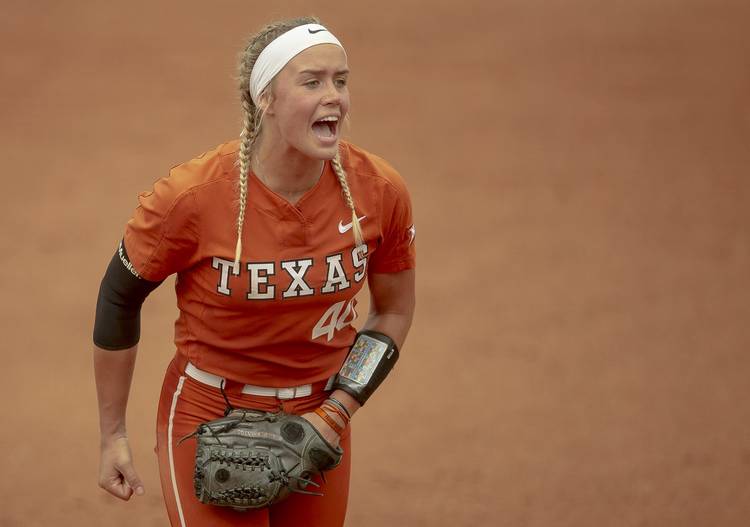 Texas pitcher Miranda Elish (40) celebrates a strikeout against Texas A&M on May 18, 2019 in Austin. [NICK WAGNER/AMERICAN-STATESMAN]

For years, Texas pitcher Miranda Elish has stuck to a pre-inning routine in the circle.

Before her first inning of work, she throws five warmup pitches. Every inning after that, she prepares with three tosses. Since Elish describes herself as “really superstitious,” she won’t adjust that plan.

Not even when she’s thrown more than 200 pitches.

Elish threw 229 pitches — and a few that didn’t count — in UT’s two wins over Texas A&M and Sam Houston State at McCombs Field on Saturday. Then junior’s last 83 pitches were thrown against Sam Houston State in a 3-0 win.

The shutout of the Bearkats kept Texas alive in the NCAA regional it is hosting this weekend. Texas (43-15) must now beat Houston twice on Sunday to advance to the super regionals.

“You just have to push through it if you do feel any (fatigue),” Elish said. “My adrenaline was pumping and I wanted to make our seniors’ season last a few more games.”

With Elish pitching, Texas needed eight innings to record its 3-2 win over the rival Aggies. Elish then worked an overtime shift against a Sam Houston State team that had upset Texas the day before. UT coach Mike White had hoped for his offense to score five runs so he could go to his bullpen, but those runs never came.

Elish, though, didn’t need any relief. Tiffany Thompson’s first-inning bunt single was Sam Houston State’s only hit, and Elish retired 13 straight batters at one point. Aside from its hit, Sam Houston State only reached base on two errors and a hit batter.

“We were making good contact, we just could find the gaps at times,” said Thompson, who was responsible for one of Sam Houston State’s 10 strikeouts.

On Friday, Westlake graduate Lindsey McLeod shut down Texas in the Bearkats’ 2-1 win. Sam Houston State opted to start McLeod against Houston in the winner’s bracket on Saturday afternoon, and she threw 111 pitches in a 5-0 loss that preceded the Longhorn-Aggie showdown.

So for its second go-around with the Longhorns, Sam Houston State turned to Karina Sanchez. Like McLeod, Sanchez was facing her hometown team since she graduated from nearby Del Valle High. A leadoff walk to Lauren Burke hurt Sanchez early on, but the right-hander shut down the UT offense in the four innings after the Longhorns scored on a groundout.

Texas got some insurance against Sanchez when Shannon Rhodes hit a two-run homer in the sixth inning. Rhodes also went deep against Texas A&M, and UT has three homers over its three regional games at the cavernous McCombs Field. Those three homers have driven in five of the team’s seven runs.

In its 11 games ahead of the NCAA tournament, Texas did not homer at the four fields it played at.

“I think its cool to see us finally start hitting balls over the fence, but also we’re finally starting to get some bunts down too,” Rhodes said.

Texas only got a 35-minute break between its games on Saturday, but the same line-up was used in both contests. In fact, outfielder Tuesday DerMargosian’s one-inning defensive shift against Texas A&M was the only contribution off the bench. The Longhorns will need to survive another long day on Sunday in order to keep its season alive.

“It’s who wants to fight the hardest, who wants it the most,” Rhodes said. “Your adrenaline really takes over. Having you teammate to your right and your left and knowing that they’re there for you really just pushes you through it.”

Interjected White: “I also think the alternative is six months of rest.”

Around the bases:  Sanchez, who was tutored in high school by ex-Texas star Blaire Luna, allowed five hits over six innings. … Elish struck out 20 total batters on Saturday. … Sam Houston State finished its season with a 35-23 record. … Texas and Houston will meet at 3:30 p.m. on Sunday. UT beat Houston 5-0 on April 10.