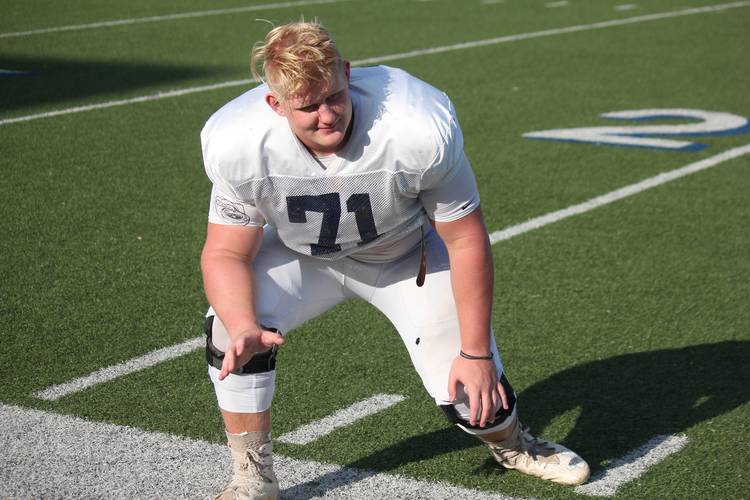 Texas offensive line signee Logan Parr expects to redshirt his freshman season; he played tackle in high school but will move to the interior as a Longhorn. (Mike Craven/American-Statesman)

SAN ANTONIO — Texas offensive line commitment Logan Parr grew up wanting to be a great football player. The four-star guard picked up his first FBS offer in the ninth grade when Toledo visited San Antonio O’Connor to watch spring football practice. More offers followed, including one from Texas in September of his junior season. He pledged to the Longhorns last October, becoming the second member of Texas’ 2020 class after Lake Travis quarterback Hudson Card.

“I wouldn’t have believed it if I was told I was in this position back in middle school,” Parr said. “It was always my goal, but it’s still an amazing feeling and a blessing. A lot of work went into getting here.”

Parr is a 6-3, 280-pound prospect who can play tackle in high school but is expected to move inside to guard or center at Texas. He’s ranked No. 14 on the 2020 Fabulous 55, and the sixth-ranked guard prospect in the nation, per 247Sports’ composite ratings. He picked Texas over 22 other offers and was a standout at The Opening regional earlier this spring. The three-year starter attributes his rise to technique.

“My technique took off and that helped me open up my game. My freshman film is much different than last year,” he said with a smile. “The game becomes easier once your instincts kick in.”

O’Connor head coach James Malesky noticed Parr in the eighth grade. He immediately knew Parr would be a contributor on varsity after a year spent on the freshman team. Parr’s size helped, but it was his personality and presence that Malesky grew fond of before Parr ever arrived on campus.

“We knew about his talent, but it was also about his work ethic. He came up to almost every spring football practice as an eighth grader,” Malesky recalled. “He was in our weight program that summer, and he’s always shown a willingness to improve and put in the work.”

O’Connor is no stranger to offensive line talent. Brannon Brown was a member of the 2019 Fabulous 55 who signed with TCU. Brown and Parr grew close in high school with Parr able to take notes and learn from Brown’s experience as a recruit. It’s one of the reasons Parr was comfortable enough to commit to a school before the end of his junior season.

“Watching Brannon made a huge impact,” Matesky said. “He lived it and was being recruited. His parents could also convey things over to Logan and Logan’s parents. That helped Logan and his parents get a head start on the recruiting process.”

The added pressures on modern day recruits is another reason Malesky thinks Parr chose to commit early and concentrate on his senior season.

“It’s so hard on these young kids now, especially the high-level kids,” he said. “There is so much pressure thrown on them by their friends and on social media. There are expectations placed on teenagers who have yet to play a down of college football. They’re asked to travel all over the country and take these visits. I think Logan was ready to shut it down and put it in his rear-view mirror.”

Malesky is proud of what Parr has accomplished at O’Connor. He’s prouder of what Parr remained as a person through the recruiting process. He thinks that same maturity and work ethic should carry Parr through the difficult adjustments all players face early in their college careers.

“If I was to have a son, I’d want him to be like Logan. He’s a mature kid, so I think he’ll make the adjustment,” Malesky said. “Going from 6A football to major college football is a big jump and that takes everyone time. He’s got a work ethic and desire to be the best he can possibly be, and that’s going to take him far in life and on the football field at Texas.”