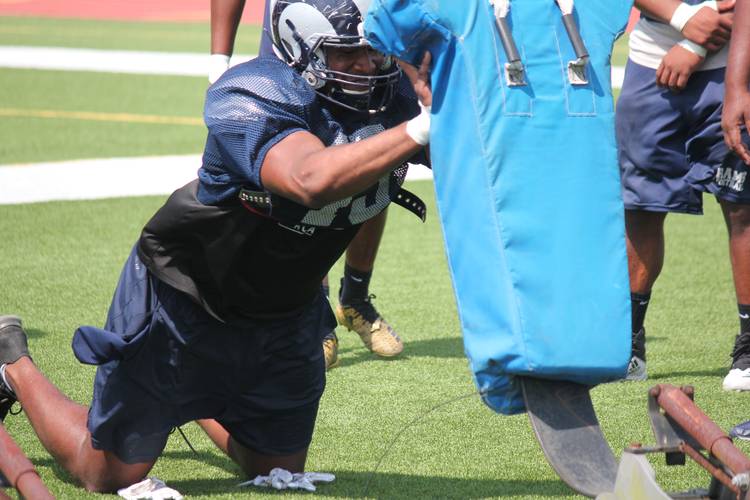 CYPRESS — Football remains new to four-star defensive lineman Vernon Broughton. The Houston Cypress Ranch product began seriously playing football at Spring Woods as a sophomore. An offer from Baylor in the spring of his junior season solidified his commitment to football over his childhood love of basketball.

“I knew college coaches liked me in football once I got my first offer,” Broughton said. “I love getting after the football. I’m learning each time I go out there on a football field.”

Broughton isn’t hard to find. The 6-5, 286-pound prospect is ranked No. 6 on the 2020 Fabulous 55 and is the fifth-ranked defensive tackle in the country, per 247Sports’ composite ratings. He was a first-team all-district selection as a junior.

He now holds 25 offers. He narrowed his list to six schools on Monday. Texas was included. Texas and Ohio State are battling it out with LSU, Alabama, Arkansas and Texas A&M.

“Those (six schools) see something in me. They’ve shown they care about me and my family. They’re all really inviting,” Broughton said. “If you don’t like my family, I’m not going to like you.”

Texas is clearly high on Broughton’s list. His Twitter profile picture is an illustration of him in a Texas uniform. The Longhorns are the only program to have earned an official visit from Broughton, though he’s planning a trip to Ohio State. He wants to pick a school by the end of the summer.

“There’s a lot to like about Texas,” he said. “They have a love and a passion for me and my family. Coach (Oscar) Giles sees me playing multiple positions, and that’s what you need to get into the league as a defensive lineman. You can’t just play one position anymore.”

Cy Ranch is under new leadership with Andrew Shanle at head coach. The coaching change forced Broughton to learn a new defensive scheme, which he and Shanle think is important for Broughton since he’s still new to football. Shanle took over in February and quickly took to his four-star end.

“He’s all smiles. He enjoys the game. He’s done a great job of listening and taking coaching,” Shanle said. “He’s also helping his teammates to jump on board with our message. Vernon is a happy-go-lucky guy, but when he dials it end, he’s a pretty good football player. He’s been a joy to work with.”

Shanle gets to watch Broughton blossom first-hand in spring practices. He knows the potential is unlimited for his big-bodied defensive weapon.

“He’s raw in his abilities. I don’t think he knows how good he is yet,” Shanle said. “He can be a truly dominant football player if he cleans up his technique.”

Count Shanle in the camp who doesn’t pay much attention to a potential position for Broughton. The coach knows that his prodigee’s body will dictate the future, as will the versatility of defensive schemes in modern football. No one plays exclusively in one scheme. It’s still gap-based football whether a player lines up at 4i or as a five-technique.

“Every defensive lineman is going to play multiple positions along the defensive line. Coaches are going to line you up in multiple ways and it’ll all balance it out in the end,” Shanle explained.

The recruiting process is increasingly stressful with more publicity and social media pressure in each class. Transfers are becoming an epidemic. Shanle’s solution is for prospects to become proactive on the recruiting trail.

“Kids need to be advocates for themselves in the recruiting process,” he said. “They need to have questions ready for those coaches. You want to go to the best fit that way you enjoy your time in the good times and bad. High school coaches can help ease the process by discussing those things with parents and the players. Recruiting is stressful. It’s a marathon, not a sprint. The more questions you get answered, the better the fit.”

Give her the ball: A refreshed Elish can expect more work in super regionals against Alabama