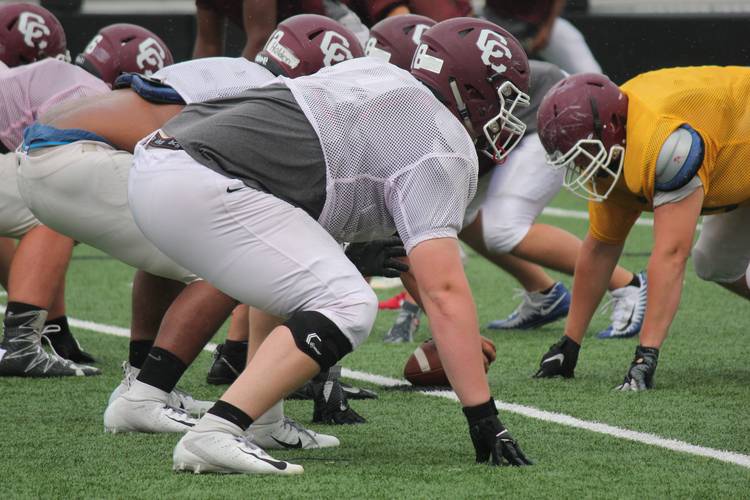 LEAGUE CITY — LSU head coach Ed Orgeron pulled into the parking lot of Clear Creek High School and began circling the parking lot in search of the football facility. Instead of finding four-star offensive tackle prospect Chad Lindberg, Orgeron was questioned by a security guard who inquired about his reasons for his visit.

It’s the new normal at Clear Creek; the high school became a revolving door to the top coaches in the nation this spring.

“When I took this job last year, coach Darrell Warden (the previous head coach) told me that the first time he saw how easily Chad could bend in the weight room doing squats that he’d be the most recruited kid in our school district’s history,” said Clear Creek head coach Dwayne Lane. “I became a believer quickly.”

Lindberg is the top-rated prospect in Texas at the second most coveted position in football after quarterback. He’s ranked No. 6 on the Fabulous 55 and the ninth-ranked tackle in the country, per 247Sports’ composite ratings. The 6-6, 327-pound prospect holds 37 offers.

“I started playing football in the fifth grade. I didn’t realize my potential until my sophomore year when college coaches starting showing me interest, but I’ve enjoyed it since I started playing,” Lindberg said. “I like the physicality and the strategy of the sport.”

Lane put every member of his football program, regardless of position, through four drills when he arrived in the spring of 2018. Two of the drills were specifically designed for wide receivers and defensive backs. The new head coach simply wanted to watch how well his players moved and competed outside of their comfort zone. Lane walked away in awe of his star lineman.

“Chad went through those stations and looked more natural flipping his hips and locating the ball than some of our defensive backs,” Lane explained. “Watching him move like that was unbelievable. I knew the hype was real.”

The attention from the top programs in the country is still surreal to Lindberg. He’s a smart, measured kid who can play anywhere from Stanford to Texas to Alabama because of his excellence on the field and in the classroom. Lindberg ranks in the top 25 of his graduation classes, and he contends that education is a major factor in his recruitment.

“Overall quality of education is important to me. I want a degree with weight to it,” he said. “Also, the relationship with coaches and the other commits (is important). Playing time is also a factor.”

Texas is hoping to check those recruiting boxes for its top target at offensive tackle. Lindberg took an official visit earlier in May. He’s grown close to future Longhorns in his recruiting class like Jake Majors and Logan Parr. Offensive line coach Herb Hand is a frequent visitor to campus and was watching Lindberg on Tuesday afternoon alongside a coach from Stanford.

“I like the personality and humbleness of the current offensive line commits at Texas,” Lindberg said. “We’ve clicked as people. They’re great players on tape.”

It’s not just the size and flexibility that makes Lindberg a rare offensive line prospect. Or the intelligence and work ethic. It’s the switch Lindberg turns on when it’s time to play. He’s endearingly referred to as the meanest nice kid in the state.

“The thing that sets him apart for the elite colleges is his mean streak. He’s the nicest kid in the world until he goes to work,” Lane said. “There are other kids that are big and long, but he’s a different type of competitive.”

Lindberg hopes to use the summer to narrow down his schools and take visits. He wants to pick a school by the start of the season. Texas is in a fight with programs like Stanford and Georgia. Lindberg’s coach is proud of his prospect’s maturity and humbleness displayed throughout a hectic, and sometimes stressful, process. Lindberg went as far as setting up a rotation of calls to college coaches in order to provide adequate time to each school recruiting him, including the smaller programs likely without a chance.

“Any coach will tell you that the most successful teams are the years when our best players are the hardest workers,” Lane said. “That’s how you become a leader. You don’t get those types of those guys very often. Chad checks those boxes because he’s a leader on campus because of how he handles himself as a true student-athlete.”

Give her the ball: A refreshed Elish can expect more work in super regionals against Alabama