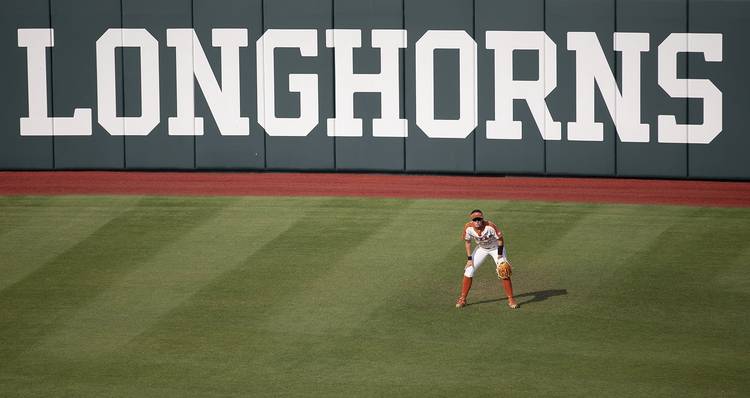 When the Longhorns arrive at Rhoads Stadium in Tuscaloosa on Thursday for the first game of the Alabama super regional, they’ll head to the visitor’s dugout.

Twenty-one of the 22 players on Texas’ roster won’t think twice about the home-away designation. Then there’s the case of MK Tedder.

Tedder, Texas’ sophomore outfielder, has been watching the Crimson Tide play for years. Growing up in Hoover, Ala., her oldest memory of Rhoads Stadium includes six-year-old friends, funnel cakes and lemonade. Former Alabama standouts Kelley Montalvo and Kayla Braud were the players that she looked up to. As a child, Tedder attended every Alabama softball camp.

“I grew up wearing crimson,” Tedder said this week, “so it’s going to be different. But I’m very excited.”

Tedder easily could have been playing for the home team in this best-of-three super regional. She was recruited by Alabama — a finalist for that state’s Gatorade player of the year award in 2017, she produced 214 RBIs and scored 221 runs in her high school career at Hoover Spain Park. But she saw her friends all committing to SEC schools. The only way she could grow as a person and a player, she felt, was to leave home.

So she signed with Texas. It was a decision supported by her members of her family, some of whom will be wearing burnt orange this week.

Texas (45-15), the ninth seed in the NCAAs, advanced past the regional round for the first time since 2013 thanks to the pitching efforts of Miranda Elish, who threw 429 pitches over four straight Longhorns wins through the loser’s bracket last Saturday and Sunday. Texas’ 1.60 team ERA ranks seventh nationally and the Longhorns have posted 22 shutouts, which trail only Oklahoma and Florida.

The Crimson Tide are “very reminiscent” of Oklahoma, the country’s top-ranked team, UT coach Mike White said. “I think they’re underrated. I think they should be in the top five, without a doubt.”

Tedder is hitting .224 with 14 runs scored during a season in which she has redefined herself. Raised as a middle infielder, she became a third baseman for the first time during the 2018 season. White, however, didn’t see her as a corner infielder after he replaced Connie Clark this offseason.

Tedder moved to the outfield, but struggled to find playing time. After starting 59 games as a freshman, she had only six starts in Texas’ first 47 games this season.

Sitting on the bench forced her to work more on fundamentals and the mental aspect of her game. Coaches soon took note of her speed and arm strength.  Tedder started in right field for the finale of the Oklahoma series and has kept that starting job for all but one of the 12 games since. Batting toward the bottom of the lineup, she collected a hit in three of the five regional games.

“Not playing motivated me more to work hard,” she said. “I also learned how to be a team player during that role because I had never really been in that role before. I learned a lot about myself and how to be a good teammate through that.”

Oh you think you can dance? 😈 We challenge @uclasoftball to the #switchitupchallenge

Tedder sports two tattoos on her wrists, one of a thunderbolt that celebrates her Alabama travel team and one that honors Alex Wilcox, a childhood friend and Mississippi State outfielder who passed away last summer from ovarian cancer. Tedder just adopted a cat she named Gus. In high school, she made a state all-tournament team in bowling. She wears No. 22 because that’s what her father, Scott, wore when he was in the minor leagues. White likes Tedder’s dry wit and UT fans have likely seen her dancing on the field and on the team’s social media accounts.

Tedder also enjoys rapping. That dates back to an eighth-grade history project, and Elish vouches for her future roommate’s skills. Tedder writes her own songs and has composed lyrics about a few of her teammates.

And if Texas goes on to win an NCAA title? Tedder may have something to say.

“It’s already in my (phone) notes,” Tedder said. “I don’t want to let it out too early. It has a release date, so we’ll see how that goes.”