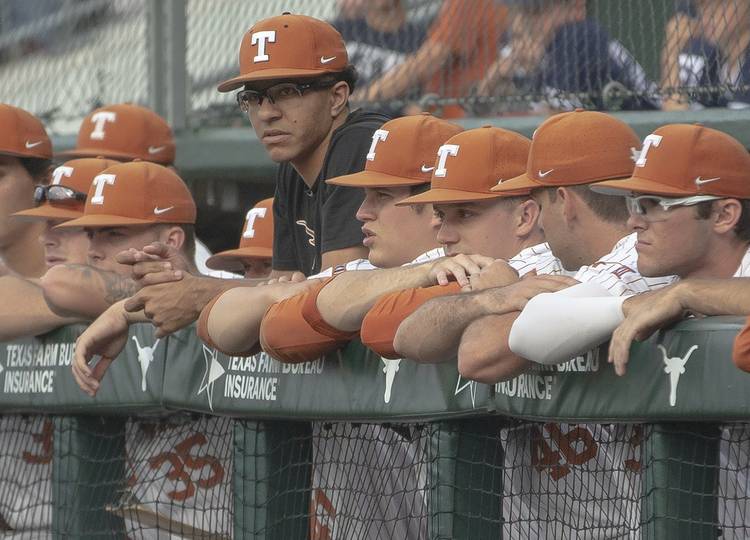 Texas infielder David Hamilton watches a teammate bat during an NCAA college baseball game against Incarnate Word on May 14, 2019 in Austin. [NICK WAGNER/AMERICAN-STATESMAN]

In November 2015, the San Marcos High School football team won a playoff game for the first time in nine seasons.

The Rattlers’ quarterback — David Hamilton — missed the school’s historic win over San Antonio Harlandale because of a broken collarbone. “It sucked,” he told the American-Statesman that following spring. “I just wanted to be out there playing.”

Still, Hamilton totaled 19 touchdowns his senior season, so some solace could be found in his contribution’s to the team’s overall success.

Nearly three-and-a-half years later, a similar silver lining was hard to find for Hamilton, ” now a junior shortstop at Texas who missed the entire 2019 baseball season with an Achilles injury.

“Sitting out a whole season is different,” he told the Statesman last week, right before the season-ending series loss to Oklahoma.

Hamilton was joined for much of the spring by senior catcher DJ Petrinsky, who was lost with an injured shoulder. Together they watched from the dugout as the Longhorns slogged through a disappointing season that saw them miss the NCAA postseason and this week’s Big 12 tournament.

Both Hamilton and Petrinsky were poised to have big years. Already a defensive marvel at shortstop, Hamilton had added power as a sophomore (five home runs in 2018) while also recording the most steals (31) for a Longhorn since Drew Stubbs in 2005. Petrinsky, a transfer from Hill College, hit nine homers and threw out 26 attempted base-stealers last year.

Hamilton was injured in a preseason scooter accident. Petrinsky said his shoulder hurt for much of the 2018 season and hypothesized that a heavy workload in junior college may have been the beginning of his problems; Texas hoped he would eventually feel better this spring and he started 10 games as ether a designated hitter or first baseman. He was shut down with a labrum tear on March 6.

“I tried to rehab and come back without surgery; it just didn’t work out,” Petrinsky said.

After his surgery, Petrinsky traded in his glove for a sling. Hamilton opened the season with a boot and crutches, which caused sophomore designated hitter Zach Zubia — he of one career steal — to boast that he was now faster than his teammate. Hamilton deadpanned back: “I told him I’d probably still beat him in a race, hopping on one leg.”

Hamilton and Petrinsky’s injuries weren’t the only reasons why Texas went 27-27 and missed the Big 12 tournament. But their absences couldn’t be ignored.

Before the season, senior Masen Hibbeler told reporters that, “Nobody can ever be David Hamilton.” Indeed, both Hibbeler and freshman Bryce Reagan struggled to replicate what Hamilton contributed defensively. And without Petrinsky, a worn-down Michael McCann was asked to catch in almost every game this season. Offensively, Texas lacked power and hit just .250 as a team, the Longhorns’ lowest average since the 1968 season.

“It’s tough. You can’t go out there and help your team out,” Petrinsky said. “Hanging out in the dugout, I guess, is what it is.”

Hamilton and Petrinsky both were asked if they expect to be back at Texas for the 2020 season, and both said yes. Pentrinsky appeared in 11 games, so Texas will need to apply for a medical redshirt for him. The major league baseball amateur draft begins June 3. Hamilton, who was drafted out of high school, is eligible again. “Hopefully they don’t offer him too much that he doesn’t have any decisions to make,” UT coach David Pierce said at the end of the season.

The Achilles injury gave Hamilton a good excuse to focus on his upper-body strength and rest his arm. He has worked on underwater and low-gravity treadmills and jogging will be his next step. Hamilton believes he will be “just as fast, if not faster” upon his return.

Petrinsky says he’s looking forward to batting again. That won’t happen anytime soon, though. He has resumed stretching but is at least three months away from his throwing program. He expects to be fully healthy by next February.

“I always knew that labrum surgery was worse than Tommy John,” Petrinsky said. “Going into it, I thought I was pretty much done, that my baseball career was over. I kind of did a little more research and I ended up getting to go to the right surgeon through Texas. That boosted by confidence quite a bit. Now it seems it’s just up to me to come back healthy.”