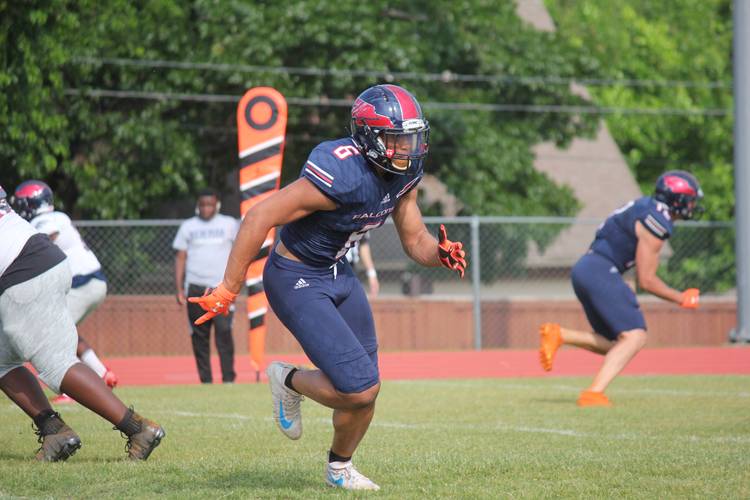 DALLAS — Bishop Dunne running back Jaden Hullaby was a sophomore when Florida became his first FBS offer to play football. It came as a surprise to the 6-2, 205-pound three-star prospect from south Dallas. Baylor, Indiana, and Iowa offers soon followed. It was the realization of a life-long dream for the Texas commit.

“I didn’t believe it when coach told me I was offered. It took me a few days to post the offer,” Hullaby said on Wednesday following Dallas Bishop Dunne’s spring game. “Playing football beyond high school was always the goal, but I didn’t think I could get this far. I knew I was a good player growing up, but it was big for it to actually happen.”

“He can clearly play running back, but he can also get out of the backfield and catch the football,” Bishop Dunne head coach Michael Johnson said. “His toughness and leadership also stand out because he knows how to work. He’s super athletic and smart. He’s a tough-minded kid who can do a lot of things on the football field”

That versatility earned him a UT offer on March 11. He committed on March 30, becoming Texas’ fifth member of the 2020 recruiting class. He’s the last prospect to commit to the Longhorns with Tom Herman’s program nearly two months removed from a pledge. Hullaby was sold on Texas’ plan to deploy his ability to play multiple positions.

“Texas sold him the vision of where they want to be and how he fits into their vision,” Johnson said. “It was important to him to find a place that would use him in a variety of ways on offense.”

Hullaby also knows that the key to a potentially long football career is the ability to fill multiple roles.

“Versatility is important with the way the NFL is transitioning to liking players who are hybrid athletes,” he said.

It also helps to play against elite competition on a daily basis. Bishop Dunne cranks out FBS prospects every year. Texas is also in contention for 2020 linebacker Brennon Scott, a four-star prospect and a member of the Fabulous 55. Iron sharpens iron, and all that. Life won’t get easier in college.

“Bishop Dunne pushes you because there are future college athletes at each position across from you, and that makes us all better to compete against that each day,” Hullaby said. “That’s what it’ll be like at the next level.”

“We’ve built something here that is unique. It is kind of a college reunion when we have a spring game,” Johnson said. “The older guys come out and support the younger guys. We’re a family, and that means supporting the next group up.”