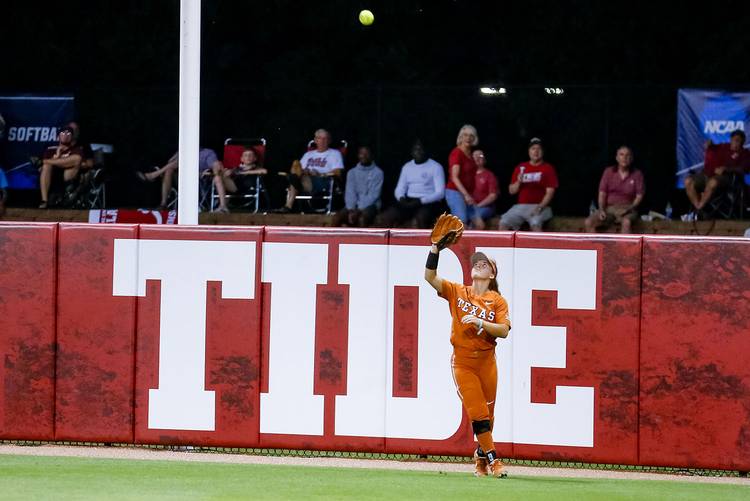 On one hand, White’s “Game of Thrones” reference was fitting since Texas will again have to rally from the brink. On the other hand, that HBO show ended its eight-season run on Sunday night, and Thursday’s loss once again has pushed the Longhorns to one loss away from the end of their season, too.

Texas (45-16) now must beat Alabama (56-7) twice over the next two days to advance to the Women’s College World Series.

“We just have to minimize the mistakes and play our best softball,” pitcher Miranda Elish said. “Alabama’s a really good team and you can’t afford mistakes against them.”

The biggest of Thursday’s seven hits came from the bottom of Alabama’s batting order. Crimson Tide coach Patrick Murphy says he likes “to leave a surprise in the nine spot” and that surprise against the Longhorns was senior Merris Schroder. With one out and a runner on third base in the third inning, Schroder hammered a pitch from Elish over the fence in right field at Rhoads Stadium.

Schroder entered the game with 11 homers, third-most on the team. She hadn’t batted ninth this season before the regional-clinching win over Arizona State, but both times she’s homered out of the spot in the lineup.

“By the time it gets around to me at the bottom, I’ve seen a lot of at-bats,” said Schroder, a Houston native who said her father was once a drum major at Texas. “I kind of got a better idea of what they’re going to throw me and what she’s looking like and stuff like that.”

The homer was the 10th surrendered by Elish this season. But she hadn’t seen one of her pitches leave a park since Oklahoma’s Jocelyn Alo went deep on her in the fifth inning of a game at McCombs Field on April 20. Elish’s stretch of not giving up a home run covered 62 1/3 innings and 923 pitches.

“She capitalized on one of my mistakes,” Elish said. “I threw a pitch right down the middle and she drove it. I can’t do that when I have a batter with two strikes.”

An all-conference honoree and All-American candidate, Elish was bested by Alabama freshman Montana Fouts. An acquaintance of Elish from travel ball, Fouts allowed three hits and did not issue a walk. Texas, which never got a runner to third base, suffered its fourth shutout loss of the season.

“I felt like she was bringing it a little bit,” UT sophomore Janae Jefferson said. “It wasn’t too overpowering for us. We just have to attack the ball early in the counts and be more of an aggressive-hitting team.”

In defeat, Elish gave up three hits and two earned runs over four innings. She recorded just one strikeout.

Elish was coming off a weekend in which she earned four regional wins with a 429-pitch effort in the span of two days. White said Elish was working with a short leash, but she will likely return to the circle in Friday’s elimination game.

“Sometimes you’ve got to save the bullets,” said White, who had senior Brooke Bolinger throw two innings of scoreless relief.

Around the bases: Texas committed two errors. Alabama scored its third run on UT catcher Mary Iakopo’s throwing error on a successful fourth-inning double steal. … Jefferson’s bunt single in the fourth frame was her 75th hit of the season. That ranks second in UT’s history books, breaking a tie with the 74 hits that she totaled as a freshman. … Thursday’s game drew an announced crowd of 2,887. … Texas and Alabama will meet again at 8 p.m. on Friday. It’ll be carried by ESPN and 105.3.