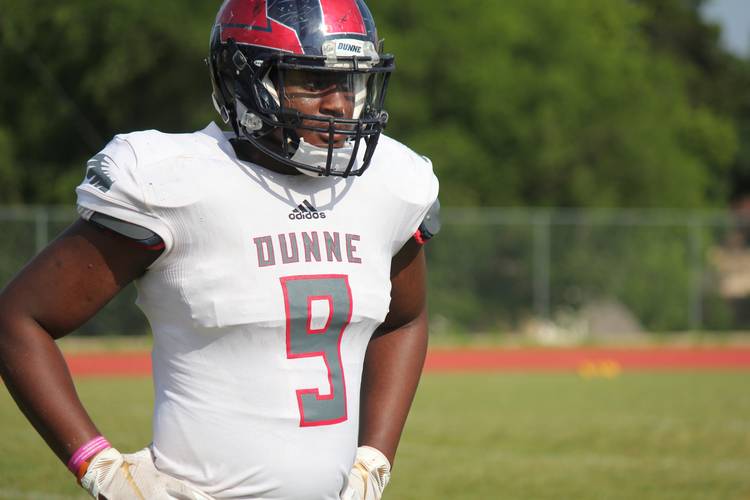 DALLAS — The practice field at Bishop Dunne was littered with current and future college football stars last Wednesday when the defending TAPPS state champions hosted their annual spring game. It’s a reunion of sorts, as the seniors preparing for college, and other alumni in the area, come out to support the next group of stars.

Four-star linebacker Brennon Scott is among those stars experiencing the recruiting process. The 6-1, 230-pound prospect holds 33 offers, including one from Texas. The versatile second-level defender recorded 88 tackles, 14 sacks and two forced fumbles as a junior. His ability to rush the passer has schools from across the country lined up to recruit Scott, who can play inside linebacker, outside linebacker or defensive end, depending on the scheme.

“I’m being recruited to play linebacker and get after the passer,” Scott said. “The older guys always tell me not to make a decision based off the coach. I want to pick a school more than a coach.”

Plenty of college coaches were in attendance for the spring game, including Texas defensive coordinator Todd Orlando.

Scott was hampered with a hamstring injury throughout spring practice and for much of the offseason. He’s ranked No. 45 on the 2020 Fabulous 55 and the 25th-ranked outside linebacker in the country. The concern with Scott is his overall speed. Bishop Dunne head coach Michael Johnson thinks the injury played a role in his speed testing scores at events like The Opening regional earlier in the year.

“He gutted it out, and that shows maturity and toughness,” Johnson said about his star defender. “He’s super athletic, so he can do what he wants to do at the next level. He’s a playmaker who can play a variety of roles. Coaches are always searching for linebackers who can move and get after the quarterback.”

Scott plans to pick a school by the end of summer and then sign in December. He credits the players and coaches at Bishop Dunne for putting him in his current position as a coveted recruit among the nation’s best schools.

“We have great coaches here at Bishop Dunne. They put us in a great position to get to the next level. It’s a special place to play. They do their very best to get you seen by the college coaches,” Scott said. “It’s fun to go against the best. It’s great to push each other. Our practices are harder than most games.”

Texas holds a commitment from his teammate, Jaden Hullaby, who plays running back. Hullaby is a three-star athlete expected to play a little of everything on Texas’ offense. He referred to himself as a Swiss-army knife weapon because of his ability as a runner and receiver. The Longhorns want a bigger presence in the Dallas-Fort Worth area since it is a hotbed of recruiting talent in every cycle.

The key to landing Scott goes beyond the football field.

“It’s about the feel of the school and how well they can set me up for after football with a degree,” he said. “Football eventually ends for everybody.”