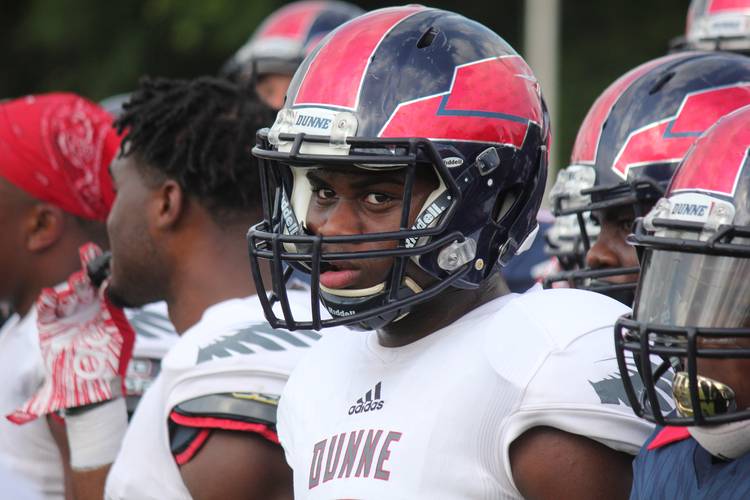 DALLAS — The Longhorns hope a budding pipeline at Bishop Dunne Catholic School in south Dallas remains fruitful for years. It’s no secret that DFW remains a chore for Texas on the recruiting trail compared to its success in Houston and even out of state. The 2019 class consisted of two commits from the Dallas-Fort Worth area. Same for the 2018 class.

It’s not necessary for Tom Herman and company to reign supreme in DFW like they have in Houston over the past two cycles. The Longhorns do need to win a handful of battles there in each class, however. Recruiting is about relationships, and it is clear that the Texas staff is starting to forge stronger ones in DFW with two of its five commitments in the 2020 class hailing from that area.

One of those commits is Bishop Dunne athlete Jaden Hullaby, a three-star running back expected to fill a variety of roles on offense for the Longhorns. The 6-2, 205-pound prospect is the 42nd-ranked athlete in the country. He pledged to Texas on March 31. Hullaby rushed for 1,181 yards and 11 touchdowns, adding 33 receptions out of the backfield. That versatility makes him a potential weapon at running back, H-back and tight end.

Texas is also in the mix for four-star outside linebacker Brennon Scott. Defensive coordinator Todd Orlando was at Bishop Dunne for the spring game last Wednesday. It’s possible the Longhorns sign as many players from Bishop Dunne in 2020 as it did in all of DFW last year. That’s a positive sign forward, especially considering the Longhorns are in good position for DFW targets like Highland Park pass rusher Prince Dorbah and Arlington cornerback Jahari Rogers.

Recruiting moves faster each cycle. The early signing period and the fact that juniors can take official visits in the spring equate to earlier decisions. Half of the 2020 Fabulous 55 is already committed. Most of the uncommitted players on the list want to pick a school by the start of senior season. That puts a bigger emphasis on building early relationships. Texas hopes the relationships built in the 2020 class pay off in 2022 when Jaden’s younger brother, Landon, is ready to sign.

Landon is an early contender for best safety in the 2022 class. He already holds 15 offers as he readies for life as a full-time varsity starter. The 6-0, 180-pound sophomore-to-be is watching and learning from his older brother.

“He can show me the way. I know he’ll give me good advice,” Landon said of his big brother. “He says don’t commit to the coaches. It’s about committing to a school and a program because coaches can leave.”

Landon could become a star at multiple positions. For now, his future appears to be at safety or nickel back. He’d likely be a four-star cornerback if he was to go that route. That versatility is as important to Landon on defense as it is for Jaden on offense.

“It’s important to be versatile as a defensive back because coaches want to use you all over the field without changing personnel. A defensive back needs to be good at playing against the run and the pass,” Landon said. “We’re the last line of defense.”

Landon is adjusting from young pup to expected star. That transition is eased by the talent level he faces on a daily basis at Bishop Dunne, the defending TAPPS champions.

“It feels good to compete against the guys everyday because it makes me better. I’m surrounded by future college football players. That has to help my development,” he said. “It’s nice being part of a legacy, but I’m ready to make my own name.”

As for Jaden, don’t expect big brother to force his younger sibling to follow him to Austin.

“My advice to him is to do your own thing. Don’t choose because of me,” Jaden said. “Pick a school that has a role and a plan for you.”