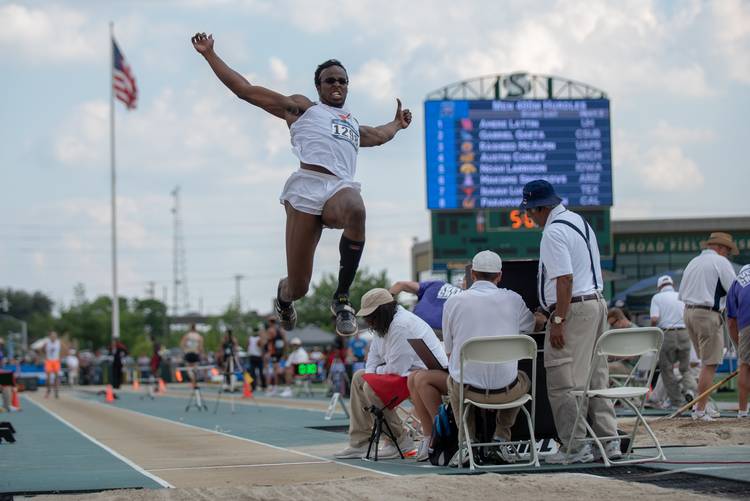 At the NCAA Outdoor Track and Field Championships, Texas junior Steffin McCarter will be among the favorites in the men's long jump. [Photo courtesy of Texas Athletics]

Ask Steffin McCarter where he’s from and the Texas long jumper will tell you about Copperas Cove. His high school? That would be nearby Lampasas High.

Now, in track and field circles — a circle that the junior has run in since he was seven years old — that means McCarter attended Lam Jones’ high school and grew up in Robert Griffin III’s hometown. Jones, of course, was the Olympic gold medalist who also starred on Texas’ football team. And before he was an NFL quarterback, Griffin was one of the nation’s top hurdlers.

McCarter has ties to both Griffin and Jones. Griffin will often comment on McCarter’s social media posts, and Griffin’s father was McCarter’s long-time club coach. And McCarter formed a relationship with Jones, who died in March, after he broke Jones’ 39-year-old school record at Lampasas during his senior year.

McCarter is aiming to win an NCAA title this week, and such an accomplishment may give him bragging rights over Griffin. He knows, though, that he’ll never be Lampasas’ best Badger.  That’s one silver medal he is willing to accept.

Starting Wednesday, Texas will host the NCAA outdoor championships, the first of a two-year stint as host before it moves back to Oregon in 2021. There are 177 schools represented at this year’s NCAAs and 1,215 athletes. Twenty of those are Longhorns.

The men’s long jump is one of six finals being staged on Wednesday. Of the 24 entrants, McCarter boasts the second-best qualifying mark. He jumped 7.91 meters at the NCAA’s West Preliminary meet last month. But a trip to the podium won’t be easy to secure.

LSU’s JuVaughn Harrison is the top seed (7.97 meters). Another LSU standout, Rayvon Grey, is three months removed from a gold-winning leap at the NCAA indoors. Akron’s Jordan Latimer and Florida’s Grant Holloway were the runners-up at the NCAA’s last two outdoors. Three Texas Tech athletes are in the field, and Red Raiders senior Charles Brown once bested McCarter in the long jump at a high school meet at Myers Stadium.

“I’m still a little salty that he beat me,” McCarter said.

McCarter won a bronze medal in the long jump at the 2017 NCAA indoors. This may be the best stretch of his career, though. He took home the  Big 12 title with a leap of 7.93 meters and he jumped 7.82 meters at a meet in College Station in April.

McCarter credits his improved consistency to the arrival of UT head coach Edrick Floréal, who has worked with Longhorns jumpers since taking over the track and field program a year ago.

Both the coach and athlete recalled having a “Come to Jesus” meeting after Floréal’s hire. A new work ethic was developed. Different standards were established. McCarter has been graded every day on everything from his attitude to his technique.

“I think he has the potential to be an Olympian,” said Floréal, himself a former Olympic long jumper and triple jumper for Canada. “It’s going to depend on being consistent. I think with his height, size and speed, he’s almost the perfect prototype to be a great long jumper.”

For McCarter, staying healthy has also helped. Two torn hamstrings and a surgery to remove a tumor from his right hip sidelined McCarter for much of the 2017 and 2018 outdoor seasons. Floréal said that McCarter’s injuries weren’t catastrophic and instead stemmed from the poor maintenance of his body. “It’s just like having a cavity,” Floréal reasoned. “If you take care of your teeth properly, the less likely chance you’re going to get them.”

Floréal’s use of the word “cavity” is ironic. McCarter gave up candy this season, which was a big sacrifice for a Swedish Fish connoisseur who once had 12 cavities. Texas coaches also forbade the 6-5, 200-pound McCarter from doing the upper-body lifts that he had become obsessed with over the summer.

Those changes, though, have been good. Who needs candy when success is just as sweet?

“My confidence, honestly right now, is at an all-time high,” McCarter said. “It comes down to who’s the most consistent and who can perform and I’ve proven over the last two meets, that’s me. … I feel like as far I’m concerned, I’m one of the best two jumpers in the nation.”

In its history, Texas has won seven national titles in the long jump. Marquise Goodwin’s 2010 and 2012 championships, however, are UT’s only wins in the event in the last 20 years.

Texas will have 20 athletes competing in this week’s NCAA outdoor championships.

The Dotted Line: A closer look at the nine new prospects on the 2020 Fabulous 55