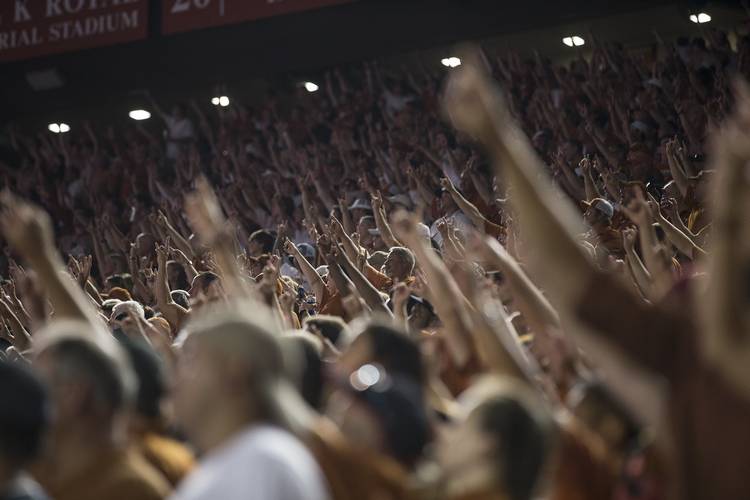 On Tuesday, one Texas official said football season ticket sales are likely to pass 60,000, nearing the all-time high of about 62,500 for the 2010 season. The school is at a 97% renewal rate and added 6,000 more new season ticket sales.

New season ticket sales begin Thursday to the general public, but there may not be many glamorous seats left.

“It could’ve happened this morning, for all I know while we’re on the phone,” said Drew Martin, UT’s director of external affairs who oversees ticketing. “Our initial goal was 60,000. Then we saw how well we were doing and moved the goal to 63,000.”

At that point, Texas athletic director Chris Del Conte moved the goal post back again — raising the department’s goal to 65,000 season tickets. At least this is easier than getting into “Hamilton.”

“It’s always a moving target,” Martin said. “We definitely want to continue to sell as many as we can.”

Texas officials still haven’t figured out all of the moving parts associated with game day quite yet. The season opener is Aug. 31 against Louisiana Tech.

With a construction barrier now walling off the back of the south end zone, where will Bevo XV stand? “We’re working very hard to keep him in his spot in the southwest corner,” Martin said.

Will Smokey the Cannon still be in the southeast corner? Yes, the school will still have the cannon on the field, multiple school officials said. The Texas Cowboys, the spirit group known for firing the cannon, has until Friday to respond to a university decision calling for a six-year ban after a hazing incident at an off-campus retreat in September.

If the tunnel has been demolished, how will the Longhorns run onto the field? What about the spirit squads? Where will they stand and wave the oversized UT flag?

Texas still plans on having the kids’ fun run before the game, but how will they exit? Last season, kids ran the field north to south and straight out through the tunnel, which no longer exists.

“We’re waiting on the university to give us more guidance (on Smokey),” Martin said. “But we’re planning to have the cannon, Big Bertha, all of it. We’re just trying to figure out where it’s all going to go.”

The renovations also mean that gates 1 and 32 on the southern corners will be closed to pedestrian traffic in 2019, Martin said. Gate 1 on the southwest corner is a major fan entrance for those walking northbound on San Jacinto Blvd. Gate 32 is a major student entrance.

Gate 1 is also where Bevo XV and the team entered the stadium after walking down Bevo Boulevard during the pre-game festivities. Martin said a small entrance will be established for the mascot and team. It just won’t be big enough for patrons.

The Texas band will also have a new entry path this season. Historically, the Longhorn band entered the stadium through the north gate, marched straight through the food court, into a tunnel and onto the field. That tunnel is now closed off, due to construction of the new Texas Hall of Fame.

The Hall of Fame, funded through a donation from Frank Denius’ family, is on track to be open in August, Martin said. The facility will honor UT’s 55 national titles in all sports and countless achievements through the decades.

Football trophies — like UT’s Waterford crystal footballs representing its four national titles, and copies of Earl Campbell’s and Ricky Williams’ Heisman Trophies — will be on display. A team spokesman said duplicates of those trophies will remain in the Moncrief-Neuhaus Athletic Center.

The band may likely enter the stadium through the loading dock, come up the internal tunnel and, like it always has, still come onto the field through the north end zone portal.

Texas officials have other changes planned. Del Conte has said he wants Bevo Boulevard to be bigger and better next season. “Smokey’s Midway” will wrap around the stadium’s north side. Inside the stadium, a new Longhorn Lounge will debut for newer club owners in sections 18-19, thereby easing the congestion in the Terrace Club (sections 13-17).

The full game day plan won’t be finalized until later this summer as the season approaches. At the moment, school officials are making sure every seat is full for Louisiana Tech. The second home game against LSU sells itself.

“The thing that we’re telling everybody, the only way to guarantee that you’ll get in the LSU game is to buy season tickets,” Martin said. “I’m just not positive that we’re going to have singles left for that game.”

The Dotted Line: A closer look at the nine new prospects on the 2020 Fabulous 55