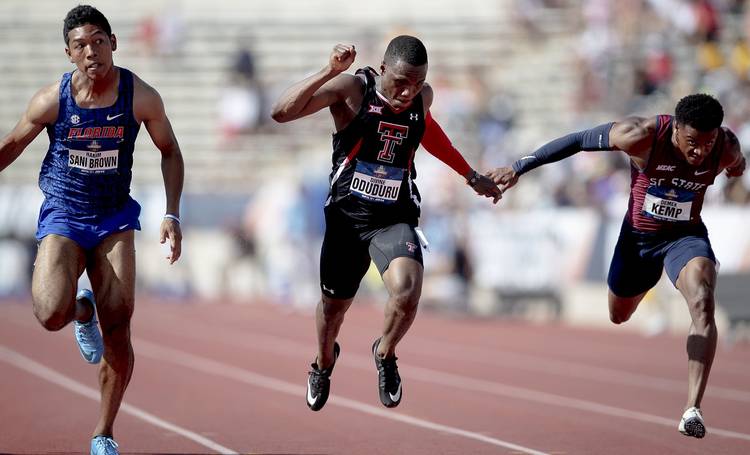 Texas-based sprinters circled the track Wednesday in such a blur, it was practically impossible to keep up at the NCAA outdoor championships. The humidity and intensity only kept rising at Mike A. Myers Stadium.

Fans had their “Guns Up” not long after the gun went off. Texas Tech’s Divine Oduduru cruised through the 100-meter semifinals in 9.96 seconds. Houston’s Mario Burke posted a 9.98.

Double the distance, and here came the same Double T. Oduduru breezed through the 200 meter semifinals in 19.97 seconds. Burke, Texas’ Micaiah Harris and Texas Tech’s Andrew Harris were all fractions behind and advanced to Friday’s finals.

“We’re obviously out here trying to win the national championship,” Hudson said. “This is my first time making the 100. This is the first time I’m healthy at this time of year. I’m happy. I’m ready to go get this 200.”

“Felt a little sluggish in this weather, it’s a little tough sometimes,” London said. Temperatures hovered in the high 80s, and the humidity was in the low 60s around 6:30 p.m. “But you’ve got to learn to roll with the punches, and that’s what I did. No reason to be happy. I’ve been here before.”

Deadmon, a senior, has been running on this track since he was a high schooler at Missouri City. His 400 time was a personal record, “so I can’t complain.”

“Happened at the right time,” Deadmon said. “This is my favorite type of weather to run in. I’m happy to be in this environment.”

Put obstacles in the way, and it still didn’t matter. Houston’s Amere Lattin advanced in the 110-meter hurdles with a time of 13.436. It may take a miracle to win Friday, though. Florida’s Grant Holloway and Kentucky’s Daniel Roberts are expected to duke it out for the NCAA title. Either sprinter could break the meet record of 13.16.

Add water to the mix, and Texans had no problems. UT’s Alex Rogers from New Braunfels had the third-best time in the semifinals of the 3,000-meter steeplechase. He clocked an 8:43.09, which wasn’t too far off the best time by Stanford’s Steven Fahy in 8:41.60.

Other field events were nearing completion late Wednesday. Houston’s Trumaine Jefferson and Texas Tech’s Justin Hall were both in the running in the long jump finals. Texas A&M’s Sam Hardin was just outside the top five in the javelin.

UCLA’s Otito Ogbonnia and USC’s Matthew Katnik were having themselves a Pac-12 face-off in the shot ring. Those two were the only two who had thrown for longer than 63 feet. But Virginia’s Oghenakpobo Efekoro came close with a throw measuring 62 feet, 6 inches.

But the best performances may have been in the stadium’s northwest corner in the pole vaulting pit.

Duplantis, considered the No. 1 collegiate vaulter, passed on the early jumps and even passed on some later jumps. He cleared 19 feet, 1/4 inches on one of the later rounds, putting the pressure on Sam Houston State’s Clayton Fritsch. He cleared 18 feet, 10 1/4 inches before watching the bar get raised even further.