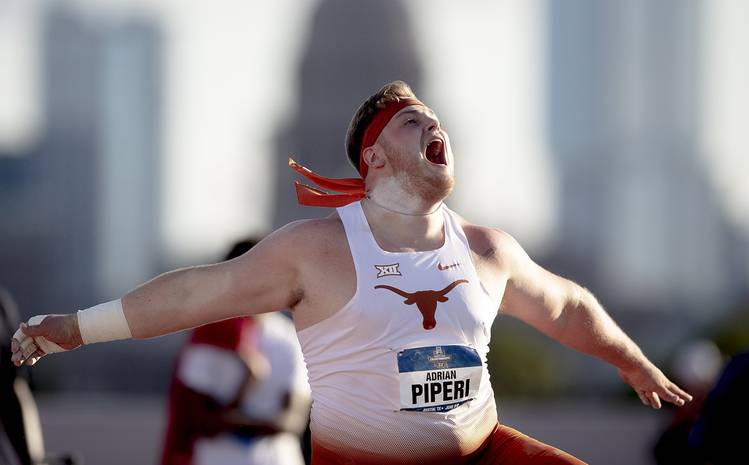 Texas track athletes are celebrating their home field advantage in all its hot, oppressively humid glory.

And the guy with the grandest achievement to celebrate was Adrian “Tripp” Piperi, who won the shot put with a heave of 69 feet, 3 and 1/4 inches. It allowed him to beat defending champion Denzel Comenentia of Georgia.

“I wasn’t going to let anybody come into my house and eat my food,” said Piperi, who carried his NCAA trophy into the media area and showed it off to reporters.

Piperi finished fourth a year ago in the event. His first throw Wednesday was out of bounds. His winning throw came on his second toss. He was a foot better than Comenentia.

Meanwhile, four Longhorns runners successfully traversed the semifinals Wednesday during the opening day of the NCAA outdoor track and field championships at Mike A Myers Stadium. The first of the meet’s four days was all about the male athletes, who competed in semifinals of most of the running events, while deciding winners in some of the field events.

The best performance was turned in by Micaiah Harris, who broke his own school record to qualify for the 200 meter finals set for Friday. He’s only owned the record for two weeks, since he ran a 20.21-second time in the West prelims to qualify for Wednesday’s semifinals.

Before Harris’ recent success, the Longhorns’ school record-holder was Tony Jones, the two-sport star who ran a 20.28 in 1987.

Harris ran a sizzling 20.09 during his late afternoon heat, with heat being the operative word.

“My goal coming in was to make finals,” Harris said. “It felt pretty good, but I know I can continue to run faster I just need to execute properly. My finish, I tightened up and my start wasn’t as good so if I get it together I should be able to run sub-20.

“It’s a lot of fun running on your own track where you train all year. I’m really looking forward to running here in the final on Friday.”

Harris’ time was the fourth fastest. The only one to break 20 seconds was Texas Tech’s Divine Oduduru, the defending NCAA champion.

Sam Worley, the Longhorns sophomore, conceded he struggled through the final 15 meters of his semifinal in the 1,500. The heat, which approached 90 degrees, and the heaviness of the air, threatened to suck the energy out of his body before he crossed the finish line.

He still got through it, coming in second in his heat with a time of 3:46.43. The time was only the 11th fastest of the semifinals, but all he needed was to finish in the top five of his heat to clinch a final spot.

“You go out there and compete, anything can happen,” Worley said.

Worley and the rest of the Longhorns are accustomed to the heat. That’s a given. But Wednesday morning storms, which forced meet officials to scramble the schedule, cleared earlier than expected. The humidity stuck around and the heat got worse.

“Nothing can quite prepare you for this.” Worley said.

Longhorns freshman Jonathan Jones was second in his heat of the 400 meters, which qualified him for Friday. He said his coach, Eddrick Floreal, had predicted he’d make it to the final eight.

“It felt good — exactly what my coach wanted, get to the final,” Jones said. “Just want to run a fast time and have fun.” From the time I got here, coach Flo said you’re going to make it to the final. He says some crazy stuff some times, but whatever he says, I just take it.”

Texas senior Alex Rogers was third overall in the 3,200 steeplechase with a time of 8:43.09. He also was third in his heat. He’s expecting big results in his final home meet of his career.