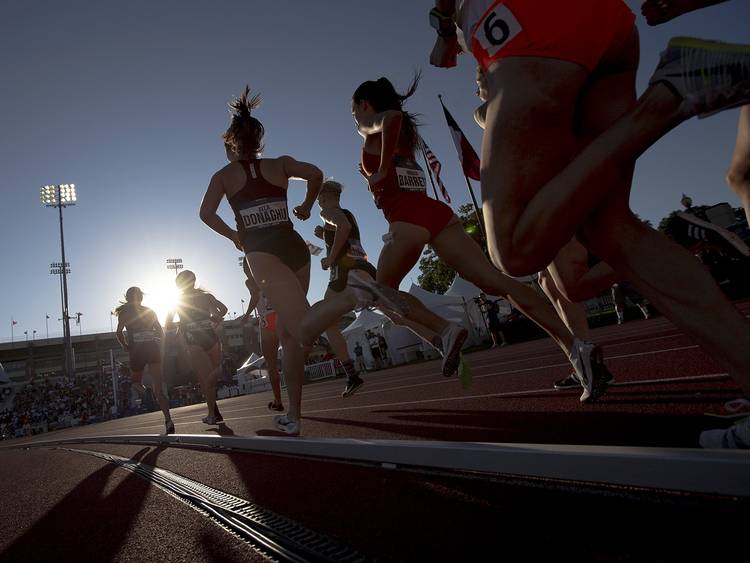 Runners compete in a preliminary of the women's 1,500-meter run during the NCAA outdoor track and field championships Thursday, June 6, 2019, in Austin, Texas. [NICK WAGNER/AMERICAN-STATESMAN]

In football, you always want to score first. Rock ’em, sock ’em, knock ’em back on their heels.

In basketball, that first bucket always feels good. Gets the blood flowing and plants seeds of doubt.

In track, the 400-meter relay sets the tone. The top-ranked Arkansas women’s team started things off Thursday by scorching the track in a school-record 42.65 seconds. But that was only the first heat.

“That just gave us more confidence in all the other events,” Razorbacks sophomore Janeek Brown said. “We put a target on our backs for other people to come catch us.”

Sixth-ranked LSU put its marker down in the second heat, notching a 42.56. Think that’s impressive? Whatever. Next came second-ranked USC in heat three. The Women of Troy blew past everybody in 42.53 during the semifinals at the NCAA outdoor championships.

USC also capped the night with the fastest time in the 1,600-meter relay. Bailey Lear, Kyra Constantine, Anna Cockrell and Lanae-Tava Thomas cruised through to the finals in 3:28.31.

If Thursday’s stunning performances at Mike A. Myers Stadium are any indication, Saturday’s women’s finals will be a scorcher.

Personal records were falling all over the place. And not by fractions, either. Furman’s Gabrielle Jennings shaved 10 seconds off her collegiate best in the 3,000-meter steeplechase — a rather lengthy jaunt compared to the lightning-quick sprints.

“Growing up, I developed really nice gills,” said Jennings, who grew up in Sidell, La., and is the most decorated distance runner in Louisiana history. She covered the distance in 9:47.84 and was just a heartbeat behind Boise State’s Allie Ostrander, already a two-time steeplechase champion.

“I kind of let her go, and then I felt like I was closing in on her,” Jennings said. “I was like, ‘Whoa, Gabby. You’re going to have to run this again in two more days. Chill out!’”

Gills, or at least goggles and nose plugs, would’ve been handy during the afternoon. A massive thunderstorm blew through the Texas campus, knocking over an ESPN camera and leaving just about everyone waterlogged.

Eventually, the storm passed, the temperature moderated and it was showtime.

Arkansas’ Payton Chadwick walked off the track looking disappointed. She pulled out her phone, checked the online results and saw that she actually qualified for the finals in 12.84. Talk about relief.

LSU’s Sha’Carri Richardson knew to expect fast times, fast results. The 5-foot-1 freshman from Dallas Carter has been thundering up and down this track for years. Richardson tied her personal best in the 100 meters in 10.99 seconds. Hers was the only sub-11 second time on the board Thursday.

“I’m so used to (the weather), and this place holds so many memories for me,” Richardson said. “Good memories, bad memories. I ran here for Texas Relays in high school and (UIL) state meet just as well. It kind of feels like home. It’s not Dallas. But it’s a home away from home away from home, if that makes any sense.”

Texas senior Teahna Daniels had the third-best time in the 100 meters in 11.05 but there were two Trojans hot on her tail. USC’s Anglerne Annelus and Twanisha Terry ran 11.06 and 11.08, respectively.

Annelus had the best 200-meter time in 22.35 while Richardson had the second-best time in 22.37. Brown posted a 22.51, tying the number posted by North Carolina A&T’s Cambrea Sturgis, which was her personal best. Five of the top six times in the 200 meters were personal bests.

South Carolina’s Aliyah Abrams said she tracked the weather and knew the running events would be just fine. When she came out of lane three in the 400-meters, Abrams said she ran smooth. It was a far cry from her herky-jerky effort at the NCAA regionals. She ran in 51.63 seconds there, and it was a new personal best.

This time, Abrams posted a 51.51. “I didn’t feel too much strain. Felt really smooth, really easy,” she said.

Texas A&M’s Syaira Richardson finished third in her heat and had to wait on the final results before she could exhale. Richardson qualified for the finals with a time of 51.60.

“I was pretty confident coming out of that heat even though I came in third that I was going to have a spot in the finals for sure,” Richardson said.

That’s how difficult advancing and, ultimately, winning a NCAA championship will be this weekend. It’s going to take a personal best and then something more. The team championship is totally up for grabs.

“It’s definitely the event,” Brown said. “The weather is great. The support is great. It’s just good energy, so I feel like that motivates the athletes to do really well.”

‘I’m still gunning for the win’: Teahna Daniels to go for the gold three times in her Texas finale