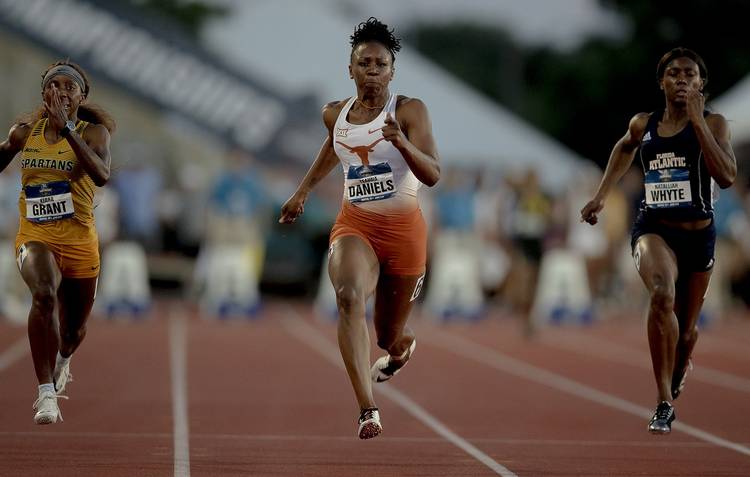 Texas senior Teahna Daniels competes in a preliminary of the women's 100 meters during the NCAA outdoor track and field championships on June 6, 2019 in Austin. [NICK WAGNER/AMERICAN-STATESMAN]

On Saturday, Teahna Daniels will put on a Texas uniform for the last time.

The senior sprinter has professional aspirations, but she admits the thought of becoming an ex-Longhorn hasn’t sunk in yet. That day is coming, though, and Daniels has ensured that she’ll at least have an opportunity to go out with a bang. Thanks to a solid outing at Myers Stadium on Thursday, Daniels advanced to three finals at the NCAA’s outdoor track and field meet.

“Even though I might not be coming in as the favorite right now, I’m still gunning for the win,” said Daniels, who won an indoor championship in the 60 meters as a freshman. “It’s anybody’s race in all of them, so I’m pretty excited.”

Daniels posted the third- and eighth-best semifinal times in the 100- and 200-meter dashes. She was one of five women to qualify for the finals of both races. The Orlando native also ran the second leg on a 400-meter relay team that was bested by only USC, LSU and Arkansas.

After claiming the last spot in the 200-meter final with a time of 22.65 seconds, Daniels said she had “nothing to lose” in that race. She was a bit more disappointed in her showing in the shorter sprint.

Daniels entered the week as the 100 meter’s top seed and she did win her heat on Thursday. A time of 11.05 seconds, however, fell behind LSU star Sha’Carri Richardson (10.99) and North Carolina A&T senior Kayla White (11.01).

Daniels blamed a lack of focus for a performance that was still one of the ten best in UT’s history. Distracted by what she thought was a slow gun and the starting-line stumble of Oregon’s Brianna Duncan, who was two lanes over, Daniels said she got off to the worst start in her eight-sprinter heat. She recovered to nudge Norfolk State sophomore Kiara Grant  by 0.11 seconds.

“Just imagine what the final is going to be like,” Daniels said.

Awake since 6:30 that morning, Daniels asked reporters for the time following her last race of the day. When told it was 9:40 p.m., Daniels said she was “pretty tired right now. But I’m happy, though. I made it in all three. I checked my list.”

One of those check marks was a team effort. Texas’ time of 42.84 seconds in the 400-meter relay matched the second-best time in school history. The Longhorns’ line-up of Daniels and freshmen Kennedy Simon and Kynnedy Flannel recently had senior Zola Golden replace the injured Julien Alfred.

“I’m used to running third leg on the 4×1, but they’ve been training together all season,” Golden said. “It was a little bit different with me hopping in at first, but I think we’ve gotten used to it.”

Aside from Daniels and the 400-meter relay team, no other Longhorns qualified for a final on Thursday evening. Those UT athletes will be joined on Saturday by senior Ashtin Zamzow, who will be wrapping up a heptathlon competition that begins on Friday.