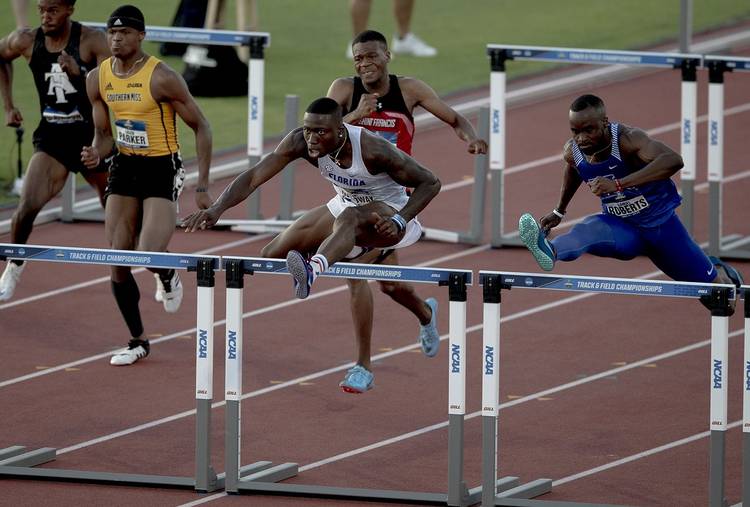 Grant Holloway sported a bouncing, buoyant sort of energy as he flitted down the Myers Stadium field late Friday to pick up all his accolades..

Outside of Texas Tech sprinter Divine Oduduru, Holloway, the dynamic Florida runner, was the most dominant athlete competing during Friday’s session of the NCAA outdoor track championships.

He jump-started the evening by running a leg on the Gator’s NCAA winning 4X100-meter relay.  Their time of 37.97-seconds was the fastest ever recorded by a collegiate team and the only squad ever to dip below 38 seconds.

That was just a preview of Holloway’s plans for the evening, which concluded the men’s side of the NCAA meet.

Holloway blew through his specialty, the 110-meter hurdles, with a blistering time of 12.98 seconds. He held off his SEC rival, Kentucky’s Daniel Roberts, by .02, basically the time it takes to snap your fingers.

Now, for some context.

Holloway’s time is the fastest in the world this year.

It was his time in Friday night’s event that created a buzz that swelled through the stadium. Sure, it was the fastest in the world, so far. The track season still is young.

But he took down the collegiate record that had been held by hurdling legend Renaldo “Skeets” Nehemiah, who ran a 13 flat in 1979 when he was a sophomore at Maryland. When Nehemiah flirted with 13 seconds 40 years ago, it was a world record.

Holloway was so thrilled with his time that he preened for the cameras, crossing his arms. He then smiled and held an imaginary phone to his ear.

Moments later, he sprinted to the mixed zone interview area. But he gave no interviews. He ran up to the nearest reporter with a video camera and screamed “eat your words.”

Holloway finished his evening with even more flare, running the anchor of the 4X400 relay. He couldn’t catch Texas A&M’s anchor, who helped lead the Aggies to the NCAA title and the second-fastest time in the college ranks. But Holloway’s split of 43.75 was the fastest in the field.

Then he started talking as he walked with reporters across the field.

What did he think of his race? He said he was glad he didn’t run it “like the s word.” Then he looked at his coach to make sure she knew he didn’t curse.

Holloway said he’d never met Nehemiah, who couldn’t run in the 1980 Olympics because of a U.S. boycott. But someone told Holloway Nehemiah was in the crowd Friday night.

“Please tell him I said hello,” he said.

And off he went to the award’s stand to collect his hardware. His team finished second behind Tech. He needed to soak in his final collegiate experience.