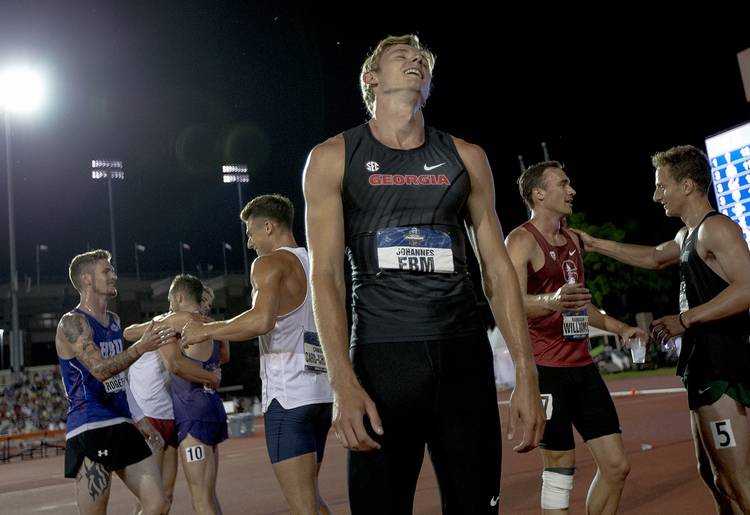 By the time Johannes Erm picked up his award for winning the NCAA decathlon title late Thursday night, he’d been at the track more than 12 hours.

He’d held the lead in the decathlon, which stretched through a marathon two days and 10 events at Mike A Myers Stadium,  since 2 p.m. Wednesday, or after he finished the long jump, his second event.

So how did Erm immediately celebrate his first NCAA title? He asked for some water. He chugged down a cup, then drained a bottle.

He didn’t appear to be that impressed with what he’d just accomplished.

Erm, the guy who competes in spaghetti socks because of a team nickname, finished the event by winning the 1,500 meters. Because of two different storm delays, the last race was pushed back more than an hour.

He scored a personal best 8,352 points. But before he’d arrived at that point Thursday, Erm had had run the 110-meter hurdles, thrown the discus and the javelin and competed in the pole vault. The decathletes always finish off with the 1500, which is four, leg-draining laps around the track.

Erm’s score also had a national impact, with the total the sixth-highest ever recorded in the college ranks.

After Thursday, Georgia athletes owned spots five, six and seven on the collegiate list. Erm missed the school record, which would’ve surpassed No. 5 on the list, by six points.

Stanford senior Harrison Williams was second with a score of 8,010 points. He’d been firmly in second place since the second event.

Arkansas’ Gabe Moore was third with 7,780 points.  Mario Sategna, the former Texas head track coach, now is on staff with the Razorbacks and helped guide Moore to the bronze.

Erm finished third a year ago. The event was so dominated by seniors that six of the top eight finishers were competing in their final collegiate event. Erm injured his ankle in the pole vault and finished only 14th in the 1,500.

But his stay in Austin was dominant, no matter whether Erm was running or throwing or vaulting.

Erm said his usual strategy is to build a big lead through the first day of action, then hold on. But he was better Thursday than Wednesday, finishing second in the hurdles, discus and pole vault, the first three events. His worst event of the 10 was the javelin _ he was eighth.

Erm plans to leave Georgia for Estonia, his home country, in 10 days. He’ll be competing in the European Under 23 championships in July, then head back to college.

Georgia is the top program for the decathlon. Since 2013, the Bulldogs have produced 13 finalists.

‘I’m still gunning for the win’: Teahna Daniels to go for the gold three times in her Texas finale