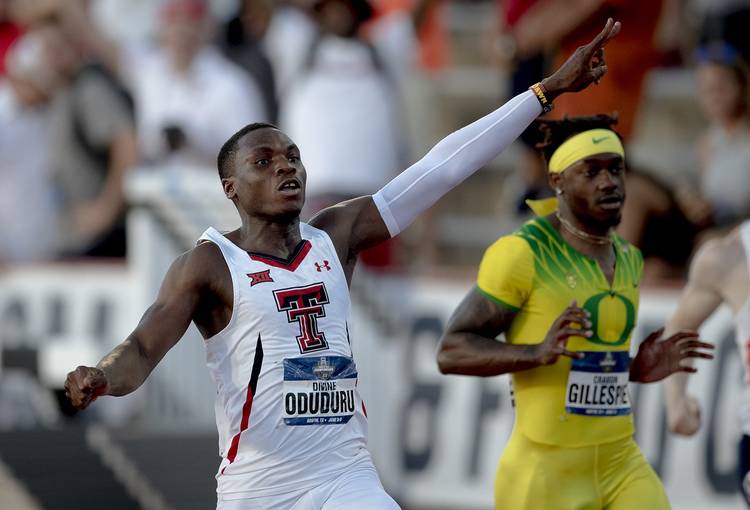 Texas Tech’s Divine Oduduru doesn’t consider himself an athletic superstar. The Nigerian sprinter is the youngest of 10 children born into poverty but has Texas-sized ambitions.

As coach Wes Kittley said, “He’s hungry and he wants to be great.”

Oduduru said you can never know how anyone else feels on race day. But he woke up Friday ready to win a national championship.

“At first when I woke up this morning,” Oduduru said, “I was like, this is a big day.”

Oduduru blew through the 100 meters in a personal-best 9.86 seconds. Then, he clocked an NCAA championship record 19.73 in the 200 meters, another personal best.

Only 10 men in history have ever run a sub-10 and sub-20 combo on the same day. “Yeah, I believe I can go faster,” Oduduru said with a huge grin.

Oduduru’s two titles along with Eric Kicinski’s win in the discus helped the Red Raiders achieve something once thought impossible on the South Plains. Tech racked up 60 points and won the school’s first national title in track and field at the NCAA outdoor championships.

“Raider! Power!” could be heard throughout Mike A. Myers Stadium after the Red Raiders were presented the championship trophy.

Houston finished third overall with 40 points, Texas A&M was sixth (29 points) and Texas was ninth (26) as the NCAA hosts.

“I knew this was the best team I’ve ever had, and I knew we had the best team in the country,” said Kittley, Tech’s coach the last 20 years. “But you’ve still got to show up at the best meet in the world. It took my whole group, and we just stepped up and got it done.”

It was Tech’s first national title in any men’s sport in school history. The school’s only other NCAA team title was the 1993 women’s basketball championship. With all due respect to coach Chris Beard and his men’s basketball team’s magical postseason run, this was Tech’s shining moment.

The Raiders placed third in the 400 relay team to start the night, giving them a good start in the overall standings. Then, it was time to watch some drama in the longer distance events.

The 3,000 meter steeplechase turned wild on the final lap. The leader on the final turn, Indiana’s Daniel Michalski, stumbled just enough on the penultimate hurdle that Stanford’s Steven Fahy took the lead. But Fahy then clipped final hurdle on the home stretch and crashed to the track.

Fahy got up, quickly looked behind at the oncoming chase group and hustled to the finish line in 8:38.46. It was the first time a Pac-12 runner had won the event since 2008.

“It was a blur,” Fahy said, “but honestly, all that was going through my head was I could still win this thing. Get up, get oriented and just keep sprinting.”

It doesn’t matter how you start.

It’s how you finish!

When you have heart like Steven Fahy of @StanfordXCTF, you dust yourself off after a fall over the final barrier and bring home that #NCAATF 🏆pic.twitter.com/lPifZXwSFl

Florida’s Grant Holloway got the better of his rival, Kentucky’s Daniel Roberts, in the 110-meter hurdles. Holloway ran a personal-best 12.98 and talked smack to some slack-jawed track scribes on the way out. “Eat your words!,” Holloway yelled.

Houston’s Kahmari Montgomery won the 400 meters and set a new personal best in 44.23. Kansas’ Bryce Hoppel also set a personal best with his 1:44.41 in the 800 meters. All that time running through Hogan Park Golf Course in Midland paid off for the West Texan, who went undefeated this season.

“it’s just kind of incredible to close the storybook ending,” Hoppel said. “Actually, we stayed on one golf course and ran there every day. It kind of got old, but it was long enough.”

Texas Tech’s Norman Grimes finished second in the 400-meter hurdles in 48.71, which helped push the Raiders into title contention.

“I had really good first five hurdles,” Grimes said. “I actually kind of messed up at (hurdle number) seven and 14. So I just had to stay calm and switch the rest of the way. It wasn’t my original race pattern, but I still (set a new personal record). By a lot.”

In the middle of the stadium, Kicinski was busy throwing a discus high into the night’s sky. His throw of 205 feet, 2 inches was just two inches more than North Dakota State’s Payton Otterdahl. His championship-winning throw is what gave Tech enough point cushion to start celebrating.

“What it means to me is everything, because I love Texas Tech,” Kittley said. “To be able to bring that first national championship for the men to Texas Tech, I mean, it’s the greatest feeling in the world.”

Kittley thanked the Tech board of regents, school administrators and athletic director Kirby Hocutt for believing in him and the program. The team practices every day in the sparkling Sports Performance Center, a $48-million facility that includes an indoor track.

“A lot of people said we couldn’t win there,” Kittley said. “We just wanted to show ’em.”

Oduduru sure did. The junior is likely to go pro this summer. It’s impossible not to think he’s got Olympic glory in his future. Right now, he’s among the best sprinters in the world.

“When I hear stuff like that, I just encourage myself and tell myself that this is the beginning of great things,” Oduduru said. “I have to put my head down, get my focus, believe in my coach, do the right thing at the right time, be humble to everyone, be obedient to the rules and regulations and I knew it was going to be great.”