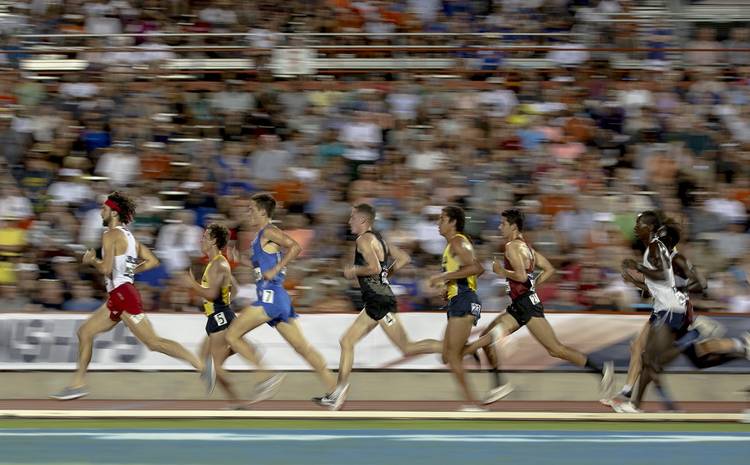 As his unbeaten streak continued to grow, the next race was always the most difficult one for Kansas junior Bryce Hoppel.

“Whatever race I run is the hardest,” Hoppel explained.

Hoppel culminated his perfect season by winning the men’s 800 meters at the NCAA Track and Field Championships Friday night at Myers Stadium. Hoppel’s greatest win to date hiked his 2019 outdoor record to 19-0. Factor in Hoppel’s 6-0 indoor record that also resulted in a national championship in March, and his overall record in the 800 meters this year is an unblemished 25-0.

“It’s incredible,” said Hoppel, who also went undefeated in the 800 meters when he won the event representing Midland High School at the 2016 Texas state championships. “Doing it the first time indoors, I had nothing to compare it to. Now I have something more to grasp and know how it feels.

Indeed. Not getting off to the fast start he desired, Hoppel cleverly avoided being boxed in and established his pace to outdistance Texas A&M’s Devin Dixon and Iowa State’s Festus Lagat. Texas A&M’s Carlton Orange was fourth, giving the Big 12 three runners among the top four.

“Right at the beginning, I wasn’t quick enough and almost got boxed in. Luckily, the guys let me out and I got to the spot I wanted. It was a perfect race,” said Hoppel, whose career-best time of 1:44.41 to win the national championship is one-tenth of a second off the mark of the school record set by Olympian Jim Ryun.

“Going into it, you’ve got to have confidence and know you’re going to win,” Hoppel said. “Run one race at a time. Never give up, and run your heart out.”

LSU’s Harrison double dips: LSU sophomore JuVaughn Harrison became the first athlete in the history of the NCAA Track and Field championships to win both the long jump and high jump in the same year.