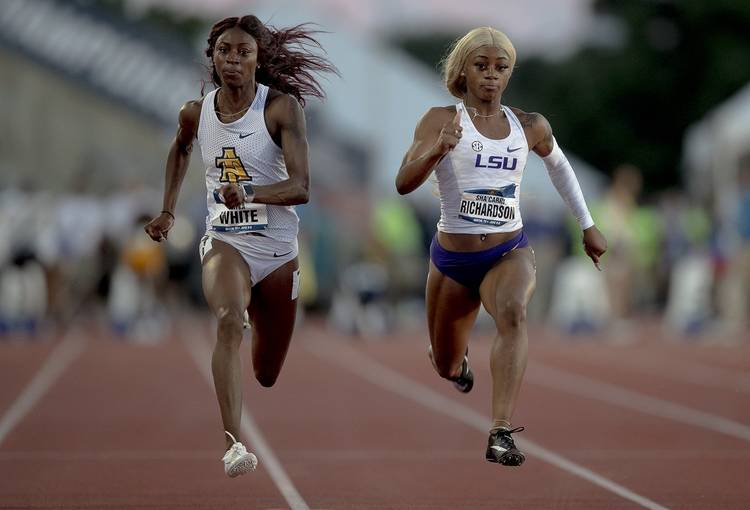 North Carolina A&T's Kayla White, left, and LSU's Sha'Carri Richardson compete in a semifinal heat of the women's 100 meters during the NCAA outdoor track and field championships Thursday. They posted times of 11.01 seconds and 10.99 seconds respectively, the fastest marks in qualifying. [Nick Wagner/American-Statesman]

“My goal was to make it to the finals and do the job that we came here to do, which is to let the nation know A&T is calling,” said Dickson, referring to the Aggies status as an HBCU member. “Being a member of a HBCU is a great starting point for us, but we don’t limit ourselves to just HBCUs. It’s great to know where we came from, but we compete against everybody.”

The Aggies produced 14 qualifiers at the 2019 NCAA Track and Field championships under coach Duane Ross, a member of the 2004 U.S. Olympic team and seven-time All-American at Clemson who specializes in the 110-meter hurdles.

“Coach Ross, man, that’s all I can say,” Dickson said. “He’s like your father away from home. He keeps us in line. If my head gets too big, he makes sure to get me back in line. He keeps all of us in line, as you can see from the success we’re having. Listen to coach, and good things happen.”

As expected, North Carolina A&T, ranked as high as No. 6 in the country this year — highest ranking ever for a Division I historically-black college, advanced to the national finals in seven events (four men, three women) over the first two days of competition.

Kayla White, a senior from Miami, is A&T’s headliner after winning the NCAA indoor national championship in the 200 meters in March, the first national title in school history. White will compete in Saturday’s finals in the 100 meters, 200 meters and 4×100-meter relay.

“It means a lot,” White said. “Indoors was a really big season for us when I won my first national championship. I feel like we’ve been on the map before, but we’ve kind of been low-key. People weren’t really paying attention until the indoor season — that was really big. Right now, everybody knows who we are. Every time we step on the track, we’ve got to show that A&T pride.”

Among the men, A&T junior Trevor Stewart bears close watching based on his second-place finish in the 400-meter semifinals behind Houston’s Kahmari Montgomery. The 400 final is scheduled for Friday at 8:32 p.m.

The Aggies don’t plan on becoming a one-hit wonder as the success of the men’s and women’s programs is now attracting nationally-ranked recruits such as Randolph Ross, the coach’s son, who in May selected the Aggies over Ohio State, South Carolina and Iowa. Randolph Ross recorded the fourth-best high jump and ninth-fastest 400 time in high school this year.

“Like coach said, we’re setting the stage for those who come after us,” Dickson said. “For those of us who make it on a national level, this isn’t for us, it’s for those who come after us and the program itself. He told us a couple years from now, when we come back, we’ll be jealous of all the stuff the guys got from what we did. But it makes you proud to know you laid the foundation for someone else.”