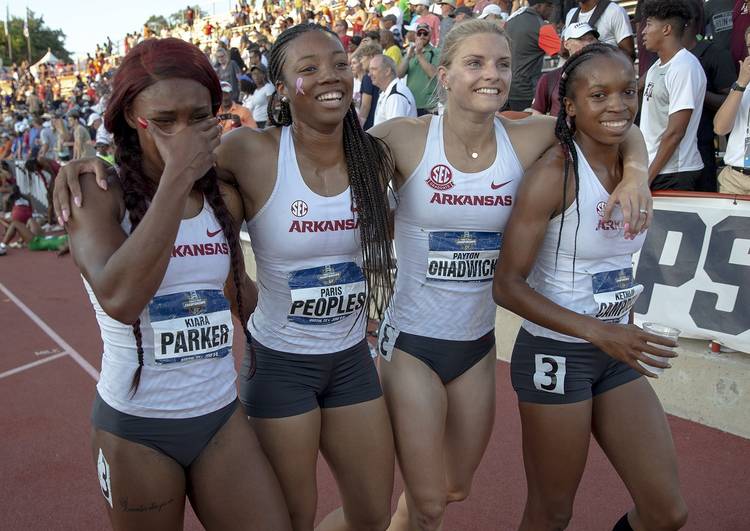 Arkansas and USC athletes knew Saturday would be a long, hot dogfight in the withering Texas heat at the NCAA outdoor championships.

The nation’s top two women’s track and field teams were scheduled to meet in six different events. May the fastest women win.

The Women of Troy landed the first punch by winning the 400 relay in 42.21 seconds, the fastest time in the world this year. The Razorbacks were third, but USC’s relay member Chanel Brissett said the Trojans were solely focused on themselves. “I’m just glad to get the 10 points,” Brissett said. “It gets me warmed up.”

It was all tied through 15 events, both teams having 43 points. USC pulled ahead when Anglerne Annelus leaned in ahead of LSU’s Sha’Carri Richardson in the 200 meters. But Arkansas’ Taylor Werner nearly broke down in tears after finishing second in the 5,000 meters, tying it up again.

“I ran back down the homestretch and my coach was like, ‘You just tied the score!,’” Werner said. “I was thinking thanks goodness, because that hurt so bad. I’m glad it was worth it.”

After the 1,600-meter relay, the Razorbacks were the ones calling the Hogs at Mike A. Myers Stadium. USC’s Anna Cockrell got tied up with another runner and accidentally dropped the baton. Arkansas finished second in the relay, but it was enough to help the program clinch its 45th national title between the men’s and women’s programs.

“When I saw the mishap, I thought, ‘Oh my God I hope we’re not involved,’” Lance Harter said. The longtime Arkansas coach said Payton Chadwick, his “big, blonde powerhouse,” was able to avoid the mishap and keep moving.

Arkansas finished with 64 points, USC was second with 57 and LSU finished third, mostly on the strength of Richardson’s day. Texas finished ninth overall with 20 points on its home surface.

There’s simply no getting around it. Richardson, a freshman from Dallas Carter, was sensational. She arguably stole the show. In the 100 meters, the spunky speedster set a new collegiate record by storming down the track in 10.75 seconds. That broke a 30-year-old record set previously held by LSU’s Dawn Sowell.

Then, Richardson went blazing down the runway in the 200 meters. She was step for step with Annelus, a junior, but the Trojan knew to lean forward at the finish line. Annelus finished in 22.16; Richardson crossed in 22.17.

“You know, it was a toss-up,” Annelus said. “I know we were both running at the line, so i was happy to see my name pop up first.”

Richardson’s buzz-worthy performances didn’t zap Teahna Daniel’s spirit. The Texas senior finished fourth in the 100 meters (11.00) and fifth in the 200 (22.62). “It still really hasn’t set in that I’m done with college yet. I finished my best season here at Texas, so I’m really excited.”

Nobody could top Ashtin Zamzow’s excitement level, either. The Texas senior, who once transferred from Texas A&M and had to win back over her Aggie family, won the NCAA heptathlon championship with 6,222 points.

Zamzow said her father was shouting “Texas Fight!” in the stands and hugged his daughter while wearing an A&M hat.

“It was a dream I couldn’t have thought I would’ve lived,” Zamzow said. “It was just out-of-this-world feeling, experience, everything, it was perfect.”

Boise State’s Allie Ostrander, who has 11 All-America honors, won her third straight title in the 3,000 meter steeplechase. She set a new personal best in 9:37.73 and celebrated by taking a victory lap in front of the crowd of 10,163. The four-day attendance total was 37,098.

Oklahoma State’s Sinclair Johnson also finished her season in undefeated fashion by winning the 1,500 meters in 4:05.98. After the two incredible distance races in 98-degree temperatures, the public address announcer was so fired up, he bellowed, “Take that Mother Nature!”

The Razorbacks will be the ones taking the trophy back home to Fayetteville.

“Honestly, you’ve got to have confidence and believe you can do good,” said Arkansas’ Janeek Brown, who won the 100-meter hurdles. “I came away with two personal bests at this meet, the toughest meet in college track and field.”