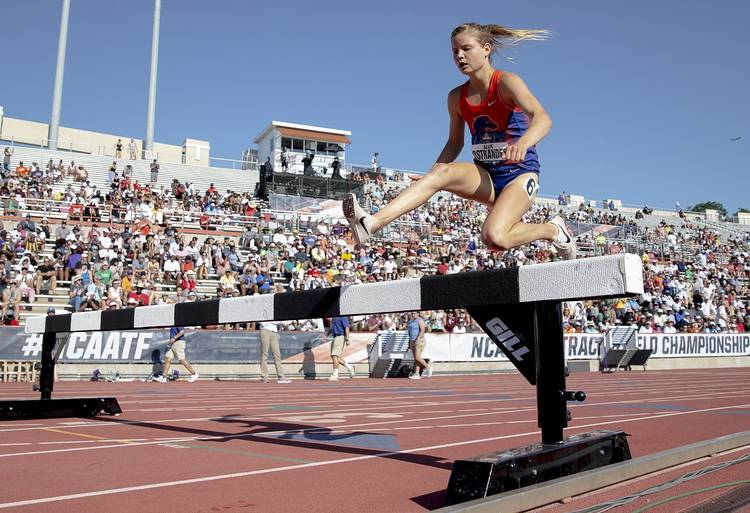 Allie Ostrander first started honing her racing skills when she was in grade school. That’s when she’d run with other girls and boys her age and conquer the Mount Marathon in Seward, Alaska.

Competitors ran up the mountain, with the course climbing more than 3,000-feet in elevation. It always was celebrated in conjunction with the Fourth of July.

So a Saturday in Austin in early June, running a flat course at Myers Stadium in sizzling 98-degree heat, wasn’t much of a problem for Ostrander, the 5-foot-1, 100-pound junior from Boise State.

She ran away with the 3,000-meter steeplechase during Saturday’s NCAA outdoor track and field championships.

Then she celebrated with a victory lap as she held up three fingers to the crowd.

That’s three straight wins in the steeplechase for the petite Ostrander, who became the first  female steeplechaser in NCAA history to do so.

Only 14 women before Saturday ever had won three straight in any event at the NCAA outdoor meet..

On the men’s side, which was completed Friday, Florida star Grant Holloway extended his winning streak in his specialty, the 110-meter hurdles, to three in a row.

New Mexico’s Charlotte Prouse was second and nearly seven seconds behind Ostrander. She was thrilled with the effort.

“Allie is phenomenal,” Prouse said. “I can’t complain about being (second).”

Ostrander, in an interview with ESPN immediately after her race, proclaimed: “I feel so hot right now, and not in the attractive way, I feel like I’m really low on the scale in that department.”

She’d cooled down, somewhat, by the time she jogged over to the mixed zone/interview area.

By then, the oppressive heat, which was particularly tough for distance runners to endure, was a distant memory.

“It feels amazing,” Ostrander said. “This is just my own. This is really special.”

The steeplechase is track’s most unique event. It’s an endurance race. Athletes run eight laps around the track. But there also are hurdles to jump. One of them has a water hazard as runners make the final turn to complete each lap.

Ostrander said she took up the steeplechase her freshman year at Boise because of her sister, Taylor, who ran the event when she competed for Willamette, a Division III school in Oregon. The younger Ostander also saw her cross country career stall because of stress fractures in her legs. When she won her first steeplechase title as a freshman, she told reporters she was “giving the middle finger” to her previous injuries.

Ostrander wasn’t finished at Myers Stadium. She also ran the 5,000 meters, a race that was about 90 minutes after the steeplechase. Like she did before the first race, she said she took extra precautions for the heat, drinking plenty of water and wearing an ice vest.

But she struggled in placing 16th, almost 38 seconds behind champion Dani Jones of Colorado. It was her worst performance in the 5,000 at an NCAA event.

The Alaska native said she runs the different distances for “variety.”

But she acknowledged that the 3,000-steeplechase now was her favorite distance.  An an Austin afternoon in June probably will be her favorite athletic memory.