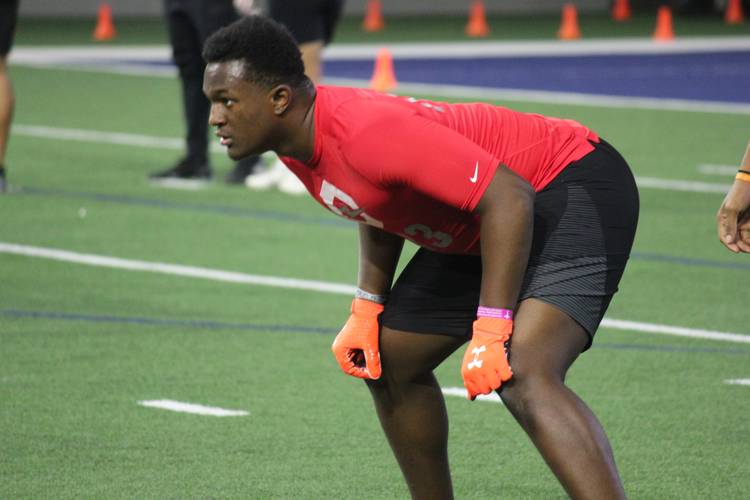 Texas’ 2020 class sits at six commitments. Each of those pledges project to the offensive side of the ball. That means that Tom Herman, defensive coordinator Todd Orlando, and the rest of the staff must start landing the top prospects on the board or risk moving toward new options. The next two months are set to dictate the success Texas achieves in the 2020 cycle.

Let’s examine the top defensive targets at each position.

Broughton is the priority. Texas utilizing an odd-man defensive front means the Longhorns need fewer true tackle prospects. Orlando would rather find oversized defensive ends who can spin down to tackle rather than sacrifice athleticism. Broughton is the perfect fit. The four-star from Houston Cypress Ridge is the No. 8-ranked player on the Fabulous 55 and the highest-rated defensive lineman in the state.

Broughton is still growing in stature and as a football player. Football didn’t become his primary sport until high school. The 6-5, 286-pound prospect holds 25 offers and has taken an official visit to Texas. Arkansas, LSU, Texas A&M, and Ohio State are the primary competition. Broughton was a first-team all-district performer as a junior and is expected at The Opening Final in Frisco at the end of June.

Texas’ top two targets at defensive end live within 30 miles of campus. Collins is the best defensive end prospect in the state because of his 6-5 frame and the athleticism carried over from playing basketball his entire life. He’s still improving at the position with football not becoming a priority until high school. The Bastrop Cedar Creek star’s upside is unlimited once he’s in a college strength and conditioning program. Texas A&M is a real threat for the long, athletic pass rusher.

Umanmielen is a bigger-bodied end with the ability to play the 4i position that Texas deploys up front. The Manor product is also high on Oklahoma. At 6-4, 256 pounds, he isn’t as long as Collins but he’s stronger at the point of attack and ahead in his development in the weight room and technique. Both are ranked on the Fab 55.

Wilmont is a new name to watch. The Florida native received a UT offer on June 3. The 6-3, 248-pound three-star target holds a dozen offers.

Texas is the current favorite for Dorbah and Scott, both outside linebackers. Dorbah plays defensive end for Highland Park, the defending three-time Class 5A Division I state champions. Dorbah plans to move to B-backer if he chooses Texas. He’s down to LSU and the Longhorns, and he’s expecting to pick a school by the end of July. He’s recorded 30 sacks over the past two seasons.

Scott is a bigger outside linebacker who could also move to Rover or Mac in Texas’ scheme. He hails from Daas Bishop Dunne, a school that Texas has raided successfully once in this cycle by landing three-star athlete Jaden Hullaby. Scott recently named Texas in his top five.

Flowe, the best inside linebacker prospect in the country, is considered a longshot. California proved good recruiting ground for Herman in the past, however. Sellers is an outside linebacker from Arizona, which is home to multiple targets for Texas. The Longhorns signed two players from Arizona in 2019.

Texas is among the top three teams remaining for Crawford, a speedy cornerback from Tyler John Tyler. The Longhorns must fend off Oklahoma and Tennessee. Crawford is the favorite to win the 100-meter dash in Class 6A next school year. He’s also 5-11, 200 pounds and unafraid of the physical nature Texas demands from its defensive backs. Hes listed as an athlete on recruiting sites because he’s also played running back. But the Fab 55 member knows cornerback is his future.

The same is true for Rogers, the star quarterback at Arlington. The 6-foot  four-star prospect is the 10th-ranked cornerback in the country despite not playing the position full-time in 11-man football. He has impressed at corner in elite camp settings like The Opening regional and in 7-on-7 football. His athleticism is undeniable. His future simply depends on how easily he moves to defense.

Ringo is the big fish. The 6-2, 205-pound prospect is an Arizona native who is considered the best cornerback in the country. The Longhorns feel good about their situation, earning an official visit.

Thompson feels like a sure-bet to eventually join the Texas class. The four-star safety from Duncanville is teammates with Ja’Quinden Jackson, who has pledged to UT and is leading a charge of DFW recruiting. Thompson is a big-bodied safety who has spent time at outside linebacker. Texas likes him at the Joker position.

Washington is down to Texas and Oklahoma. He made an unofficial visit to Texas last weekend and is expected to take an official visit to Austin at the end of June before picking between the Red River rivals. The 6-2, 196-pound four-star is a pure athlete with upside.

Ransom is another Arizona prospect that Texas hopes to land. He’s the fourth-rated safety in the country, and the highest-rated player at the position with a UT offer. His busy June includes official visits to Texas, Notre Dame and Ohio State. He took an official to Oklahoma and LSU in April.

Handful of top targets in 2020 class ready to visit Texas