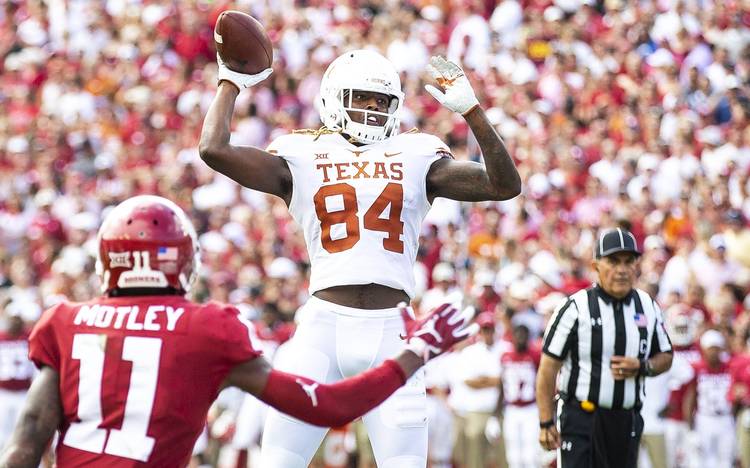 “The goal is to try something awesome,” Del Conte said at the time, “and it’s going to take us two or three years to truly perfect it.”

The Texas athletic department is a constant work in progress, but there were some awesome moments during the 2018-19 athletic year.

The men’s tennis team won the school’s 55th NCAA national championship despite losing its head coach in March. The men’s swimming team, men’s golf and women’s rowing teams all reached the NCAA championship finals. Seven of UT’s 20 varsity teams finished ranked in the top five nationally, the most in a decade.

The Longhorns won a league-high nine Big 12 championships this season. “The Franchise,” as Del Conte likes to refer to football, also posted its first 10-win season in a decade, beat Oklahoma in October, reached the Big 12 title game for the first time since 2009 and then crushed Georgia in the Sugar Bowl.

The American-Statesman’s annual preseason list of UT’s top 10 stars to watch had some incredible moments, too. And some painful ones. Here’s a look at how each one fared this athletic year:

Casual observers would have a hard time choosing between all of Humphrey’s sizzling moments. He had a team-high nine touchdown catches, ran for another score and threw a 15-yard touchdown pass back to quarterback Sam Ehlinger against OU in the Cotton Bowl.

But Humphrey’s singular best moment came on a non-scoring play against the Sooners. On third-and-21 early in the second half, he caught what should have been about a 10-yard pass. Instead of falling over, he literally carried multiple OU tacklers downfield and turned it into a 19-yard gain.

It was the kind of determination that Texas athletics historically is all about. Humphrey opted to leave school early and enter the NFL draft; he signed a free-agent deal with the New Orleans Saints.

There were sky-high hopes inside Cooley Pavilion that Sims would step into Mo Bamba’s role and keep UT’s string of future first-round picks intact. Bamba (6th overall pick, 2018) and Jarrett Allen (22nd overall, 2017) truly flourished in December of their freshmen years. Sims was on track during his sophomore campaign before a foot injury brought him to a near stand-still.

As it turned out, freshman Jaxson Hayes got more playing time while Sims was healing and turned into a Big 12 star. Hayes averaged 10 points and five rebounds per game and finished third in the conference with 2.2 blocks per game.

Sims will return for his junior year while Hayes is headed to the NBA draft on June 20. Hayes is likely to become the third straight first-round pick for the Longhorns.

Higgs was supposed to be one of coach Karen Aston’s leaders this season. But the 5-9 senior from Cedar Ridge suffered a torn anterior cruciate ligament injury against Quinnipiac in November, and her season was over after only three games. Named to the preseason All-Big 12 team, Higgs was the team’s leading scorer at the time of her injury. She’ll be a senior next season.

Opposing coaches had White at the top of the scouting report all season long, and the junior delivered. White, the preseason Big 12 player of the year, won the league’s postseason honor with a team-high 3.88 kills per set, 2.41 digs per set and a .310 hitting percentage. White, who will be a senior this fall, is an All-American and is coach Jerritt Elliott’s best player.

The twins from Italy were the top two threats on the women’s team that went 9-0 in Big 12 play and finished ninth nationally in the ITA rankings. Bianca Turati went 11-7 in the No. 1 singles position while Anna went 19-2 in the No. 2 spot. As a doubles pair, the Turati sisters went 15-3. Both should return next season.

It was an historic year for the junior from Garland. Hintzen became the first player in school history to win the Big 12’s offensive player of the year honor. She finished first in the Big 12 in assists (nine), second in goals (10) and first in points (29). The Horns finished the season 13-5-3 and reached the NCAA tournament.

The Texas distance team had a strong year, and Rice qualified for the NCAA outdoor championships in the 3,000-meter steeplechase. He posted a personal-best 8:43.35 to qualify out of the NCAA regional meet in Sacramento, Calif.

The Longhorns’ shortstop was poised to be a locker-room leader. But Hamilton suffered a scooter injury during the preseason and injured his Achilles. He was sidelined the whole season. That didn’t hurt Hamilton’s draft stock, though. He was selected in the eighth round of the Major League Baseball amateur draft by the Milwaukee Brewers. Hamilton could return for 2020, but at this point, it’s unclear if he will.

First-year coach Mike White took an infusion of Oregon transfers and lifted the Longhorns back into the NCAA tournament. Washington, a three-year letter winner at UT, was a second-team all-conference pick who started at first base but moved to left field. She had a key home run in the deciding game of the NCAA regional against Houston and hit .297 for the year.

Handful of top targets in 2020 class ready to visit Texas

The Dotted Line: New offers go out to young prospects after Texas camp