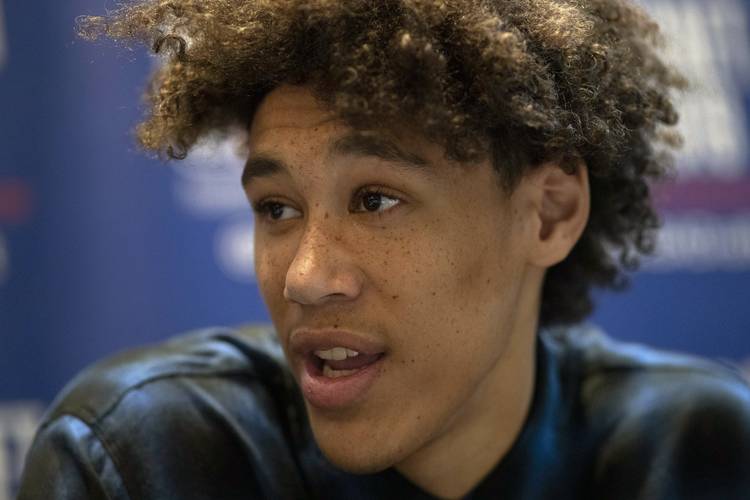 Jaxson Hayes, an incredibly talented 6-11 freshman with a sky-high upside, became Texas’ next first-rounder Thursday night when he was selected eighth overall in the NBA draft in New York.

Fans watching at home may think Hayes is going to Atlanta. But the Hawks packaged the pick and will effectively ship Hayes to the New Orleans Pelicans. Hayes is likely to end up playing alongside the No. 1 overall pick Zion Williamson in what immediately looks like the most intriguing, dunk-happy young team in the NBA.

Most mock drafts pegged Hayes to go 10th overall when measured against other players available and the draft order. That’s about where he figured to go when Hayes met with Austin reporters in May at the end of the spring semester.

Hayes, who turned 19 in May, finished out the spring semester at UT specifically so he would remain in good academic standing. Texas athletics is aggressive about reaching out to former athletes and helping them finish their degrees after finishing their pro careers.

Texas seniors Kerwin Roach II and Dylan Osetkowski are draft-eligible, however they are projected to become free agents.

Athletically, Hayes is a Cincinnati-raised dynamo with floppy hair, soft hands and an old soul. He was relatively unknown during most of his high school years and didn’t really explode physically and athletically until the summer before his senior year.

He committed to UT before Hayes even started his first varsity game at Archbishop Moeller High School. Hayes averaged 12 points, seven rebounds and four blocks per game and was widely seen as a foundational piece to UT’s future.

Hayes had a breakout performance against North Carolina last November with 15 points and nine rebounds. By that point, five games into the season, he already had 11 blocks. He eventually moved into the starting lineup and became a workhorse for UT coach Shaka Smart.

Hayes finished the year averaging 10 points, five rebounds and 2.2 blocks in about 23 minutes per game. A lot of those points were via blocks and layups, a key reason how he shot a school-record 72.8 percent.

The only real oddity from Hayes’ lone collegiate season was that he did not record a single double-double. To paraphrase an old pilot’s analogy, Hayes simply needs to log his 10,000 hours in the gym. His mid-range game needs work and needs to build more upper-body strength.

“You can do the research, but I challenge you to find a 6-11 kid who’s going to be a top-10 pick that never had a double-double,” Smart told NBA.com. “I’m not saying that negatively. Some guys are picked for what they can do in a shorter term. The bigger they are, the longer they are, it’s more about potential.”

Hayes suffered a knee injury in the Big 12 tournament and missed the team’s entire run to the NIT championship. The Big 12 freshman of the year later said he did not require surgery and would start focusing on the draft.

At the NBA scouting combine, Hayes put up crazy numbers. His 7-3 wingspan alone moved him up draft boards. His college numbers look even better when you extrapolate them over 100 possessions per game, a common NBA metric.

Time flies. So happy to share this moment with @hayes_jaxson as he takes a huge step towards achieving his dreams. Proud of you and love you. pic.twitter.com/AllmI2u4jr

His parents, Jonathan and Kristi, were well aware what their son was getting into. Jonathan Hayes was an All-American tight end at Iowa, logged 184 games in the NFL and then was an assistant coach for 16 seasons. He’s now the head coach of the XFL team in St. Louis. Kristi Hayes was one of the best women’s basketball players in Iowa history and an assistant coach at Oklahoma.

Hayes is likely to flash the “Hook ’em” hand sign for years to come, too.

The Dotted Line: Trio of Arizona prospects among legitimate out-of-state targets for Texas