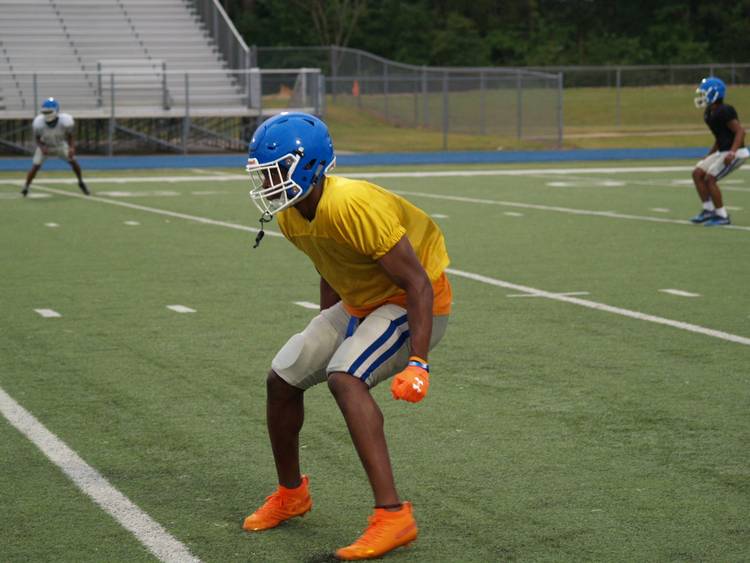 Texas’ 2020 recruiting class grew to seven members Friday night when four-star cornerback Kitan Crawford of John Tyler High School pledged to the Longhorns during a visit to Austin. It might not be the only commitment Texas adds by the end of the weekend.

“Texas provides a great education. It’s the No. 1 business school. It’s close to home,” Crawford said during the spring. “Coach (Jason) Washington is like my dad. He’s cool. I can call him whenever and I know he’ll pick up the phone.”

Crawford is the first defensive pledge for Tom Herman’s program in the cycle with the previous six projected to defense. Crawford is ranked No. 49 on the 2020 Fabulous 55 and is the eighth-ranked athlete in the country, per 247Sports composite rankings.

Skill set: Crawford is fast. Like, real fast. He’ll enter his senior season as the favorite to win the 100-meter dash in Class 6A. Defensive coordinator Todd Orlando craves athleticism on defense and Crawford oozes with potential because of his speed and 5-11, 200-pound frame. Texas also enjoys recruiting versatility, and Crawford is the type of defensive back who can help on the outside, in the slot, or even as a safety.

Crawford’s toughness earned him the honor of wearing No. 24 at John Tyler, a sacred number at the school since it was the one worn by current head coach Ricklan Holmes. Texas is getting a competitive athlete who is still maturing as a football player.

Immediate impact: Texas’ secondary should be one of the best position units in the nation entering the 2020 season with safeties B.J. Foster and Caden Sterns, as well as budding stars at cornerback like Anthony Cook and Jalen Green. Crawford won’t need to step on campus ready to compete for starting snaps, though all positions are open to competition under Herman. Crawford will get a chance to learn and watch the elder statesmen at the position before his number is called. That’s a good thing and the sign of a healthy program.

Fitting into the program: Herman is building a culture of no-nonsense toughness at Texas and he’s right when he says that type of program isn’t for every recruit. East Texas kids tend to be rugged enough for the grind of college football. Expect Crawford to fit into the same mold. He’s a football guy with an elite set of skills. The sky’s the limit for Crawford if he’s patient and works on the finer-techniques of playing the cornerback position.

Recruiting at the position: Texas would like to sign three cornerbacks in the 2020 class. Crawford gives Texas its first piece of the puzzle. Arlington High School quarterback Jahari Rogers plans to switch positions in college, and is a main priority for the Longhorns. He’s also in town for a visit to Texas. The best player available at the position is Kelee Ringo from Arizona. Four-star Ethan Pouncey is also in the mix. His older brother, Jordan, is a wide receiver for the Longhorns.

The Dotted Line: Trio of Arizona prospects among legitimate out-of-state targets for Texas