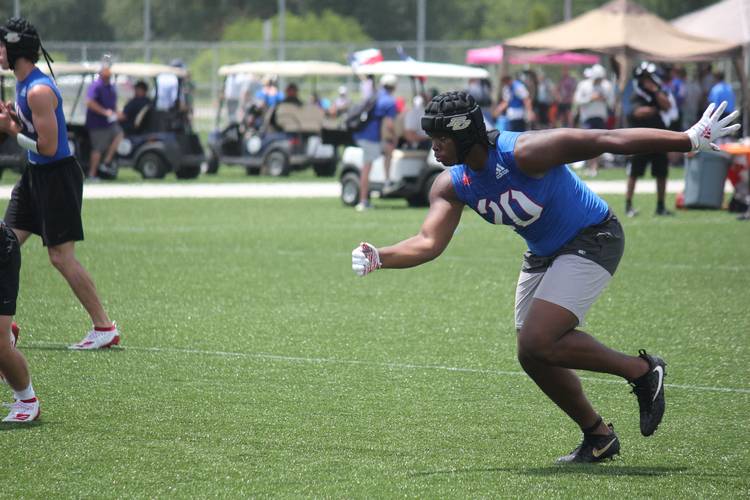 COLLEGE STATION — High school programs from every section of the state converged in College Station starting Thursday for the 2019 Texas 7on7 Championship. The group included John Tyler High School and Texas’ latest commitment, Kitan Crawford. The four-star cornerback pledged to the Longhorns on June 21 during his official visit.

The 5-11, 200-pound prospect picked Tom Herman’s squad over 22 other offers, including Oklahoma and Tennessee. Crawford is ranked 49th on the 2020 Fabulous 55. He’s listed as an athlete on 247Sports, but he’ll play cornerback at Texas.

“Texas felt like home. Everyone was so welcoming to me. It’s hard to find that, so I pulled the trigger,” said Crawford during pool play of the tournament on Friday afternoon. “It was my third or fourth time down there, and it’s always felt great.”

Crawford credits his relationship with cornerback coach Jason Washington as the main factor for his commitment. The two bonded during the recruiting process.

“Coach Washington is like a step-father. We’re real close. I can call him at midnight and he’ll pick up the phone,” he said. “ I trust coach Herman and the staff.”

Crawford recorded 30 tackles, 12 pass breakups and two interceptions as a junior. He’s also a track star who posted a 10.6 in the 100 meters. Crawford is a favorite to reach the state finals in the event as a senior. That unique talent provides him versatility. He’s fast enough to play cornerback and at nickel, and he’s physical enough to play near the line of scrimmage with his 200-pound frame.

“Track helps me a lot in football. It keeps my speed up and keeps my hip loose. My goal as a senior is to win state,” he said. “I can play everywhere. It won’t matter to me.”

Crawford’s nickname is Bug. It’s because he was infatuated with the movie “A Bug’s Life” as a kid, watching it constantly. Deep down, Crawford is a quiet kid from East Texas who is ready to make his mark on Texas’ program.

Two potential Texas targets in the 2021 class led Texarkana Pleasant Grove to the second place in the Division II bracket, falling to Sunnyvale on Friday afternoon. Pleasant Grove is a budding dynasty in Class 4A Division II. It won the championship in 2017 and reached the championship game last year. A strong defensive line is a main ingredient to that success, and it’s led by defensive ends Landon Jackson and Marcus Burris.

Big guys rarely get involved with 7-on-7 tournaments, but Burris was in attendance to play tight end on two-point conversions and in the red zone. Pleasant Grove runs the Wing-T offense, so the squad made-do with the talent it had on site. The 6-4, 262-pound Burris enjoyed his one-time role.

“I take pride in being athletic for a defensive lineman. It’s a great way to get in work,” he said. “I was just trying to be a red zone threat for the team and help the team win.”

Burris is already ranked as a four-star prospect with offers from Texas, Alabama, and a host of other major schools. The incoming junior isn’t ready for recruiting to take center stage in his life with a championship to win in 2019.

“I do my best to block out the recruiting process because I’m focused on getting another state championship ring,” Burris said. “The future will take care of itself.”

Another Pleasant Grove 2021 star who might be in line for a Texas offer alongside Jackson and Burris is running back Nick Martin. The 5-11, 190-pound prospect already holds an offer from UTSA. He can play outside linebacker or running back. Martin listed Texas among the schools he’s interested in that have made contact along with Texas A&M, Oklahoma, and Nebraska. Texas and Texas A&M are interested in him as a running back, though he noted that some programs see him as an outside linebacker.

“I’ll play either, or both,” he joked. “I don’t have a preference. I’ll worry more about that after the season.”