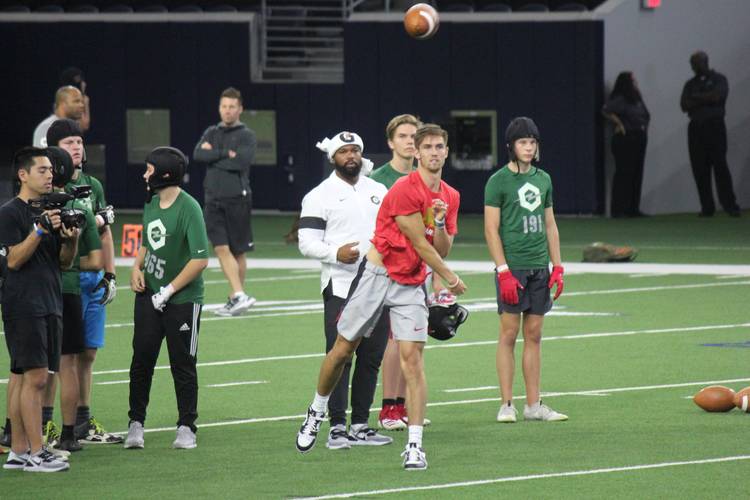 FRISCO — The goal for Lake Travis quarterback Hudson Card is to etch his name next to the recent lineage of great quarterbacks from Austin. The Texas commit is in Frisco for five days competing in the Elite 11 and The Opening events. The 6-2, 179-pound four-star was the Longhorns’ first pledge in the 2020 cycle and is the face of the class.

Card handles the pressure around the media the same way he does from the pocket: With poise.

“I feel like I already represent Texas,” Card said. “It’s close to my home. I was the first commit. I play quarterback. I’m trying to get our class going in a great direction, and I want to be a big part of that. It’ll help that Texas is in my backyard. We run their offense at Lake Travis, so that’s also a help. I can go up there and learn a lot before I enroll.”

The last Texas quarterback commit to compete at The Opening Finals was Sam Ehlinger, who was on hand Saturday and Sunday as a counselor, leading drills for the next generation of college greats. Ehlinger was also able to attend practices and meeting before enrolling because of his proximity to campus. Card’s focus this week isn’t on following in Ehlinger’s footsteps. He’s at The Opening for the full experience.

“It’s awesome. It’s all the best guys in the country coming in and competing,” Card said on the first day of the event. “It’s a great place to learn and improve.”

Texas’ two highest-rated pledges in the 2020 class play quarterback for powerhouses in Class 6A with Card at Lake Travis and four-star Ja’Quinden Jackson at Duncanville. The commitment of Jackson never impacted Card’s status. He grew up a Longhorn and is ready to embrace the challenges of major college football.

“Ja’Quinden is a great player and we’ll make each other better. I’m excited,” Card said. “There will be competition wherever you go at this level.”

That’s Card, a laid-back kid with a breeze of confident swagger. He first proved it as a sophomore when he moved from quarterback to wide receiver as Matthew Baldwin controlled the offense. Card didn’t pout. He caught 69 passes for 1,137 yards and 13 touchdowns. He became the quarterback as a junior, throwing for 3,543 yards and 40 touchdowns to just four interceptions. He added 619 yards and nine touchdowns on the ground. No quarterback in Austin has recorded those types of numbers since Ehlinger led Westlake to a state title game as a junior.

“It was easy for him to play wide receiver and he enjoyed it. He just wanted to be on the field and contribute. It was a great way to break into varsity football as a sophomore compared to the expectations on a young quarterback,” said Hudson’s father, Doug. “It helps to be in a place with so much history and tradition. He’s obviously in good hands. I can’t imagine a better experience for a high school quarterback and that’s a testament to the culture at Lake Travis. We’re blessed.”

Hudson was offered by Texas in April of 2018. He committed on May 25 of the same year. It was a clear and obvious decision by the life-long Texas fan. The Card family knew the eventual destination pretty quickly once the Longhorns were in the running.

“It wasn’t that day, but we had a family meeting and discussed if there was any place he’d rather go,” Doug recalled. “There wasn’t, so he was able to make that decision quickly.”