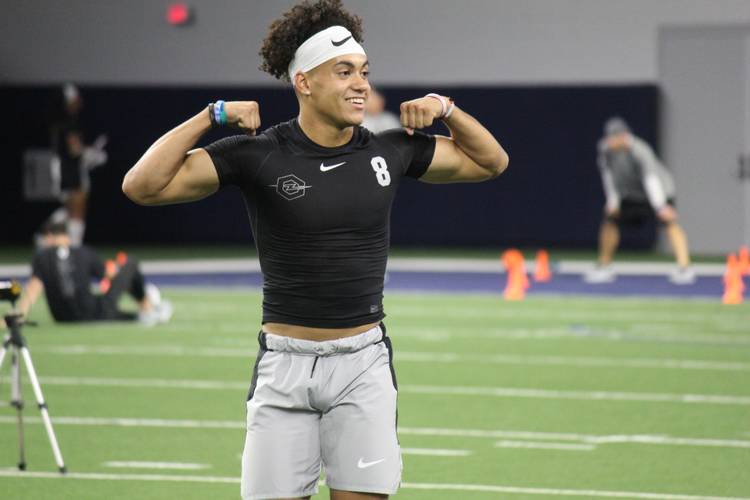 FRISCO — Arlington High School’s Jahari Rogers is among the nation’s best pure athletes in the 2020 class. That’s how a quarterback gets invited to The Opening Finals without much experience at the cornerback position, which is where he’ll play in college. Rogers was fresh off an official visit to Texas during his three-day stay in Frisco for the nation’s premier high school camp.

“I’ve been to Texas three times. It was about getting to know the players on the official and pick their brains about what life is really like down there at Texas,” Rogers said. “The players are the ones living it, so that’s who I wanted the most information from. Every school is going to treat you great on an official visit. I try to do that on every official visit.”

Rogers also took visits to Florida and Arkansas. He hinted at another official or two before the start of his senior season. Right now, it’s a two-team race between the Longhorns and the Gators. The 6-0, 170-pound four-star said, “Florida is just different. The vibe is different.” Rogers also mentioned Tennessee and Georgia as programs still recruiting him. His wants in a program are simple.

“It’ll come down to who is recruiting me the best and who wants me the most,” he said.

Rogers knows he’s behind as a cornerback when it comes to technique simply because he’s yet to play it on a full-time basis at the varsity level. He passed for 2,670 yards and 31 touchdowns as a junior, adding 819 yards and 15 touchdowns on the ground. The Opening provided him an opportunity to cram knowledge from college defensive backs and elite coaches.

“This was real cool. It was my dream to attend The Opening since I was a kid. I get to pick the brains of great defensive backs and coaches,” Rogers said. “I’m learning so much in a short week about technique because I don’t play cornerback every day. I know that, and I’m working on it and willing to improve.”

One of those players was Texas star Caden Sterns.

Another 2020 defensive back close to Sterns is four-star safety Lathan Ransom. Sterns hosted the Salpointe Catholic (Ariz.) product when he took an official visit to Texas on June 14. It was just one trip in a busy six weeks for the nation’s fourth-ranked safety prospect. The 6-0.5, 200-pound playmaker also took official visits to Oklahoma, LSU, Notre Dame and Ohio State. The Buckeyes hold the momentum since Ransom visited there last.

“My family input will help me. I’m going to compare and contrast the programs and go from there,” Ransom said at The Opening. “Texas, Notre Dame, and Ohio State are my final three. I’ll pick between those schools, most likely on July 16 because that’s my birthday.”

Like Rogers, Ransom enjoyed hanging out with his peers in Frisco.

“I got to hang out with a bunch of guys and see what the recruiting process is like and what they’re thinking about doing. It’s been busy, but my family has gotten to visit new places,” he said. “It’s been a great experience.”

Texas is in the mix because of scheme.

“Texas is pitching early playing time. I can make a lot of plays early since they play so many safeties,” Ransom said. “Also, the alumni organization, because everybody knows the Texas brand.”

The four-star safety plays on the same preps squad as five-star running back Bijan Robinson, a fellow Texas target who recently took an official visit to Texas. Ohio State is also in the mix for Robinson.

“Bijan and I aren’t going to change our decision just to play together, but it would be a blessing if it ended up being the same school. We’ve known each other since we were young and have played a lot of football together,” Ransom admitted. “We do compare notes on schools and talk about the process.”

Ransom mentioned Ohio State is among his finalists because of its ability to prepare him for the NFL, while Notre Dame remains in it because of the prestige of the football program and the academics offered in South Bend.

Our 11th annual Top 25 countdown: Defense needs to lead the way early for No. 25 Stanford