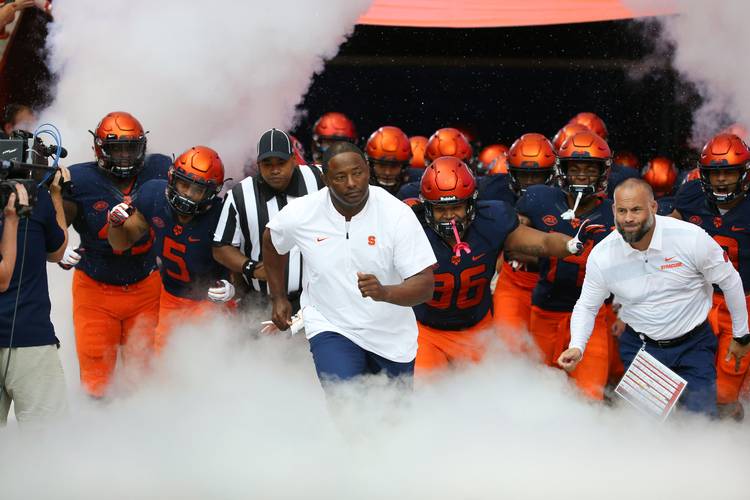 Syracuse Orange head coach Dino Babers (center) leads his team on the field prior to the game against Wagner at the Carrier Dome last season. (Rich Barnes/USA Today)

We’re 55 days away from the 2019 season opener, but it’s never too early to talk college football. We kick off our 11th annual countdown series of our preseason Top 25 as selected by the American-Statesman sports staff. Last year’s eventual CFP semifinalists ranked 1st, 2nd, 8th and 13th in our 2018 poll.

The Orange’s best-case scenario: The Orange won 10 games last year for the first time in 17 years, and they pushed eventual national champion Clemson before falling 23-17 in the Tigers’ closest ACC game of the season. If new quarterback Tommy DeVito can capture just a pinch of the magic shown by last year’s starter Eric Dungey, an impressive defense should help Syracuse secure another 10-win season.

And their worst-case scenario: Worst case? DeVito, an under-recruited redshirt sophomore who doesn’t boast the mobility of Dungey, struggles behind an inexperienced offensive line that must replace three starters. A stout defense can’t hold up under constant pressure, and the Orange drop back to the middle of the ACC pack.

Spring cleaning: Not only does the offensive line lack experience, but it’s also struggling with health. Several projected starters missed the spring game, where the offensive front was manhandled by the Orange’s powerful defensive line. … The Orange must replace their entire linebackers corps, but Babers — a former offensive coordinator at Texas A&M — extolled the play of Andrew Armstrong and Lakiem Williams during spring workouts. … Lightly recruited running back Jawhar Jordan, a freshman from Arizona, had two long touchdown runs in the spring game, although one was called back after a holding penalty.

Robinson rising: Senior defensive end Alton Robinson, a familiar face to high school football fans in Central Texas, has taken a circuitous route to Syracuse while becoming one of the most feared pass rushers in the ACC. A star at Converse Judson, Robinson signed with Texas A&M out of high school but was released from his letter of intent because of a pending felony robbery case. He enrolled at Northeastern Oklahoma A&M and had 14 sacks as a freshman, which ranked third among all junior college players in 2016. After the charges were dropped, he joined Syracuse, where he has become a defensive stalwart in his two seasons at the school. Last year, Robinson 12 games and had 39 tackles and 10 sacks while earning second-team all-conference honors.

Defensive stars: Robinson is part of a ferocious defensive front that ranks sixth in the nation, according to Bleacher Report. Senior and three-year starter Kendall Coleman matched Robinson with 10 sacks, and junior Kingsley Jonathan had five sacks and six tackles for a loss while emerging as a key member of the line’s rotation late in the season. In addition, senior Brandon Berry looks primed for a breakout season.

Putting the lone in Lone Star: The Orange rarely recruit in Texas, and they only have one other player from the Lone Star State after redshirt freshman linebacker Tre Allison told Syracuse.com last week that he planned to transfer “for personal issues.” The 6-2, 233-pound Allison, rated a three-star recruit out of Tyler John Tyler, initially flipped to Syracuse from SMU. He was expected to contend for a spot on the two-deep roster. The Orange’s roster also includes freshman running back Garrison Johnson from Manvel.

The key game? Sept. 14, vs. Clemson. For whatever reason, the Orange have played Clemson tougher than anyone over the past two seasons. Syracuse beat the Tigers 27-24 in 2017 and almost pulled off the upset last year. A win in this conference opener would set the table for a run at the ACC title.

It’s our second Big Ten team of the poll.