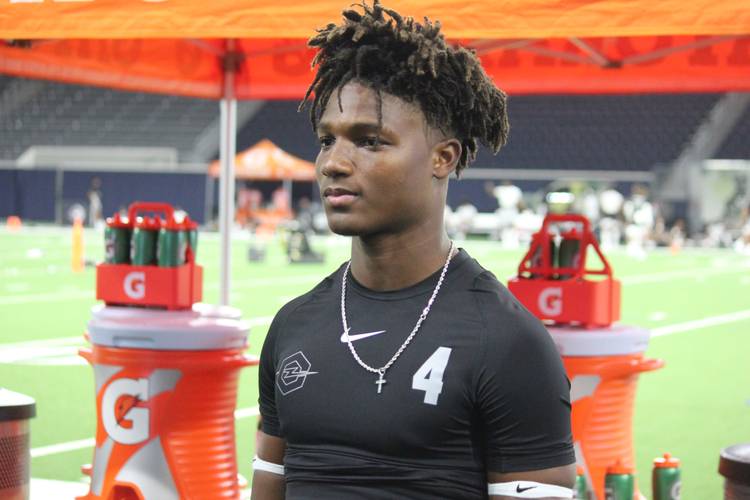 FRISCO — Two Austin-area talents were invited to The Opening Finals in Frisco this past week. One was Lake Travis four-star quarterback Hudson Card, who impressed throughout the entire week and battled fellow in-state quarterback Haynes King for the top spot during the Elite 11 event surrounding The Opening. The other was Manor four-star defensive end Princely Umanmielen.

“It feels good to represent my city,” Umanmielen said. “Not even just Austin, because I’m the second person from Manor to come here after Erick Fowler. I watched him at this event in eighth grade, so it’s real cool. It’s fun for guys like Hudson (Card) and I because our area doesn’t get the same attention as Houston or Dallas.”

Umanmielen is set to commit on Oct. 4. His list of finalists include Texas, Texas A&M and Oklahoma. The 6-4, 256-pound prospect is predicted to pick A&M or Oklahoma for one reason: Scheme. Texas uses an odd-man front on a regular basis, which tasks big-bodied defensive linemen like Umanmielen with taking on double teams. It isn’t the sexiest defense, even though it works.

“I’ll pick a school based on the relationships I have there and how the defense is playing this season,” Umanmielen said. “Scheme is important to me. I’d prefer to play in a four-man front.”

Umanmielen is ranked No. 28 on the 2020 Fabulous 55. He recorded 45 tackles, including 21 behind the line of scrimmage, and 5.5 sacks as a junior. He also forced two fumbles and was named first-team all-district. He’s used to being the biggest and baddest dude on the field. That isn’t true at events like The Opening Final.

“For me, it’s about the experience and the competition. This is a real chance for me to learn from the best and get a small glimpse of what it’ll be like in college,” Umanmielen said. “It comes down to technique when we’re all the same size and strength. It becomes about the little things at this level.”

Another UT defensive target at The Opening Final was four-star safety Xavion Alford. The Alvin Shadow Creek prospect wants to pick a school by the start of the season with Alabama holding most of the momentum. Alford admitted that he already has a school in mind.

“In my head, I have a favorite,” he said. “It’ll be the school I feel most comfortable.”

Participating at The Opening was a goal achieved, not a dream realized for Alford.

“I wrote down a list of goals on my wall as a sophomore when I made it to varsity. One of the things I wanted to do was get to The Opening,” Alford said. “I’m humbled to be here, but I put in a ton of work to get to this point.”

He didn’t travel to Frisco to make friends. The goal-oriented safety went through the three-day competition with a point to prove.

“My goal was to show that I’m the best safety in college. It’s the best event to prove yourself as a player,” Alford said. “If you can do this against these guys, you can compete at a high level in the fall.”