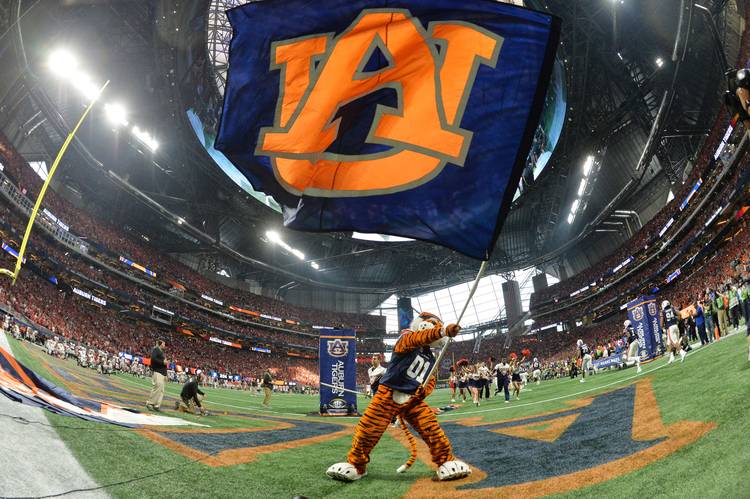 We’re 51 days away from the 2019 season opener, but it’s never too early to talk college football. We kick off our 11th annual countdown series of our preseason Top 25 as selected by the American-Statesman sports staff. Last year’s eventual CFP semifinalists ranked 1st, 2nd, 8th and 13th in our 2018 poll.

The Tigers’ best-case scenario: Auburn dominates both lines of scrimmage, hot-shot quarterback recruit Bo Nix lives up the expectations, and the Tigers beat Alabama. Any other victory is an afterthought for the pilgrims that travel to Toomer’s Corner.

And their worst-case scenario: Worst case? The loss of Jarrett Stidham behind center lingers longer than coach Gus Malzahn envisions, and the Tigers stumble out of the gates in the unforgiving SEC West.

Spring cleaning: While the loss of Stidham to the NFL stings, the arrival of Nix is a nice salve. The son of former Auburn great Patrick Nix earned the label as one of the top dual-threats in the country by recruitniks and should contend for the starting spot. … The Tigers revamped their offense after Malzahn failed to produce a 1,000-yard rusher for the first time in his career as a head coach. Kenny Dillingham arrives from Memphis as the new offensive coordinator and quarterbacks coach, and Malzahn will once again call the plays after three seasons of delegating the duty. … Graduation gutted the receiver spot, but Auburn received a boost with the arrival of graduate transfer Zach Farrar, a nomadic product of Metroplex prep powerhouse Southlake Carroll who has already been a part of programs at Oklahoma, Gulf Coast Community College in Mississippi and Youngstown State. The 6-4, 205-pound Farrer has two seasons of eligibility left.

Good lookin’ big uglies: The Tigers return all five senior starters on the offensive line. That group improved as the season went on, culminated by a dominant performance in a 63-14 win over Purdue in the Peach Bowl. The Tigers’ 56 points by halftime set a record for most points scored in any half of a bowl game.

Welcome back: Much to the delight of Tiger Nation, defensive tackle Derrick Brown passed on a likely first-round selection in the NFL draft and rejoined a veteran unit that also includes Marlon Davidson, Nick Coe, Big Kat Bryant and T.D. Moultry. The 6-5, 325-pound Brown had 45 tackles and 3.5 sacks and enters the year as a favorite for the Outland Trophy, which honors the nation’s top interior lineman.

Hey cuz: Senior running back Kam Martin, a former four-star recruit who weighed offers from Texas A&M and Texas coming out of Port Arthur Memorial, is the cousin of former Longhorns star running back Jamaal Charles. He could have a big season for the Tigers after rushing for 1,231 yards in his first three seasons on The Plains.

The key game? Sept. 21, at Texas A&M. On paper, these two teams seem on opposite trajectories. The rejuvenated Aggies went 5-3 in the SEC in coach Jimbo Fisher’s debut, while Auburn’s three conference wins were its fewest since 2015. The Tigers can change that narrative in the SEC opener for both teams.

This school — the first of only three non-Power Five schools in our poll — had the nation’s No. 2-ranked rushing offense in 2018, averaging 312.5 yards a game.