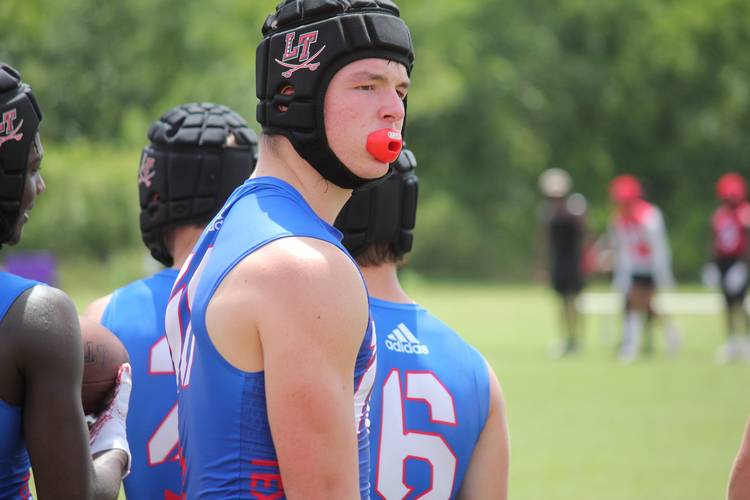 Texas’ 2021 class grew to two members on Tuesday when Lake Travis tight end Lake McRee pledged to the Longhorns. He joins four-star wide receiver Quay Davis as the first two members of that class. McRee plays with 2020 UT quarterback commit Hudson Card and grew up a fan of the Longhorns as he lives just miles from campus. McRee is the 12th-ranked tight end in the 2021 class, per 247Sports’ composite rankings. The 6-4, 202-pound prospect is still new to the position.

I am very thankful to say that I am staying home and committing to THE UNIVERSITY OF TEXAS! #HookEm pic.twitter.com/TyY0d8UpoJ

“I’m shocked at how quickly Lake adapted to the tight end position. Until last fall, he was a quarterback, and a very good one at that,” said Lake Travis head coach Hank Carter. “Lake is a rare talent for a guy his size.”

McRee already held 17 offers and was starting to grab the attention of the other top programs in the country with recent offers like USC. Texas wanted to lock in its top tight end prospect for the 2021 class. McRee caught 17 passes for 274 yards and two touchdowns as a sophomore in his first year at the position. His upside is tremendous because of his combination of size and athleticism.

“Lake is a rare talent for a guy his size,” Carter said. “He plays basketball, as well, and that experience has helped him immensely when it comes to body control and catching the football. He has a great motor and is a physical player. I believe the sky is the limit for him.”

There wasn’t much need for McRee to hold off on his decision. The talented youngster knew his final destination.

“The result would’ve been the same three months from now, or even a year from now,” McRee said of his commitment. “I asked myself, ‘if I had every offer in the country, where would I go?’ and the answer was Texas. I talked to my parents and coaches, and then called Texas to pull the trigger.”

Skill set: McRee is still early in his development as a tight end. What’s clear is that the Lake Travis star possesses the physical traits to become a dominant force at the position with his 6-4 frame and basketball experience. He moves well for a kid growing into being a three-down tight end capable of in-line blocking. He’ll likely reach 230 pounds before he even steps foot on campus in the summer of 2021. McRee is already a gifted receiver with an excellent understanding of how to use his big body to block out defenders in much the same way he attacks rebounds for Lake Travis’ basketball team.

The former quarterback has a high football IQ and understands the needs of a wide receiver. Card is McRee’s quarterback in high school and the two have another year of football together to continue building their bond.

“He’s an excellent player, and an even better teammate,” Card said. “It’s going to be fun continuing our relationship on and off the field once we’re at Texas. I think he’s going to be a great player for us at Lake Travis and at Texas.”

Immediate impact: It’s nearly impossible to predict the outlook at the tight end position by the time McRee arrives in two summers. Starting tight end and former Cavalier, Cade Brewer, should be entering his senior year entrenched as the starter when McRee arrives. That’s a good thing for the young tight end, who can watch and learn behind a familiar face as he continues his progression at the position.

Texas also signed Brayden Liebrock and Jared Wiiley in 2019. Bishop Dunne running back Jaden Hullaby is committed to Texas in the 2020 class and could spend time at tight end once he arrives. It’s a position that doesn’t require instant help and that’s a good thing for Texas and McRee. He’ll get to organically work his way into the college game instead of being thrust into the spotlight before he’s ready.

Fitting into the program: The Austin flavor is growing on Texas’ program with quarterback Sam Ehlinger and Brewer expected to start in 2019. Card is the area’s top player in the 2019 class and he was UT’s first pledge of the cycle last summer. McRee should fit in easily with his proximity to campus. He and Card can make frequent trips to campus this season and observe UT practices and meetings, gaining a head start on their peers. Texas’ offense needs versatile tight ends to work properly and McRee is another athletic piece who can cause mismatch problems for smaller defensive backs or slower linebackers.

Recruiting at the position: It would not be a surprise if Texas went after a second tight end in 2021 if UT can’t find a true tight end prospect that it likes in 2020. Hullaby will get looks at the position, but he’s not a three-down tight end in the same mold as McRee. McRee is a great piece and Texas could shut it down if it feels good with the tight ends on campus. If not, Spring Dekaney’s Var’Keyes Gumms is the only other in-state tight end in the 2021 class to hold a Texas offer.

Our 11th annual Top 25 countdown: No. 19 Auburn needs a freshman to grow up quickly