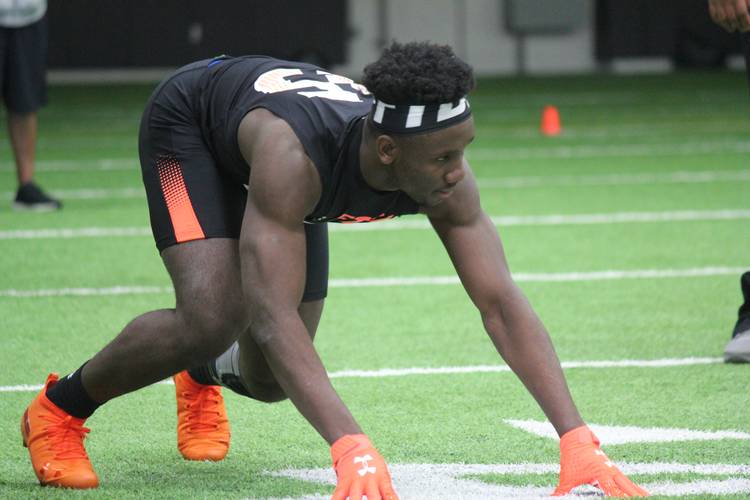 Texas, needing a jolt on the recruiting trail, received just that on Tuesday when Highland Park four-star Prince Dorbah pledged to the Longhorns. The 6-2, 208-pound edge rusher plays defensive end at Highland Park. He’s expected to move to B-backer at Texas, tasked with attacking the passer off the edge and occasionally dropping into coverage. Joseph Ossai, a fellow prep defensive end, is expected to start at the position this season. Dorbah has recorded 30 sacks over the past two years and is No. 19 on the 2020 Fabulous 55.

Dorbah is Texas’ eighth commitment in the 2020 class, and just the second on the defensive side of the ball, joining Tyler John Tyler cornerback Kitan Crawford. Dorbah is yet another Dallas-Fort Worth prospect pledged to Texas. The Longhorns struggled in DFW during Tom Herman’s first two full cycles as head coach, but Dorbah joins fellow DFW prospects Ja’Quinden Jackson, Jake Majors and Jaden Hullaby in Texas’ 2020 class. Dorbah is the seventh-best outside linebacker in the 2020 cycle, per 247Sports’ composite rankings.

Skill set: Dorbah is uniquely gifted at rushing off the edge. He’s not the longest or the strongest or the fastest, but he understands angles and does a great job using his hands to get offensive linemen off balance. Playing at Highland Park, a prestigious Class 5A program in Dallas, has allowed Dorbah to blossom as a young athlete with elite coaching and facilities. He’s a multiple state champion whose shown up in the biggest games of his career.

Dorbah isn’t big enough to play defensive end full-time in Texas’ preferred odd-man front. He’ll make the transition to B-backer in the same vein as Ossai, who came on late last year as a freshman and is expected to start at the position as a sophomore. Dorbah can be the natural replacement with the two sharing similar builds, athletic prowess and background as ends.

Immediate impact: Dorbah will enter campus behind Ossai and Byron Vaughns. It’ll be hard to make a dent with two talented players in front of him, but Texas values athleticism and the edge rush. Modern offenses demand defenses to possess depth. Dorbah can specialize in pass rushing situations as a true freshman as he grows into a complete outside linebacker. He should also be a contributor on special teams.

Fitting into the program: The Dallas-to-Austin movement is growing by the month and Dorbah is just another reason to believe that Texas’ momentum in DFW is real with assistant coach Rashaad Samples leading the charge. Texas relishes elite athletes on the defensive side of the ball who are capable of filling multiple roles. Dorbah is potentially one of those players who can specialize at B-backer while also contributing in other areas to help defensive coordinator Todd Orlando disguise schemes.

Recruiting at the position: Dorbah is Texas’ first commitment at linebacker for 2020. It’s not the best year for linebackers, so it is possible that the Longhorns wait to use the remaining scholarships designated for the position in the 2021 class when a plethora of in-state talent comes into play. Another player to watch at the position is Dallas Bishop Dunne four-star outside linebacker Brennon Scott. The 6-1, 230-pound prospect can play every linebacker position or grow into a big defensive end. Athens Academy (Ga.) inside linebacker Len’Neth Whitehead is a name to know at inside linebacker.

Our 11th annual Top 25 countdown: No. 19 Auburn needs a freshman to grow up quickly

Our 11th annual Top 25 countdown: No. 18 Army might throw a real wrench at the CFP